How Social Media War Was Waged in Gaza-Israel Conflict 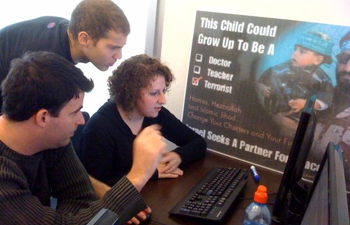 Both sides deployed dangerous new media weapons during this latest round of fighting in Gaza. Armed with Facebook profiles, Twitter accounts, and Lavazza espresso, warriors fearlessly and tirelessly scoured the cyber battlefield searching for enemy (blog) outposts. Outfitted with high-tech ammunition like HD videocameras, firewire 800s, and white phosphorescent keyboards, they attacked one-sided videos, slanted essays, and enemy propaganda with propaganda of their own. Instead of grad rockets, they launched grad school wits. Instead of anti-tank missiles, they battled with anti-spamming technology. In 22 days of combat in Gaza, these were the young fighters tasked with winning the merciless war of public opinion for their side.

Social media is an effective way of providing the right information passively." -- Ahuva Berger, Stand With Us
Social media recruits briefed in the Interdisciplinary Center of Herzliya

Niv Calderon, 29, commanded an Israeli social media war room. The day before the war broke out, he was worried about his high-tech start up and moving apartments. But once bombs began falling, he dropped his daily activities and connected himself with Stand With Us, a U.S.-based Israel advocacy group. They hired him to organize an ad-hoc social media “command center” to promote a pro-Israel viewpoint.

“It wasn’t about the money at all. I would have done it for free. It was all from the heart,” Calderon told me in an interview. Calderon’s first step was to organize a group of about 20 media-savvy internationals who spoke French, German, Dutch, Russian, English and Spanish and were willing to go AWOL from their day jobs for a few weeks. Ahuva Berger, an American immigrant to Israel now working in Israeli startups, regularly reported for duty.

“We are fighting against the mainstream media who prefer to ignore certain bits of information about Israel,” Berger told me in an interview, “and social media is an effective way of providing the right information passively.”

The group called themselves “Help Us Win,” and created a website with the same name, serving as an online database for news with a pro-Israel viewpoint. They worked in an office donated by a local college, the Interdisciplinary Center of Herzliya, which also provided office equipment and Internet access. There they spent countless hours scanning the Internet for what they saw as biased blog posts and erroneous news stories, as well as other opportunities to tell their side of the story.

The group hoped to show the world that Israel was fighting Hamas rather than regular Palestinians. They worked to influence online discussions on YouTube, Facebook, and Al Jazeera, and tried to change the commonly used language of the war — they referred to Hamas as terrorists rather than fighters and to the “War on Hamas” rather than the “War on Gaza.”

The Israeli Defense Forces (IDF) also plunged into new media during this war. Their drones filmed many of the targeted strikes on Gaza, releasing the video to the general public on a YouTube channel. This channel became an instant hit, with nearly 5 million views in its first week. The most popular videos on the site were the surreal aerial-cam attack videos, which have a detached, robotic feel that provides a stark contrast to the more palpable videos filmed on the Gaza streets.

The site also features the IDF’s lone Arabic spokesmen, Avichai Adraee, who addressed the Arab world by playing Quranic excerpts over IDF footage in an attempt to prove that Hamas violated Islamic Law by fighting out of mosques. The IDF said it had learned many media lessons from the Lebanon War in 2006. The major lesson, according to IDF spokeswoman Major Avital Leibovich, was “transparency.” Leibovich said in an interview that they hoped the YouTube channel would show the world that “Israel is a moral army with nothing to hide.”

But if this is so, why were accredited foreign journalists banned from entering the Gaza Strip during the war? Leibovich declined to comment on this, saying that was a government — not a military — decision. Other sources have reported that this was another strategic lesson from Lebanon, when journalists gave away army positions on live TV and distracted military operations, but also that the move may have had more to do with public relations than military tactics.

[Editor’s Note: As Aram Zucker-Scharff points out in comments, another watershed moment of the war was when the Israeli Foreign Ministry had a press conference on Twitter, and he covered it for the UPI.]

“Israel didn’t let in the foreign journalists because they didn’t want the world to see a massacre,” Gazan blogger Sameh Habeeb told me in an interview. Habeeb, 23, from the eastern suburbs of Gaza City, had just graduated with a B.A. in English Literature at the Islamic University in Gaza when he began writing his blog to show the world what it is like for “Palestinians living under siege.”

Before the war, Habeeb described himself as a humanitarian aid worker, a peace activist, and a part-time photojournalist. But during the war he described himself as a sleep deprived, manic 24-hour reporter for many of the world’s top media outlets: “CNN, CBC, CBS, BBC, Sky News, Brazilian media, Liberacion, Le Monde, the Independent, South African News, Indonesian News, and some more that I can’t remember, I worked for all of them.” With their reporters locked out of Gaza, these foreign agencies were scrambling to find new sources of information, and, upon searching the Internet, Sameh’s blog, Gaza Strip: The Untold Story, came up.

Between doing live stand-ups for Dutch TV for the first time and dodging Israeli tank shells, Habeeb somehow managed to update his blog daily during the war. Each day, he provided daily feeds with statistics that were relied upon by the mainstream media. The grim numbers were trusted by many of the mainstream news outlets. Habeeb operated just like a regular journalist would. His home became a very busy one-man international news bureau. His home phone and cell phone rang off the hook. He monitored several local radio stations which were run either by Hamas, Fatah, or the Popular Front.

He regularly checked in with contacts in human rights organizations. He tapped into an organically fused network of local Palestinian journalists, each one passing on data to the next. At night, when the reporters for Al Jazeera slept, he was their stand-by reporter should anything happen. Once a new incident occurred that involved casualties, he would call one of his contacts in the Shifa Hospital, or the head of the ambulance service, to verify the number of wounded or dead. On several occasions he visited the hospital in person. He remembers on the first day of the war being shocked after seeing “rows of people missing legs, heads, arms, or all three.” He cried on his first day in the hospital, but hasn’t shed a tear since then.

During the war he received numerous threatening emails from extremists. They didn’t identify themselves, but they always wrote the same thing, which can be summarized as: “Stop writing lies or you will pay for it.” Habeeb was not intimidated by these threats nor the IDF drones hovering over his house. He didn’t miss a single day’s post during the war.

Now that it is over, and the international news media is allowed back into Gaza, Habeeb is less busy. Life has gone back to normal in Gaza and Southern Israel, which means a rocket here, a missile there. But Habeeb seems changed by the experience, and may find himself in this role again should another full scale war break out. The likelihood of this happening is very high due to the very fragile and oft-violated ceasefire in place between the two sides.

“I didn’t approach my work as a Palestinian but as an objective journalist,” Habeeb said. “It was most important to me that my information be credible and reliable.” His blog broke through the fog of war and became a powerful news-gathering and distribution tool. Sometimes he got paid for his work, sometimes he didn’t, but Habeeb said he didn’t care.

“I didn’t work for the money, but so the world could see what was going on here on our side. This is what motivated me.” The popularity of his blog soared during the war, attracting hundreds of new visitors a day. Most significantly, a blogger had bypassed efforts to hermetically seal the Gaza Strip from the world.

It turns out that Hamas’ military wing also has an official and active Internet presence, the Ezzeddeen Al Qassam Martyrs Brigades Information Office, which links up to a website. The site also offers statistics and numbers from the war, which, of course, do not match up to those of the IDF. The home page features pictures of “martyrs,” links to an English forum, and a poll where one can vote whether Hamas should continue the resistance, pursue a political path, or both.

It’s not clear whether these votes will have any effect on Hamas policy, because my numerous attempts to interview them were declined. Clearly though, the rules of public opinion warfare have changed due to the emergence of new, social media tools.