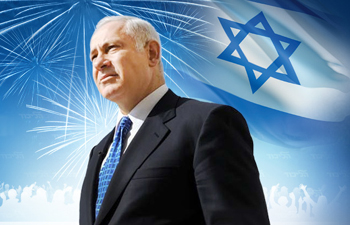 From the home page of Benjamin Netanyahu's official Obama-inspired website

The potential of social media in political campaigns has quickly been realized in Israel, where candidates took note of online media’s big impact on the recent U.S. election. Internet connectivity in the solitary Middle Eastern democracy is higher than any country in the region, and is on par with much of Europe. More than half of Israel’s 7 million people have Internet access, either at home or at work.

We were all affected by Obama-mania." -- Sa'ar Vardi, Kadima Party

The recently held Israeli parliamentary election was a hotly contested race, between leading candidates Tzipi Livni of the Kadima Party and Benjamin Netanyahu of the Likud Party. According to pollsters, 30 percent of Israelis were undecided just a few weeks before the election. Each candidate knew the importance of the Internet in winning the hearts and minds of Israeli voters.

“We were all affected by Obama-mania,” said the editor of the official Kadima website, Sa’ar Vardi, in an interview at Kadima Party headquarters in Tel Aviv on the eve of the February 10 Israeli elections. Obama’s campaign did more than just transcend the racial barrier in the U.S. It also transcended the online barrier in a campaign the entire world was watching.

Here’s more of my interview with Vardi:

Sarit Harel, a professional digital campaigner for the PR/advertising firm EuroRSCG-Israel, was the woman behind Livni’s social media campaign. Her first step, even before creating the official Kadima Party website, was creating Livni’s personal blog. This became the centerpiece of the online campaign, receiving around 20,000 unique hits a day leading up to the election. “The idea was to put Tzipi’s videos and message everywhere Israelis can be found on the Internet, and always mirror this same information on the blog,” Harel told me in an interview.

Harel’s strategy proved to be both effective and cheap. She found the most popular Israeli websites that allowed free, user generated content — Tapuz, Israblog, and The Marker — and uploaded videos of Tzipi Livni there for all of Israel to see. The videos were short, personal appeals to Israeli voters shot in intimate locations such as her home staircase or the inside of her limousine.

Here’s one of Livni’s videos:

“Tzipi (Livni) understood the power of the Internet in this election,” said Harel, “That’s why she allowed a camera crew and photographers into her house almost every single day.” The photos were posted to Flickr, while the videos were posted to YouTube and Facebook. Real time updates were provided on Twitter. All this was done for free; the only direct digital marketing cost incurred by Kadima was to pay Google for their search ads.

The digital effort brought 1.2 million unique visitors to the blog (nearly 20 percent of Israel’s population) in the 90 days leading up to the election. Most significantly, it was done with almost no direct marketing costs. The bulk of Kadima’s advertising budget was spent on television, print, radio, and billboard ads. There is a growing sense that the traditional political advertising methods may not yield the best bang for the buck (or Israeli shekel). “The return on investment (ROI) when it comes to digital campaigns makes it a much more attractive option than the mainstream media, and it will become more and more popular in the future,” said Harel.

Netanyahu’s website designer, Kobi Haddad, CEO of KCSnet, an Israeli web design company, boasted of similar success. “We had to host our site on two servers to deal with the number of hits we were getting,” he said in an interview. Haddad admits that Likud asked him to take the main concept design from Barack Obama’s campaign website. But digging deeper, the Likud site revealed some unique social functions that the Obama’s site didn’t have. (For Netanyahu’s more bare-bones English website, click here.)

Haddad’s crew essentially designed the site to become an automated virtual campaign headquarters. They built a system where surfers could log in, create a pro-Netanyahu blog, post a pro-Netanyahu video, or host a non-virtual, pro-Netanyahu event. “There were a lot of people that wanted to help but didn’t know how,” said Haddad, “so we provided the tools.”

The website enabled users to become their own regional campaign managers, allowing them to connect to other people in their region and enlist them for the cause. One unique tool was a system where volunteers could receive up to 30 telephone numbers a day and a dynamic script for each one that varied according to the person’s location and gender. The volunteer would then mark how responsive the person was to a pro-Netanyahu message. That information would automatically be relayed to Likud headquarters, which would follow up with an email or SMS. The more enthusiastic supporters were then urged to enlist as real-life or cyber-campaigners.

“Our online effort was not just to get votes, but to motivate supporters to volunteer for us,” said Sani Sanilevich, Likud’s digital campaign manager. According to Sanilevich, the effort paid off, and Likud was able to amass 12,000 volunteers, many of whom were operating from home, following the website-generated script, making 30 phone calls a day.

Netanyahu delivered daily Internet video messages that appeared on his website, YouTube, and Facebook. In the video below, he speaks from the Southern Israeli city of Ashkelon about a grad missile that landed there that morning:

On election day, the website of each candidate’s site transformed itself into a fresh, exciting version of itself. Both had new videos of the candidates voting at their polling stations, and last minute online pleas for votes. Despite being favored in the polls for weeks leading up to the elections, Netanyahu received one less mandate than Livni on election day. Still, under Israel’s parliamentary system, Netanyahu has been charged with forming the next government, and will likely become the country’s next prime minister. He will be joined there by his digital campaign manager Sanilevich, a valuable asset in today’s political environment. And like Obama, Netanyahu doesn’t plan on burning his digital bridges once he’s in the government. “We are keeping the website going,” said Sanilevich, “and will be brainstorming even more ways to connect with people online.”