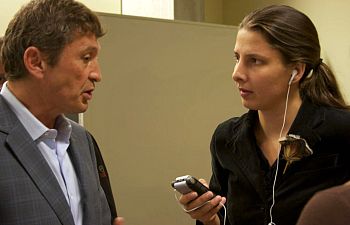 One of my students landed her first A1 story on Monday. Amanda Ash’s story on auditions for the sequel to the teen vampire blockbuster “Twilight” was splashed across the front page of the Vancouver Sun. But she first alerted me, and her 130 other followers on Twitter, to the tears and tantrums at the event on Sunday evening when it was published on the Sun’s website.

Amanda is among a handful of journalism students at the j-school at the University of British Columbia who have taken Twitter as part of their journalist’s toolkit. Her tweets mix the personal and the professional, discussing whom she is interviewing or asking where to watch the Grammy awards ceremony online. Another student, Dawn Paley, who contributes to a grassroots news co-operative, recently joined the micro-blogging service. In her Twitter stream, she shares her experiences as part of a media co-op and highlights alternative stories missing in the mainstream media. They are taking part in the world of social media.

Twitter is just one example of the new social media avenues available to student journalists to build up a profile while they are preparing to enter the profession. When I did my journalism degree at City University in London 20 years ago, I would send out my CV and cuttings to prospective employees and hope to get noticed. Today’s students should be building up their professional persona online through social media, creating a digital identity as an ambitious, engaged and curious reporter.

Social media platforms such as Twitter enable budding reporters to be part of a more open journalistic culture. Traditionally, the work of journalism has been hidden behind the walls of the newsroom. Through social media, journalists can be more open about their work, offering insights into the process of news, and connect with audiences in a way that simply wasn’t possible a generation ago.

Yet as other journalism profs have discovered, some students hesitate to adopt the tools of social media. Paul Bradshaw uses Twitter in his online journalism module at Birmingham City University and gets his students to set up accounts, but still admits that it’s often a struggle to demonstrate the usefulness of Twitter. This is more than just about Twitter. Andy Dickinson who teaches at the University of Central Lancashire summed it up in one of his New Year resolutions:

I’m convinced that if you are journalist who isn’t curious about the web then you may find yourself seriously limited as the industry shifts or worse still, not being a journalist for very long.

In social media, a budding journalist has an incredible platform to demonstrate their talents and engage with others in a way that just wasn’t possible when I was in journalism school. At the very least, students should have a website that contains everything they produce, better still if they have a blog which invites comments and discussions.

Your blog as your business card

Quite a few students are doing this now. Brent Wittmeier, Jesse Kline and Rosemary Keevil-Fairburn are just three who run comprehensive sites where they blog and showcase their professional and academic work.

Amanda Ash discusses her work as a budding journalist on Twitter

They were smart and snatched up their names as web addresses. This is one of the first things I asked new students to do at the start of the term in September. It usually sets off a flurry of activity in the classroom as they race online to see if someone else has already grabbed this important chunk of online real estate.

It seems like an obvious point, but I am surprised by how few students realize the importance of establishing your digital identity, starting with your domain name, at a time when the website is the business card of the 21st century.

Running a blog has additional benefits. Not only does writing on a regular schedule make you smarter, it also shows spirit and attitude and a thirst for learning and sharing. Just about every news editor I talked to now expects a journalism student to have blogged.

Understandably, some students may be wary about exposing their writing while they are still learning the profession. But a blog can show how their writing and ideas have improved over time, providing a living example of the evolution of a student’s skills. And it almost goes without saying that it is a way to show passion and knowledge about a particular topic, such as Sarah Berman’s blog on music, art and culture in Canada’s poorest zip code.

Blogging can also help open doors. One enterprising student turned a class blog assignment into a gig blogging for Canada’s newsweekly magazine, Macleans.ca. Josh DeHaas pitched his class blog idea on the cost of a university education to the Maclean’s On Campus editor and was taken on as a student blogger. It’s a wonderful opportunity for DeHaas, who hopes to join Macleans when he graduates. It also means that he can add his voice as a student to the debate in Canada over how to pay for a university education.

Being active online, sharing experiences and engaging with audiences is fundamental for students looking to enter journalism. It is even more important at a time when journalism students are uneasy about their job prospects. Budding journalists have always had to work hard to get themselves established. But the emergence of social media, through platforms such as Twitter, has added a new dimension to this, one that the reporters of tomorrow cannot afford to ignore.

22 responses to “Budding Journalists Use Twitter, Blogs to Open Doors”