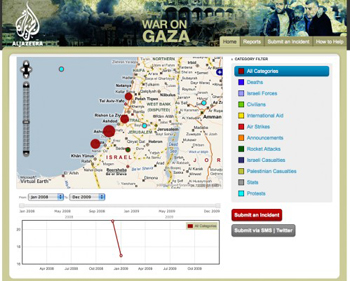 Bloggers have always been timely in their response to local, regional and international crises and Kenyan bloggers were no different when violence broke out following the December 2007 elections. Within nine days Ushahidi, “a platform that crowdsources crisis information,” was born.

But that open source platform is now being “localized” to cover conflicts in other global hotspots, including in the Democratic Republic of the Congo (DRC) and in Gaza.

Ushahidi is not, of course, the first dedicated software or action designed in response to a crisis. Take for example the following: In August 2005, Katrina struck New Orleans. In December 2005 it was the South East Asian Tsunami, and later there was the Mumbai terror attack, and this year the war against Gaza. In each case, the blogosphere has reacted in a timely and innovative fashion, using the most up to date technologies available at the time.

In the case of the Tsunami, The South-East Asia Earthquake and Tsunami Blog (SEA–EAT) was started to document the disaster as well as to raise funds for the victims. “Help needed” and “Help offered” features were two of the options on the blog which enabled ordinary citizens to work together to provide as much support and relief as possible given the huge area hit by the tsunami. SEA–EAT remains an active blog which has created the necessary infrastructure to manage and document any other disasters in the future. However, Ushahidi differs from previous responses in that the design is easily customized and can be adapted to a wide range of situations and needs. According to its website:

The Ushahidi Engine is a platform that allows anyone to gather distributed data via SMS, email or web and visualize it on a map or timeline. Our goal is to create the simplest way of aggregating information from the public for use in crisis response.

The developers of Ushahidi could have limited their idea to Kenya, but instead they had the vision and commitment to realize they had created an open source platform that could be used to monitor and document any crisis in any environment — whether natural disaster, war, or political turmoil. In November of last year, Ushahidi released Ushahidi DRC customized for the Democratic Republic of the Congo (DRC).

Discussing some of the issues raised in the DRC version, Ushahidi co-founder Ory Okolloh, explained that it has not been easy to “localize” the platform.

Ushahidi works best in areas where there is already an active local blogging community and a way to ensure timely and quality translation. Ushahidi worked well in Kenya because of the maturity and community of Kenyan bloggers. Most were already familiar with each other and members of the Kenyan blogging community, Kenya Unlimited. In addition, many Kenyan bloggers possessed considerable technological skills — which meant they could see the potential of a site like Ushahidi. However, the DRC was a different story. As Ory Okolloh said:

While we did not have an unrealistic expectation about us getting thousands of reports given the challenges above, we certainly expected more than we have received so far. So I have been racking my brain trying to figure out what we could be doing better and why exactly the DRC has been a hard nut to crack, not just because I’d like to see the tool working better for the people affected by the crisis but also because it could provide useful lessons for us in the future.

The Middle Eastern blogosphere and Twittersphere have responded quickly to the situation in Gaza, providing minute-by-minute updates on casualties, attacks and so on. In Egypt, a highly politicized group of bloggers has been active on Jaiku since Twitter suspended its outgoing SMS to the country. Bloggers such as Arabway and Gaza have been microblogging the conflict as well. Other Egyptian bloggers highly critical of their government’s response to the war on Gaza are Egyptian Chronicles and Mona Eltahawy.

It is not surprising then to learn that Al-Jazeera contacted the Ushahidi team over the New Year via Twitter, email and Skype, and within days had used the platform to create a War on Gaza site. This site is integrated with Twitter (used to submit reports and also available as updates on their Gaza Twitter feed). The Al-Jazeera site is slightly more comprehensive than the DRC or the Kenyan sites as it includes Al-Jazeera news updates and video.

Although traditional news media, newspapers, and TV news still have a crucial role, bloggers and microbloggers are creating new ways of presenting news. They are able to react in a much more timely manner as well as report from a grassroots perspective. As they are free from editorial constraints, they can deliver a much broader set of opinions and understandings than the mainstream media can.

One of the reasons why Ushahidi works so well for the blogging community is its transferability and flexibility — it can be used in conjunction with other Web 2.0 and traditional Internet tools like video, news reports and microblogging. For example, there is no reason why Egyptian bloggers cannot use the platform to document and monitor incidents of police violence against demonstrations or in the long term for generally recording oppressive actions of the government. Somewhere down the line it is possible that Ushahidi, developed in Africa, could become as ubiquitous as YouTube or Flickr as a social media tool.

Sokari Ekine is an activist with a background in human rights in Africa. Sokari blogs at Black Looks and New Internationalist, and is the African correspondent for MediaShift.