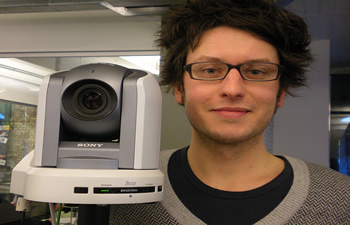 My colleague Jan standing next to a fixed camera in the newsroom. (Photo by Sarah Godard)

Video is one of those new practices we have to get used to as newspaper journalists now working in a Web 2.0 world. One of the key issues is the quality of the video. Do we always need slick, television-style video, which require more specialized skills, or will our community accept “rougher” video, made by amateurs using less sophisticated cameras?

At the Belgian business newspapers De Tijd and L’Echo we use five main video techniques now: prosumer cameras, consumer-type camcorders, Seesmic (webcams) and Flip cameras, and two Sony cameras on a fixed installation for interviews in the center of the newsroom.

My colleagues at L'Echo were so enthusiastic about the Flip that they produced more video in one week than in the whole year previous."

I will briefly discuss who is doing what with which cameras, concluding with some issues we are debating these days.

Prosumer cameras are mainly used by our two experienced full-time video journalists. One of them filmed this interview between a newspaper colleague and the Israeli vice-prime minister Meir Sheetrit. It is web/TV-style, and the newspaper interviewer seems to be a bit nervous in his new role as video interviewer.

Another notable prosumer video piece is this company portrait of the brewer Duvel Moortgat.
These videos require knowledge and skill regarding composition, light, sound, camera movements. Most newspaper and Internet journalists are happy to leave this work to their two specialized colleagues, limiting their contribution to appearing on camera as an interviewee or an interviewer.

There are some exceptions. Some young newspaper colleagues learned the basics of video production (camera work, Final Cut Pro, etc.) at school, and would like to produce video. The workload of the print and online production does not allow them to do so. However, we hope to reorganize the workload in such a way that the Internet desk journalists will have more time to practice their video skills.

Even though ultimately we would like all journalists to have some basic video skills, we now want a group of specialized Internet journalists to acquire all kinds of multimedia and social media skills.

We use yet another type of camera, two fixed Sony cameras (see the picture at right with my colleague standing next to the camera). They are used for interviews between journalists in the midst of the newsroom. The sound technique is advanced enough to get good audio results despite the considerable background noise. Recording is not difficult but involves three people: the interviewer, the interviewee and one person at the technical desk.

We did some experiments with a regular Canon HD camcorder, for instance, this interview with a left wing protester. I integrated this video in a blog post. The HF 100 HD Canon is easy to use and has the advantage that one can use a headset to monitor the sound quality. Alas, even this camera seems to be too intimidating for those colleagues who don’t have a camcorder at home — and there are surprisingly many of them.

One of the very nice aspects of blogs is that one can experiment without disturbing your more apprehensive newsroom colleagues. Seesmic is a video conversation service, a kind of video-Twitter that lets you record video messages with a webcam.

Its advantage is its simplicity: just push a red button and your webcam activates itself, you deliver your message, check the result and publish. The nicest aspect is that people can just as easily video-respond to your message. I tried this out at a conference, interviewing people in front of a webcam.

There are some problems as well. The standard laptops in our newsroom are office laptops without webcams. Journalists seem to consider it rather weird to start talking to their laptops. Most disappointing is that even though nobody in the community objected to the rough format, nobody responded with their own video message either. So much for interactivity!

The reasons for this may be specific to our community. Many people who work in financial institutions visit our website during work hours. While reading texts on a business website is acceptable in their offices, watching videos is not, and responding to them even less so. I also suspect that their computers may not have webcams installed.

There is a saying regarding online anonymity: “Nobody on the Internet knows you are a dog.” This does not apply to Seesmic. Many of our site visitors like to speak out using nicknames when they are discussing sensitive financial matters or professional issues, but I would guess they don’t like to make their comments with their faces visible on camera.

While the prosumer cameras and the whole process of editing and uploading the video materials is intimidating for most newspaper journalists, this is not the case for the toy-like Flip cameras. Recording is just an issue of pushing a button and uploading is very easy.

For the moment we do not use the HD-versions of the Flip; we’ll have to import them. The regular Flips we use are clearly less sophisticated in image and sound quality than the prosumer cameras (I’m not sure where in the process this loss of quality happens, because the net result on YouTube is much worse compared to the original file on the Flip camera).

For an example, have a look at this interview with a colleague Peter about the banking crisis. I have to hold the camera rather close to his face to get good sound (there is no jacket for a clip-on microphone on my Flip), but it somehow captures the feeling of being in the midst of the newsroom.

Another important aspect: This video is embedded in the blog post. It is more informal, and context is given in the text.

My French-speaking colleagues of L’Echo were so enthusiastic about the Flip that they produced more video in one week than in the whole year previous. They decided not to embed the videos in blog posts, but rather to attach them to main news stories on the home page.

The multimedia producers were not pleased, and neither were some newsroom managers. L’Echo and De Tijd are business newspapers and want to project a slick image. The Flip videos are very cool but rather rough. They look unprofessional, some say. On the Dutch language website, we embed the “rough stuff” (Flips, webcams, camcorder) in blog posts, a practice which seems acceptable to everyone.

Until now, the audience has not complained. The reactions I got on our Flips all concerned content. I also have the impression that it helps to deepen the relationship between our community and the journalists, who literally get a face and a voice. People respond on the videos by mail, addressing us by our first name and initiating very informal and friendly conversations.

The question is: Should rough video work be solely embedded in a blog context or is it all right to publish it on the home page? Or, even more fundamentally, is a Flip a poor excuse for video, a kind of we-would-like-to-do-video-but-we-cannot?

I, for one, love the Flip. We are constantly struggling for time and the workload seems to get heavier every week. The Flip (or similar cameras such as the Vado) is easy to use and above all it allows for very fast video production. You can slip in into your pocket and this small, easy-to-use camera will not intimidate either the journalist or the interviewee. In one word, it is fun to use. Maybe it is a good stepping stone to encourage journalists to go further and start using more sophisticated cameras later on.

The issue boils down to this: Newspaper journalists in our newsroom have no training at all in using video in a sophisticated way. We can set up a training program, but that will take time and still only a minority of journalists will feel inclined to make video a priority. Using simple cameras and a rough style gives immediate results; more videos are published and the community seems to appreciate this additional connection. Finally, those first steps with easy-to-use cameras can convince more people to acquire better skills.

I’d love to hear about your take regarding “rough video” and the Flips of this world. Share your thoughts in the comments below.

11 responses to “The Big Video Debate: Rough or Slick?”