Experimentation (Not Stagnation) Should Flourish at J-Schools 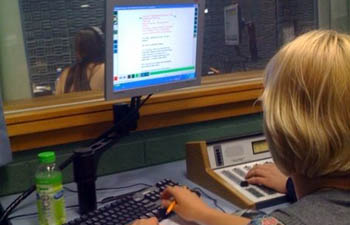 Radio journalism students producing a program for broadcast at the University of Canberra.

Some journalism academics may be even more scared of new technology and more resistant to change than the worst print “dinosaurs” working in media today. But Web 2.0 has made getting online so simple that there are no more excuses for being disconnected. While some reporters see journalism education as a potential refuge from the rapid pace of change in the 21st century digital newsroom, journalism schools should in fact be among the first places to adapt to new technology if they’re to train the journalists of tomorrow and remain relevant today.

I have been working to integrate blogs and other social media into my teaching, but traditional academia’s inherent resistance to educational experimentation — as well as fears around defamation litigation, autonomous student publication, and public relations fallout — can make embracing the journalism of the digital age even more difficult in the classroom than in the newsroom.

They imagine journalism schools to be lofty places where they can continue their careers as public intellectuals while avoiding the pace of change...But this reasoning is flawed."

I’m an Australian journalism educator at the University of Canberra and with this post I’ll begin regular contributions to MediaShift as an embedded J-teacher attempting to adapt traditional radio and television journalism classes to suit a 21st century media environment which is, as most people reading this would likely acknowledge, increasingly online and increasingly interactive.

My professional journalistic background is as a news and current affairs journalist with a career concentrated at the Australian Broadcasting Corporation (ABC) across radio and television, at the local and national levels. I’ve spent time as a news reporter and presenter, been a regional news editor, worked as a TV documentary reporter and as a national political correspondent. And, while the ABC now has an award winning online presence and a history of bi-media reporting, when I left for academia in 2003, traditional reporting outlets (i.e. radio and TV news programs) were still indisputably king, the online division operated remotely and separately from news and current affairs, and the digital revolution wasn’t driving output as it is now.

So, like many journalism educators, I’ve found myself trying to navigate the revolution from the outside. The bulk of my “new media” knowledge has been learned through osmosis. I began my journalistic career as a radio reporter, so I’m used to being self-reliant and technology-dependent. I trained in the early ’90s on digital audio and video editing programs and I’m more tech-savvy than your average journalism academic (and your average journalist, for that matter!) but I remain a self-described technophobe. I have to be pushed to adopt new technology and my IT skills are…well, let’s just say thank goodness for the help desk!

I teach traditional, production-based TV and radio journalism courses at the undergraduate level but as a practitioner and teacher I thrive on interaction with my audience, students and fellow professionals. So, as technology has developed to allow for much simpler production of multimedia journalism (e.g. Soundslides ) and delivered ready-made publication platforms like Blogger, my trepidation has dissipated and my interest in experimentation has increased.

I first dipped a toe into new media by starting a blog in mid-2007 after overcoming my own wariness. I see social media as the key to bridging the gap between the digital natives in our classrooms and those of us with more knowledge than skill in the digital media arena. Web 2.0 is a natural playground for “technically challenged” journalists and journalism educators seeking to cross the bridge into the digital media era and meet their young audience members and students in their own habitat.

In addition to blogging (less often than I’d like) about politics, social justice issues, journalism, teaching, the highlights and lowlights of my life, I Tweet, I Facebook and I fiddle with myriad other social media tools as a means of connecting globally with friends, students, professionals and strangers of like-mind — along with those who challenge my views in an invigorating way.

My students got me hooked on Facebook mid-2007, which I now use to interact with graduates and connect them to the professional journalists in my circle. I also use the facetious Facebook “Appreciation Society” set up in my name by these same students as a place to link alumni and interact with current students.

Twelve months ago, I attempted to establish a dedicated Facebook alumni page as well as a page for my third year bi-media course, but I ran up against institutional concerns about privacy. Late last year, the Supreme Court of the Australian Capital Territory, which sits just up the road from our campus, became the first jurisdiction to issue a summons via Facebook, so now I’m hoping that the wildly popular social networking site will be considered “safe” and establishment enough to use in my classroom.

My blogging practice took a back seat to traditional academic research last year but it remained a useful tool for engaging students. Many students actively interacted with my blog by posting comments and responding to links on Facebook and several told me they were inspired by my blog to start their own.

Video on the NowUC site

But my blogging habits weren’t viewed favorably by all in Australian journalism education circles, where the “blogging isn’t journalism” mantra can still be heard. One lecturer told me “journalism academics shouldn’t blog — it sets a bad example for students.” This year, however, I intend to embed blogging in my curricula — firstly as a platform for students’ critical reflection of their own journalism practice — as a companion for their main publication platform NowUC. This website, which was quite innovative in Australian University terms when it was established as a multiple-media publication for student journalism in 2003, is about to undergo an overdue overhaul. I’ll also be encouraging the students to each develop their own independent blogs as a way to help them find their own voices and experiment more broadly with journalistic genres.

I’ve already begun using Twitter in my teaching, successfully experimenting with it as a live-blogging platform for my graduating radio students as they covered the regional Canberra election in October 2008. They were dispatched with mobile phones around the “tally room” on election night, mingling with national media, voters and candidates and had a “total blast,” as one student put it, Tweeting on the vote count, the atmosphere, and getting live reaction from actors in the drama. (I’ll assess this experiment in my next post.)

As part of my experimentation, I’ve tentatively set up a skeleton YouTube channel and an online radio station at BlogTalkRadio for our broadcast students to begin cross-promoting their stories via social media. I also plan to investigate the use of other tools like Utterli in my teaching this year.

J-Schools no refuge from digital revolution

But while I’m excited about these developments as a teacher and a journalist, change needs to happen via baby steps within my institution, as it does within many universities. It comes as no shock that former colleagues still entrenched in traditional newsrooms are seeking refuge in academia in an effort to avoid the freight train of change that is digital media.

“How do I become a professor?” I’m often asked by journalists. Their reasoning is that universities are safe spaces for journalists, where time stands still on technology. They imagine journalism schools to be lofty places where they can continue their careers as public intellectuals while avoiding the pace of change — debating ideas in the abstract without worrying about the intrusion of the ‘real world’. But this reasoning is flawed. As much as I’d love more time to research, contemplate issues and contest ideas as an academic, the realities of 21st century higher education in Australia mean that a massive teaching and administration overload squeezes out room for research and significantly inhibits opportunities for professional practice, leaving even less time to keep up with industry change.

But students pursuing journalism degrees demand to be taught the professional skills that will get them hired. And while they may enroll in traditional journalism courses which are still often segregated into “print” and “broadcast,” the industry demands that they emerge with a set of generic skills suitable for a digital newsroom — such as an ability to incorporate audio and visual elements into multimedia productions — in addition to specialist skills in one or two traditional areas and an understanding of the changing nature of the industry.

This reality means it’s incumbent upon all journalism academics to now engage intellectually with these changes and develop skills in digital media practice — it’s no longer exclusively multimedia/digital journalism/new media academics who must undertake this work.

In other academic fields, it’s cutting-edge research that drives industry change, not the other way around. In a perfect world, journalism educators would not lag behind industry, but rather would be setting the pace for educational change in response to digital transformations. This would require keeping abreast of the dramatic changes affecting industry and enhancing traditional journalism courses through the integration of platforms, which are both easy to use and increasingly driving the news consumption habits of our students.

As a time-poor journalism academic trying to undertake a PhD, pursue traditional academic research, teach labor-intensive production-based broadcast journalism units, stay connected with the profession, keep up a modicum of professional practice and act as career counselor/job-placement agent for my students, social media platforms are both the easiest way for me to keep pace with industry change and the best tools for digitally enhancing the teaching of traditional journalism classes.

5 responses to “Experimentation (Not Stagnation) Should Flourish at J-Schools”