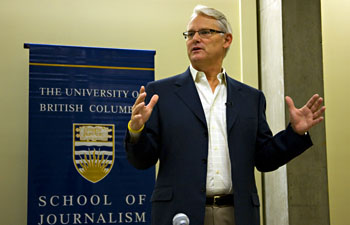 Here’s a recipe for how to cover local elections. Take a bunch of bright and eager journalism students. Give them two weeks to fan out across the city and come back with multiplatform stories on issues as diverse as creating bike-only roads, spending almost $30 million on a dog pound and treating Vancouver’s sewage.

This is what the first-year students at the Graduate School of Journalism at the University of British Columbia did for their final big assignment of the semester. The stories were published a few days ahead of Vancouver’s local elections on November 15 on our student publication, TheThunderbird.ca.

Election news is one of the main staples of journalism, so having a vote on our own doorstep provided a great learning opportunity for the class. For this assignment, the students each had to find, research, report and produce a news story.

But they also have to come up with a sidebar that would complement their main piece, and consider what format this should take. This reflects our multiplatform approach in training graduate students to work across different media while at the same time maintaining quality content. We all know what a challenge that can be, even in the newsroom.

Many of the students are comfortable with technology and eager to experiment. But this is not just about adding video or audio to a story because you can. Students are taught to consider how using multimedia can enhance their journalism, making critical decisions about why one form of media works better than another to tell a particular story.

When student Alexis Stoymenoff wrote about the mayoral candidates singing at an event, she also posted short clips of the performances. The videos enhanced the written piece by allowing readers to see what the story was all about.

Another, Brandi Cowen, looked at how students new to the city were excluded from the local poll, producing a map showing different voting rules across Canada. This provided an easy and intuitive way to examine what could have been a rather dry written piece.

Despite all the new ways to inform readers about civic issues, some basics remain. Students can’t forget that, no matter what tools you use to tell a story, the most important thing is to do the legwork to make sure that the underlying story is accurate. The students still had to research the local political scene, a task especially daunting given that many of them are from outside Vancouver and have only been living in the city for a few months.

Getting a grounding in local politics was key to this assignment, as this West Coast city has its own peculiarities. National parties aren’t represented on a local level. Instead there are Vancouver-only parties. And local councilors are not elected according to city district. Rather, the ten candidates with the most votes overall are elected.

Therefore it was important to have faculty on hand who could help guide the students. Fortunately, our Canwest Visiting Professor for this semester is Vancouver Sun columnist Miro Cernetig. As a regular commentator on city politics, he brought considerable knowledge and connections to the classroom.

He was instrumental in persuading the premier of British Columbia, Gordon Campbell, to talk to the students about the political issues in the province.

Still, it proved hard for students to gain, in just a few weeks, the sort of understanding of local politics that a city reporter develops over years. Our advice was simple: Keep asking questions. Sometimes the hardest part of being a journalist is admitting that they don’t know something, or don’t quite understand it.

As budding reporters, it is understandable that a student might be concerned about appearing ignorant. But there is nothing wrong in pressing for a clearer explanation and asking for more details. Curiosity and perseverance pay off in the end.

In the end, the students learned that not every story needed a multiplatform approach. Learning how to use multimedia to successfully tell a story sometimes involves learning when not to use multimedia. It’s not about adding audio or video just because you can.

One challenge the students faced was working on stories that were not going to be published for a couple of weeks. Many started their newsgathering by attending debates between candidates or election-related events in communities. But the spot news generated by these events would be woefully out of date by our publication deadline. Instead, we urged the students to look at the issues that can come out of these events, and find the stories that brought the topic to life in a topical and relevant fashion.

Sewage was an electoral issue that was not widely covered

Our aim was for the students to produce local stories on issues that were largely absent from the day-to-day coverage of the campaign in the mainstream media.

As a result, we ended up with a wealth of content. For example, at one of the mayoral debates, neither candidate was willing to commit funds to the Outgames due to be held in Vancouver in 2011, at a time when the city was spending millions on the 2010 Winter Olympics.

Student Magally Zelaya used that as the starting point to look at the reaction from Vancouver’s gay community, which prides itself on its economic and cultural significance to the city. For this story, we decided that the most effective way to enhance the main story was a Q&A on the Outgames, rather than try to use multimedia just for the sake of it.

Another, Brent Wittmeier, reported on the debate over building homes in church parking lots and also chose text for the sidebar. Even in a multimedia medium like the web, sometimes plain old text may be the best way to enhance a story.

For the students, the local elections offered an opportunity to take their skills out of the classroom and apply them in a professional setting. It gave them a grounding in the politics of the city and a way to showcase their multiplatform journalism. But it was also about making decisions about using multimedia and thinking critically about how best to tell the story.