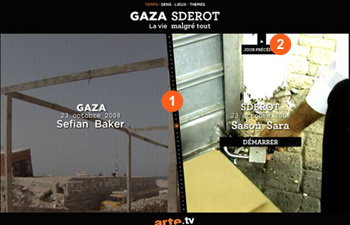 One sense of fear, two armies, and three rows of electrical fences separate Israel and the Gaza Strip. For the past 10 years, it has been difficult for residents of these two places to ever imagine meeting one another in person. Now, thanks to a new documentary project produced by French/German television station Arte TV and a handful of Israeli and Palestinian production teams, residents of the besieged Israeli city of Sderot and the besieged Gaza Strip are able to see something they haven’t seen in a decade: each other.

The collaborative effort is a web series called, Gaza Sderot: Life in Spite of Everything.

We all know that there is an electricity crisis in Gaza, but what does it really mean for the people living there? Our news never shows us that." -- Israeli producer Osnat Trabelsi

French executive producer Serge Gordey, who has produced documentaries from both Israel and the Palestinian territories, told me in a telephone interview that the series is not just for Israelis and Palestinians, but for anyone in the world with access to the Internet who wants to better understand the region. Gordey believes that the media’s obsession with carnage in the Middle East has spawned a global thirst for another type of coverage.

“France is not the only country in the world with a fetish for stories with unhappy endings when it comes to the Middle East,” he said. “Our assumption is that this particular fetish can be broken.”

So Gordey flew down to the Middle East, hired some local production crews, and instructed them to make films that feel more like “slices of life.” Each day for two months, the crews produce brief two-minute glimpses into two people’s lives, one from Gaza and the other from Sderot. They upload the material to a server in France with either Hebrew or Arabic language subtitles. The piece is downloaded and translated into English, German, French, Arabic, and Hebrew.

It is then broadcast on the web using an ingenuous split screen interface, that allows you to easily bounce back and forth between Gaza and Sderot without worrying about electrical fences. Plus, you can click on the timeline that runs between the split-screen to look through the archives by date. There’s even a great annotated map that shows where each video is shot using satellite images.

The result is a project that is changing perceptions of these two places. According to Gordey, the site is getting an average of 10,000 hits per day with people spending an average of eight minutes on the site, or watching about four webisodes. The videos are mostly shot in cinema verite, which provide a voyeuristic, front row seat into someone else’s everyday life.

The November 26 episode follows wedding singer Khalaf Qassim to a jubilant musical performance, powered by a diesel generator due to Gaza’s electricity crisis. Producer Osnat Trabelsi speaks for all Israelis when she asks rhetorically, “We all know that there is an electricity crisis in Gaza, but what does it really mean for the people living there? Our news never shows us that.”

On December 8, we see Gaza resident Madeha Abu Nada sitting in the dark with a blazing fireplace providing heat and light, complaining that she is living 50 years in the past. A gentle scroll of the mouse takes you to the well lit beauty parlor of Yafa Malka, a longtime Sderot resident, who is complaining that so much of the younger generation has left Sderot due to the Qassam rockets as she gently applies mascara to a woman’s eyelashes.

The characters also include a fisherman, a strawberry farmer, a doctor, a grocery store owner running for mayor, a young immigrant boxer, a musician, an aspiring filmmaker, and a housewife with 10 children. Each one is profiled every few days when something happens in their lives — or even when nothing happens at all.

We are in Sason Sara’s living room at the pivotal moment when he learns that he lost the race for Sderot mayor and needs a hug from his wife. We join Heba Safi and her three girlfriends at a quiet moment, as they just sit around talking about weddings in Gaza. Yet, even when nothing really exciting happens, you want to watch.

“The most difficult part of this process, like in any film, is finding the story,” says Israeli producer Arik Bernstein, one of the visionaries behind the project. He added, “Whether a film is 90 minutes or two minutes, you need a narrative that will keep the audience’s attention.” While some narratives are certainly stronger than others, the goal, according to Bernstein, “is for the audience to identify and build an emotional bond with these characters across several episodes.”

Before we see Heba Safi with her friends, we already know from previous episodes that she is a relatively affluent, amateur film director who has joined the Young Journalists Club in Gaza, has had her tonsils out, and is worried that her career choice is too bold for a female in a religiously conservative society.

Gazan producer Yousef Atwa, who works for Ramatan news agency, prefers this production to his day job. “It is less risky and more rewarding,” he told me. The two-man production crews are equipped with discreet prosumer cameras, which provide a cheap and simple format suitable for web delivery.

Atwa initially had difficulty getting access to the subjects living in a restrictive media environment under Hamas.

“They were initially concerned about opening up their homes and personal lives to us, but we reassured them by telling them that we will not be political.” There was also the issue that Muslim women are generally reluctant to appear on film — an obstacle he managed to overcome by choosing less religious characters.

Atwa is not only a producer, but also a keen watcher, who is learning a lot about life in Israel from the series. He said he didn’t realize that so many people in Sderot were of Moroccan origins. He also didn’t realize the similarities with people in Gaza.

“We are both victims of this terrible situation. Both our governments don’t really listen to us.” He then added, “but the main difference is that our suffering in Gaza is much worse than in Sderot.”

Osnat Trabelsi, his Israeli counterpart, has in turn been learning about life on the Palestinian side. A few years ago she made a feature documentary about Madeha, the Gazan strawberry farmer. But since then a lot has changed, and Israelis are no longer allowed to enter Gaza.

“This is my only way of connecting to Madeha, and seeing that she is okay,” Trabelsi said. “Through these Internet videos, I am taken into this virtual world that would otherwise be forbidden to me because I am Israeli.”

There is another side effect to this project worth mentioning. It not only blurs borders between Israelis and Palestinians, but amongst them. A significant share of the site’s daily hits comes from the West Bank and Israel (outside of Sderot). West Bank Palestinians are, of course, forbidden from entering Gaza without special permission. Most Israelis, especially the Tel Aviv crowd, see Sderot as a backwater, frontier town to be avoided at all costs. While website visits won’t contribute to the local tourism industries, they may bolster a sense of national unity among Israelis and Palestinians.

“Life in Spite of Everything” reminds me of two sparring neighbors who are invited into each others’ homes for the first time and are each shocked to learn just how normal the other is. But for the general public accustomed to gory images and loud explosions from these places, I offer a caveat: What you see may bore you. It may also leave you feeling inspired. In spite of everything, there is a beautiful and fragile humanity that continues to thrive in this godforsaken land.

Jaron Gilinsky is a journalist and documentary filmmaker based in Jerusalem. As a freelance video correspondent for Current TV, CNN World Report, and the New York Times, he has produced and directed scores of documentaries on a range of international topics. Jaron is the founder of Falafel TV, a documentary production company, and regularly posts his videos and articles on his personal blog.