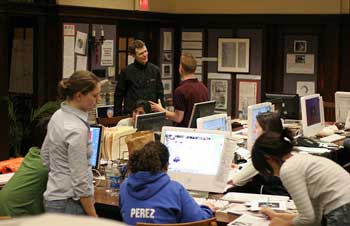 With the swift pace of change in the media landscape, it’s easy to overlook how far college news media has come in a short time. There has been some great innovation in college media, even as some lag behind.

I was prompted to reflect on this last month, after reading Going Digital, an Inside Higher Ed article by Brian Farkas, editor of the Vassar Miscellany News.

Even now, I find community college newspapers that still have no web presence." -- Bryan Murley

With our new Web site, http://miscellanynews.com/, we have now entered into the next generation of online journalism. And, for better or worse, we have become one of the few colleges in the country to do so. On our new site, reporters can contribute live blogs, attach videos and other multimedia to their articles, and display high-resolution photography in a way that our print publication never could. Best of all, The Miscellany’s site is flexible, no longer burdened with the stagnant design so common among news sites in the 1990s. We have become one of only a handful of college newspapers in the country, along with The Yale Daily News and The Swarthmore Phoenix, to adopt a Web 2.0 approach and craft our site using up-to-date CSS and XML standards.

Farkas’ description is overly pessimistic. Despite his negative outlook, college newspapers across the country are still moving forward with online content. Their innovations have been visible over the past few years — especially when you consider how difficult it is for them to change.

When I first began blogging about online college media three years ago, most websites were little more than shovelware, with print editors and some advisers reluctant to invest time and energy in developing a robust web presence.

Some of that resistance was based in tradition: It’s hard to steer a 100-year-old institution in a new direction. Production workflows had developed and been set like clockwork. Each new generation of editors and reporters walked in the footsteps of the previous generation, and learned their ways. The website was appended to the end of the workflow, after pages were sent to the press. Blowing up that workflow is not easy.

Still more resistance was cultural. Print journalists saw themselves as newspaper journalists first. The battles over whether blogging could be journalism were still being fought. Copy editor Greg Finley of the Orion at California State-Chico argued in 2006 that newspapers should keep their content offline, saying “No other medium can match newspapers’ depth.”

And another hurdle was technological: Inexpensive, easy-to-use tools for online storytelling were just coming into widespread use, and broadband Internet access was not nearly as widespread as it is today.

That resistance has faded over time, especially as the news industry has struggled to reinvent itself.

But that doesn’t mean it’s been easy. Even now, I find community college newspapers that still have no web presence. Bob Bergland, a professor at Missouri Western State University, found that 36% of a random sample of college newspapers had no web presence at all. (Bergland’s findings are not yet available online, but I’ll update this post as soon as they are available.)

Large daily university papers struggle to make money from their websites, and campus readership of the printed product remains high compared to industry standards, which leads to a conundrum: whether to devote resources to a website when the print product is still so popular.

And online efforts ebb and flow with staff changes as student journalists graduate and new ones take their place. One year, a paper hires a whiz-bang web designer who beefs up their online offerings. The next year, that designer is gone, and a less-savvy replacement can’t keep up the pace. One year’s multimedia journalist gives way to the next year’s more traditional print journalist.

Despite all these obstacles, many college newspapers have moved forward with innovative online offerings. Here are a few examples of sites that have paved the way in blogging, video, audio slideshows, and other forms of interactivity:

Vanderbilt University InsideVandy — Chris Carroll, Vanderbilt student media adviser and co-founder of the Center for Innovation in College Media, led InsideVandy student journalists in an effort to create a “mothership” approach to student media, akin to Steve Yelvington’s BlufftonToday in 2006. The idea was to bring all student media — TV, radio, newspaper, and magazines — into one online presence that would allow anyone in the community to contribute content.

Virginia Tech Collegiate Times — The Collegiate Times became an example of both breaking news and multimedia usage in the aftermath of the April 16, 2007, massacre on campus. Student journalists posted breaking news updates, a blog, audio slideshows and video (see the CT archives here). More than that, other school newspapers also used online media to report on the shootings, posting video reports from their campuses and posting blog updates from Virginia (see continuing ICM coverage here).

University of Washington Daily — Just days before the VT shootings, UW’s student journalists covered the death of a student on campus, using video and live updates to tell the story (archived story here). The Daily began shooting video news on campus in the 2006-07 school year.

San Jose State University Spartan Daily — With Ryan Sholin as web editor, the Spartan Daily plunged into multimedia early. See this example, a 2006 story about SJSU boxing club members traveling to Berkeley to compete in a regional boxing tournament. In addition to text, the article features video and audio slideshows. The paper has continued to push the envelope, in March 2008 experimenting with live streaming TV and live blogging.

Boise State University Arbiter — The Arbiter dove headfirst into web-first publishing when the Broncos went to the Fiesta Bowl in 2006. Since the Arbiter wasn’t publishing during the Christmas break, they made the most of their online presence. Staffers from the student newspaper published web-only content from Arizona, including podcasts, video and audio slideshows (see their coverage here). They have continued to produce podcasts and other multimedia coverage since then.

Eastern Illinois University Daily Eastern News — Long before I was hired at Eastern, the DEN was producing audio slideshows using Soundslides that rivaled the best in the business. Check out this audio slideshow from the 2006 Greek Week Tugs competition. They were also early to experiment with podcasts and, in 2006, revamped their sports coverage by introducing a widget that could automatically update football scores and schedule information for readers.

This is just a small sampling of the ways that students have taken advantage of online tools since late 2005. There are numerous other schools that have also moved into multimedia and online publishing with gusto, including the Daily Tar Heel at UNC-Chapel Hill, the Daily Collegian at Penn State, the Daily Pennsylvanian at Penn, the GW Hatchet at George Washington U., the Miami Hurricane, the Independent Florida Alligator at the University of Florida, the Corsair at Pensacola Junior College, the Gargoyle at Flagler College, the Daily Mississippian at Ole Miss, and numerous others. For more examples of student journalists’ multimedia, see this database.

Recently, we saw clear evidence of this movement into online journalism on Tuesday, Nov. 4, 2008, when student journalists across the country used tools like Mogulus, Twitter and CoverItLive to cover the historic election night. (For a sampling of coverage, see here).

To borrow a phrase, “You’ve come a long way, baby.”

23 responses to “College Media Has Come A Long Way Online”