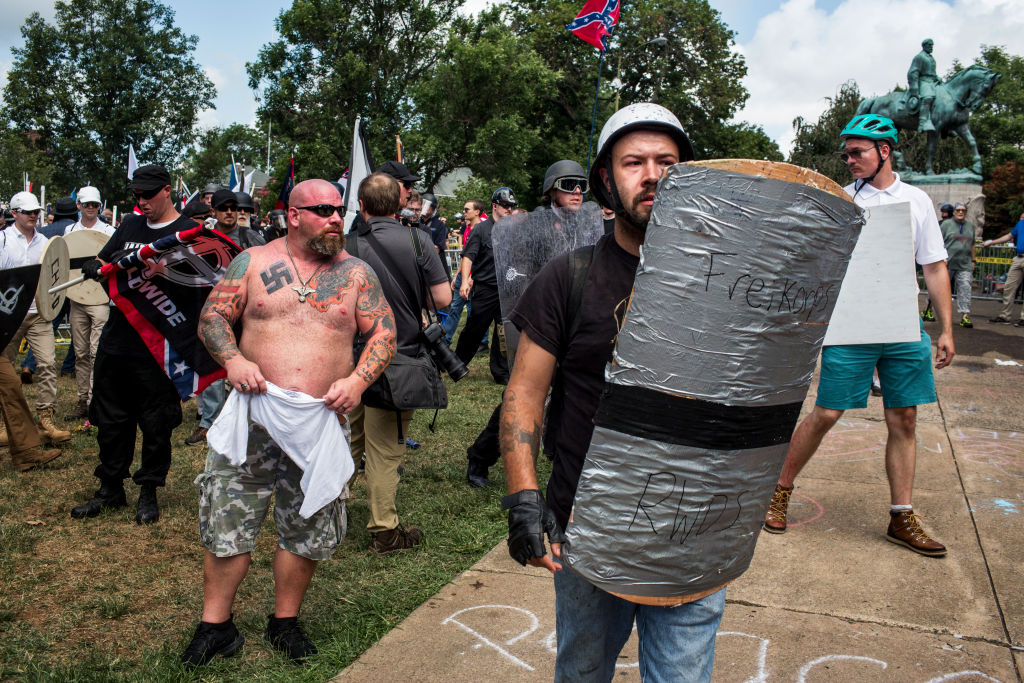 White nationalists at the Unite the Right Rally on August 12, 2017 in Charlottesville, Va. (Photo by Jason Andrew/Getty Images)

Michael Edison Hayden was one of the first foreign journalists on the ground after the Nepalese earthquake in 2015. The “ground was still shaking” when he arrived, he said. He’s reported from the disputed territory between India and Pakistan in Kashmir, and gone door-to-door in Phoenix, searching for a mass killer. But, Hayden said, reporting on the far-right white identity movement in the U.S. has been his most traumatic professional experience.

"There's a tremendous amount of guilt. By reporting on this, am I going to get someone in my family killed?" -Michael Edison Hayden

The Newsweek reporter said he has become accustomed to anonymous threats – both veiled and explicit – and has weathered a deluge of menacing messages about his family, including an incident in which his parents’ home address was circulated on far-right chat rooms. Late last year, he saw an anonymous post in an online forum urging someone to throw a molotov cocktail through his parents’ window.

Conversations CPJ had with over a dozen editors, reporters and journalism security experts show that Hayden’s experience is not an outlier. The work takes a concerted emotional toll, and is replete with digital and at times, physical, threats – threats that are especially challenging for freelancers and newsrooms with young or green staff, and without dedicated security and digital experts.

White supremacist movements have always been a force in American political life. But when a number of media-savvy, well-organized leaders of these groups explicitly embraced Donald Trump during the 2016 election, newsrooms began assigning more reporters to the story. The beat took on an added urgency last year, after a man taking part in a protest over the removal of a Confederate statue in Charlottesville, Virginia, drove his car through a crowd of counter protesters, killing a young woman.

“It’s become more necessary to have reporters trained to be able to cover this movement,” Samhita Mukhopadhyay, who has written extensively about online harassment, told CPJ. Mukhopadhyay, the executive editor at Teen Vogue, said she is wary of the impact the beat has on reporters. “I’m always asking, who would be the best person to do something like that with the least amount of hard damage? Who has the experience to do something like that and come out unscathed?” she said. “It’s shocking the rate at which people covering this beat aren’t protecting themselves.”

Mukhopadhyay said she sees parallels between the treatment of reporters covering white nationalism and the broader experience of harassment that female writers face. Covering these activists brings a further risk, since reporters often must make direct contact with members of those movements.

A journalist at a major publication, who requested that their name be withheld, told CPJ that the leader of a white supremacist group they were profiling said he had obtained the address of the journalist’s parents. The journalist told CPJ they believe the leader was suggesting that he could turn “the scrutiny of him into scrutiny of me.” The journalist did not receive any reprisal for the reporting but said the threat remains a source of fear.

Coping with Threats, Fear and Guilt

Hayden had a similar experience when reporting on a prominent neo-Nazi figure, Andrew Auernheimer. After Newsweek published the article, followers of Auernheimer encouraged one another on social media to contact Hayden’s elderly parents, the reporter said. He then began to receive online threats that referred to his parents by name.

The journalist said he reported the threats to law enforcement, which took some measures to protect his family, but the incident affected him. “There’s a tremendous amount of guilt,” Hayden said. “By reporting on this, am I going to get someone in my family killed?”

Many legacy and large digital newsrooms have security staff to help prepare reporters but the pressures of digital journalism – compulsively sharing online and directly engaging with critics and readers – and a proliferation of freelancers can be at odds with what some security experts say are best practices.

“A lot of young reporters haven’t thought about this until we sat them down,” Jason Reich, the global head of security at BuzzFeed, told CPJ. He said he advises reporters to draw a clear line between their personal and professional online presence. Personal information – Instagram posts from a favorite brunch place, family photos, or pictures of partners – should be kept private.

Amid a deluge of intimidating emails, direct messages and calls, a security team can also help a reporter distinguish between threats that are disturbing but unlikely to cross into physical harm, and those that appear to be more worrying.

Newsrooms should expect to be in touch with law enforcement and prepare accordingly, Reich said, adding, “How many editors know which precinct their offices sit in? I would suggest that newsrooms maintain a relationship with federal and local law enforcement – prepare before your reporters get threatened.”

‘A Unique Kind of Trauma’

A reporter covering the far-right beat can receive dozens – often hundreds – of emails, messages, and at times phone calls after publishing a story that rankles activists online. This can be especially brutal for women and minority writers. Hayden, who is of Arab descent, said he is often called the N-word.

Talia Lavin, who is Jewish, told CPJ that after she wrote a piece for The New Yorker about a neo-Nazi website struggling to find a domain to host it, her address was posted online and she began to receive messages from people fantasizing about hurting her. “They don’t see me as an equal, besides calling me a kike whore, they don’t need to be addressing me as a person,” said Lavin.

Accustomed to such harassment online, Lavin said she didn’t alert her editors, and instead tried to move on. But, she says, newsroom leaders should be aware of what the beat could entail. “They should be sensitive to the psychological impact of these stories,” she told CPJ. “It’s a unique kind of trauma.”

Several of the reporters with whom CPJ spoke said it is difficult to navigate the overlapping digital and physical worlds of these movements and the associated risks. Part of this includes being able to determine when threatening language is deployed with a degree of irony, and when it could be serious.

Some reporters feel as if the threats could leap off the internet at any moment. Jared Holt, a reporter for the progressive website Right Wing Watch, told CPJ that after writing a piece about the how white supremacists, or members of the so-called alt-right, infiltrated YouTube, he got the impression he was being followed outside his workplace. The address was previously circulated among anonymous accounts on Twitter in response to his other articles. But, after his YouTube piece, the online threats ratcheted up. Holt said he started to vary his route home after getting the impression that a man was following him. “Fortunately, these people are a lot nastier on the internet, than they are in real life,” he said.

Part of the problem, reporters told CPJ, is that while many in the far right see the media as a necessary megaphone, a story or reporter’s style can incite a mob on Twitter or the right-wing site Gab, a chat network similar to Twitter. “They are very attuned to how much hurt they can cause,” Jack Smith IV, who primarily covers white nationalism for Mic, told CPJ, adding, “There is nothing like the most sophisticated online hate operation the world has ever seen deciding like you are public enemy number one.”

This was the case with Andy Downing from the Columbus Alive, a local paper with a circulation of 35,000. When he and his colleague Joel Oliphint wrote a profile last year of Andrew Anglin, the owner of the neo-Nazi website Daily Stormer who grew up in a Columbus suburb, Anglin posted photos of the reporters and their families, including children, on his site, alongside images of their homes and vehicles. The two received more than a hundred emailed threats, in addition to physical mail, Downing said. Downing added that he told the local police, who started to keep a closer eye on the journalists’ homes.

“I didn’t sleep well, every sound you hear at night, you’re up like a shot,” Downing said.

Before publishing, Downing said he took steps to protect his privacy: he added two-step verification to his devices and set his social media to private. But, Downing said, he didn’t think to tell his family to do the same, and images from those accounts were eventually circulated, alongside property records that can be obtained via public records searches or by paying one of the many online data-brokers that sell such information.

Downing said he would still approach the published Anglin piece the same way but added that he’d think twice before writing a follow-up. “It is an effective deterrent,” he told CPJ. Reich, the security expert at BuzzFeed, said such reactions are understandable, adding, “I’ve seen reporters paralyzed with self-censorship.”

The Risk at Rallies

Journalists covering the movement’s rallies, which sometimes lead to clashes between white nationalists and anti-fascist (antifa) activists, face further risks. The Press Freedom Tracker (a project of which CPJ is a partner) has documented an assault by an antifa activist on a reporter attempting to take photos at a rally in Berkeley in August year. And reporters who have covered the rallies say the white nationalists sometimes use threatening or intimidating behavior. Luke O’Brien, who covers white nationalism for HuffPost, told CPJ, “Editors in Washington, D.C. and New York, they struggle I think to apprehend the degree of instability there is in these situations.”

At a “White Lives Matter” event in Tennessee in the fall of 2017, O’Brien says a mostly uneventful rally quickly became dangerous. After he left the protest in a rental car with some antifa activists, a black GMC began following his car aggressively, swerving across double-yellow lines to stay on his tail, O’Brien said. At one point, one of O’Brien’s passengers pulled out a gun. The reporter, who published an account of the incident, said he was eventually able to lose the tail, but the moment helped him clarify the very real risks of his job.

Despite the dangers, editors and reporters told CPJ that there is increased pressure from newsroom leaders to cover white nationalism, in part, because readers find stories about extremists tantalizing, reporting can be done quickly online, and the coverage generates a lot of clicks. But Mukhopadhyay, the editor at Teen Vogue, says that outlets should resist the impulse to view far-right movements as a revenue strategy. “It downplays the importance of this historic moment, to say, that’s a really good click rate for us,” she told CPJ. “And I would like to think most newsrooms feel that way too.”

Avi Asher-Schapiro is CPJ’s U.S. correspondent. Avi is a former staffer at Vice News, International Business Times, and Tribune Media, and an independent investigative reporter who has published in outlets including The Atlantic, The Intercept, and the New York Times.