How J-School Professors, Students Can (and Should) Unplug 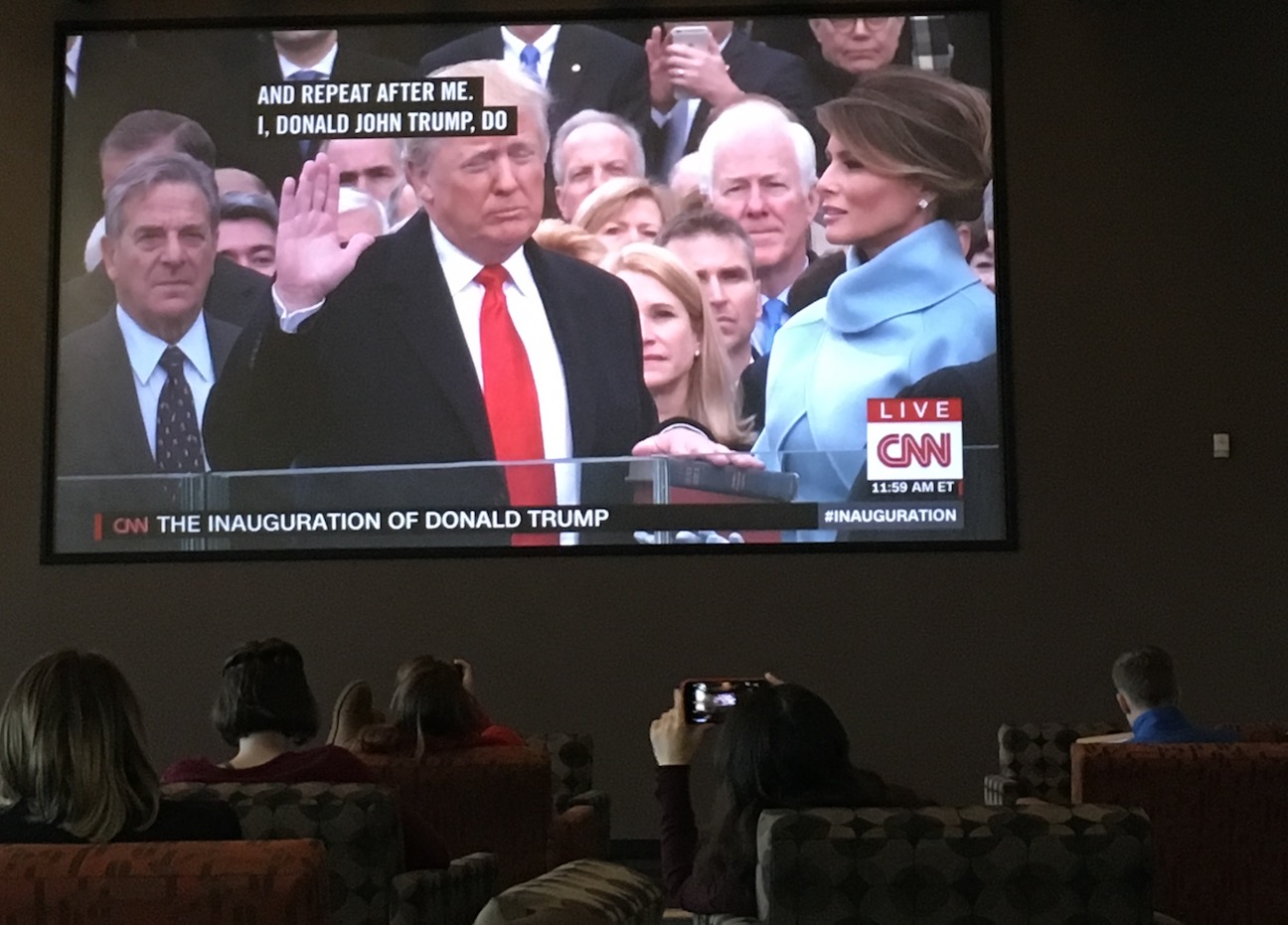 Journalism students watch President Trump's inauguration on the giant screen in what is known as the First Amendment Forum at the Cronkite School at Arizona State University. (Photo: Leslie-Jean Thornton)

The 2018 National Day of Unplugging is on March 9-10 from sundown to sundown.

When I began teaching full time, shortly before 9/11, I brought news into the classroom by any means possible. Pre-iPhone, Facebook, Twitter, Instagram and well-developed online news, I cadged AP news budgets from newsroom friends, toted the latest newspapers and wheeled in TV carts.

For the past year or so, I’ve often looked for ways to keep news out.

These days, news is ubiquitous, like ambient noise. It arrives in streams of constant, unsettling, confusing, contradictory information propelled by events that can defy immediate sense. What to make of a president who denigrates journalism by calling it fake, then – by The Washington Post’s count – averages about six false or misleading statements a day since taking office? Can we bear to hear of one more school shooting or other act of violence? When do we say enough and tune out, even for just a while?

There’s a catch: how can we unplug when it’s our job as teachers, researchers and students to listen, see and know? Even if we must, breaking away may be extra hard because we’re probably also…addicted. To social media, to news, to feeling connected to family, friends and the world.

Struggling to Take a News Blackout

That’s something Steve Fox, of University of Massachusetts Amherst, brings home to his mostly-freshman News Literacy students in their first assignment. They’re challenged to a 48-hour news blackout: no tweets, no texts or Facebook posts, no television, no talking to friends, nothin’. “Some of them barely make it out of class,” Fox said, because he freely admits it’s a nearly impossible assignment. “They try,” he said, but they soon become aware news comes from nearly everywhere. “I couldn’t talk to my suitemates,” they report, “had to stop my Dad from telling me the latest; couldn’t walk into the cafeteria, etc.”

News immersion takes a toll, sometimes in surprising ways. I know. After days deep in Instagram feeds studying reaction to the Sutherland Springs – or was it Las Vegas? – shooting, the ping ping ping of a street crossing “wait” signal sounded for all the world like the pew pew pew of a gun. It was all I could do to not yell “Duck! Run!” and do so myself.

At Arizona State University, where Kirstin Pellizzaro works with Cronkite News students producing statewide broadcasts, two students made the same sort of noise-fear connection. They were at school on Super Bowl weekend when they heard bangs. “They immediately went into shooter situation mode,” Pellizzaro said: turned off lights, hid under tables, called the police. Luckily, the banging was for a party setup, not disaster, but it led Pellizzaro to change the day’s lecture. “I wanted them to feel like their reaction was completely normal,” she said, “so that day we talked about the stress of news and how the consumption of horrific situations day in and day out can affect you mentally. I shared how I was working when Sandy Hook happened. I was a mess that day. I spent hours crying as I tried to put a broadcast together. Then we talked about how to decompress after a hard news day.”

Sometimes, she and others have said, students feel better knowing it’s not just them, that “someone in the business for years still cracks every once in a while.” Jacqueline Petchel, executive editor of Carnegie-Knight News21 based at Cronkite, said covering difficult stories brings a whole new level of immersion. “When that happens, I tell reporters to stay focused on the most crucial elements and essentially prioritize the list of things they need to do,” she said. “Why? Because without the ‘beating heart’ of a project, the rest of it won’t survive anyway.”

Amanda Crawford, who as a reporter covered politics and mass shootings, teaches at Western Kentucky University. “We had a school shooting in Kentucky in January. Many of my students are covering the shooting and the national gun debate in the wake of it,” she said. “I spent time in every class last week answering students’ questions about how to guard your own emotional well-being while covering these heavy topics.”

Taking care of the students’ own hearts sometimes means digging into news before backing away. Brian Rackham oversees NAZToday’s daily newscast at Northern Arizona University where he directs the Media Innovation Center and its immersion programs. “We did a piece on how NAU and the community college prepare for serial shootings,” he said. “The students felt like knowing how and why these shooters acted as they did makes them have a more realistic picture of the risks – that it is not very likely to happen here. Sort of a knowledge is power thing.”

Fear is a natural reaction to fearsome news; visualizing fear – putting people’s fright into images – is what Julie Elman, of Ohio University (and a former Virginian-Pilot colleague) does as a project. “I am oftentimes surprised at what comes out on paper,” she said. “What I have discovered recently, though, is that I’m getting really sad and tired of illustrating the aftermath of gun violence in the United States.” The same, she said, for terrorist acts worldwide. But for her, art is also a balance. “I find that I can move into a mental space that’s calmer.”

Stress accumulates, reinforced by all sorts of news, perhaps simply the flow. Colleagues and friends report getting jumpy, cranky, exhausted, unfocused, depressed and sad after some ineffable boundary is crossed. Some know to take breaks; some know, but can’t or don’t. “It’s hard when you need to know what’s going on,” admitted Rackham. His breaks aren’t often enough, he said. But breaks work, Fox said. “Sometimes all you need is a half-day/day. No real downsides since you can catch up to everything pretty quickly. Upsides? Well, mental health.”

Dawn Gilpin, who teaches social media at ASU, is “very big on escapism” and activity. “I’ve made a rule that when I go running or out for a walk, even walking from my parking spot to work, I can’t listen to current events podcasts. Getting out in the world and listening to music or a couple of people talking about Top Chef like it’s the World Series gives me a nice change of pace.” But she also researches social media about gun culture. “The last couple of weeks have been especially rough,” she said. “Seeing the same patterns repeat over and over. The same rhetoric from both sides….” She worries students will think everything online is suspect, fake, narcissistic, “because it’s conventional wisdom. I push back against it, but in a big online class it’s hard to know how much of an impact I’m making. But the trust deficit, I think that’s real. And not just among young people.”

Crawford noticed something similar when she co-taught The White House & The Press last semester. “That class was tough,” she said, “because students recognized the threat that Trump’s vitriolic rhetoric can have on the future of the free press in the United States and the anti-media climate that they will be facing as they enter the profession. It’s hard not to let that negativity seep in.”

Lily Ciric Hoffmann, an entrepreneur who teaches multimedia at the University of Maryland, fights the negativity by taking nature walks, listening to podcasts, reading books – anything to relax and feel better. “I take care of myself so I can take care of the rest,” she said. “Whatever is out there newswise will reach you no matter what.” Crawford, who needs to get away from news “for my own sanity sometimes,” gardens, writes, sings and tours with an indie Americana band.

Unplugging from News in a J-School Setting

The giant projection screen in the open-forum heart of the Cronkite School, where I work, caught my eye last week: CNN was reporting another shooting, another university shutdown. I was on my way back to class after a quick trip to the photocopier. I had my phone, so I checked Facebook. A former student, now a professor in her own right, had posted: I’m all right. I’m in a classroom, locked in with my students. We’re safe.

I thought immediately of Elman’s memorialization of the Parkland, Fla., shootings. She expressed so many fears that amplify every time more such deaths occur: who is next, who is safe, am I? So I paused. Normally, I would keep my classes informed of major news developments if they happened during class time. We are, after all, a journalism and mass communication school. This time, no. I wanted to buy them time. I wanted to keep them safe from the knowledge, the antsiness, the news, even if only for hours.

I went in cheery. Keep ‘em busy, they won’t check their screens. They call my multimedia classes “therapy” sessions these days. We’ll keep it real, I tell them, but we’re going to stay objective, focus on telling stories with technique and skill, and have fun while learning. It’s the type of class where you can talk while doing and students have spoken their peace about politics, sexual abuse, discrimination and, yes, shootings, in ways that were definitely therapeutic. But it needs to come from them, I’ve found, not like a rock falling from the sky via news.

Learning from the Relentless News Cycle

I’ve learned many things. Last year, one young woman in class said her friend’s headscarf had been yanked off with accompanying taunts on Nov. 9; she was told it was a new America now and she didn’t belong. The student said men catcalled her that day as she walked in her neighborhood. They yelled they wanted to grab her by the you-know-what. A Dreamer – we have many in Arizona – merely nodded that he felt affected by the election outcome, unable to speak but saying volumes with fearful, sad eyes. We needed to unplug. I took the class on a photo walk, and we plugged those images into a Tumblr.

The urge to protect by keeping news at bay, coupled with the occasional challenge of finding actual news in update swamps, can result in an ironic lack, according to Susan Keith, department chair of journalism and media studies at Rutgers University. “When you first started asking people about this, I thought it was odd,” she wrote. “I have, in many ways, the opposite from the problem you described. Rather than feeling overwhelmed by news, I find it hard to get enough.”

Maybe, she thought, it was just her, with a two-hour commute each way to campus and a child to collect from school. Because of their 11-year-old, she and her husband rarely turn on TV or radio news in the morning: too much to hear at that age. News gets read “in dribs and drabs” of connectivity in subway stations. Email, grading, teaching and sometimes sleep crowd out other news acquisitions. “I sometimes have days when I go all day reading only one-paragraph news alerts on my phone, with no time to read or listen deeply until 10 or 11 p.m., as if I were snacking rather than eating a full information meal.” Or, she said, I get my news from you.

Leslie-Jean Thornton, who hails from New York, is an associate professor at Arizona State University’s Walter Cronkite School of Journalism and Mass Communication. She’s been hooked on studying how information is shared since first stuffing a handwritten “newspaper” illegally into neighbors’ mailboxes at the age of 7. Her research focuses on journalism practice, visual communication and information ecosystems on social media.