How Broadcasters Are Making Two-Way Experiences with Interactive Content 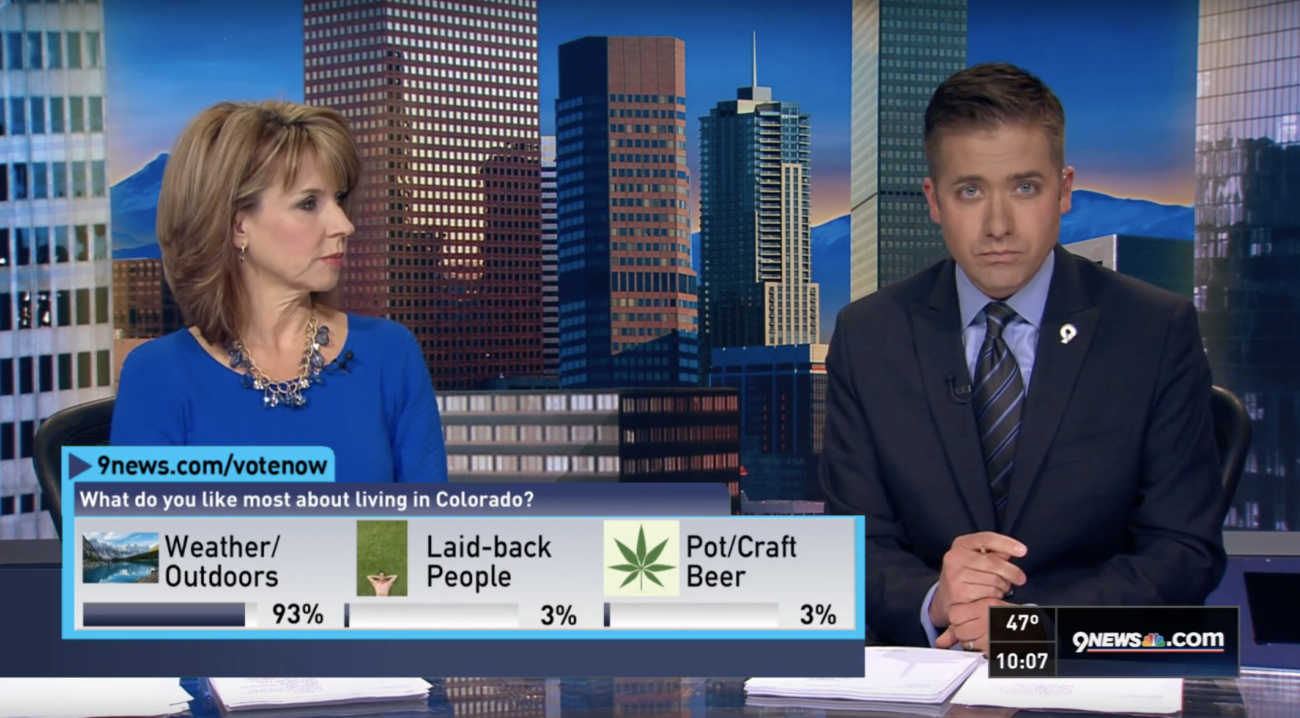 KUSA in Denver has been using Megaphone TV to allow viewers to vote in polls during their telecasts. (Photo courtesy of KUSA)

The following is a sponsored post from NAB Pilot to promote its Innovation Stories section. Read more about how broadcasters are innovating here.

For decades, “broadcast” was a one-way medium. With the adoption of social media and mobile technologies, however, that’s all changed. Making local news a participatory and relevant experience for viewers and listeners is now top of mind for local TV and radio stations across the country.

Many broadcasters are bringing in the audience into the equation – whether it’s giving them a say in the content, through polls, live Q-and-A or picking the next musical superstar, the audience is now part of the content strategy.

Newsrooms continue to experiment with Facebook Live, two years into its launch. Because Facebook puts an emphasis on inserting Facebook Live broadcasts into consumers’ news feeds while the broadcast is actually live, it’s a smart way for newsrooms to utilize the platform for breaking news content.

Meteorologists, in particular, have flocked to Facebook Live as a way to deliver breaking weather information.

“Before Facebook Live, our goal would be to post a still image or possibly a radar animation of the storm and the warning,” said Chikage Windler, the chief meteorologist at KEYE, a Sinclair-owned station in Austin. “Now, we can go live on Facebook for 30 seconds, 30 minutes or however long we need.”

In addition to breaking weather situations, Windler uses Facebook Live for nightly #ChiksChats (here’s a recent one), where she delivers the forecast and answers questions for the Facebook audience. She admits it’s a time commitment, adding an extra hour or so to her day, but she believes the connections she’s building are worth it.

NPR hosted “Head to Head,” a series of headline-writing competitions where NPR editors went up against the Facebook audience to see whose headline reigned supreme. The last edition of the show in March 2017 produced more than 75,000 views and 200 engagements. The show took advantage of crowdsourcing – about a third of the time, the story on npr.org ended up featuring a headline from the crowd.

Also, Fresh 102.7 FM in New York, WNEW-FM, gives its Facebook audience the chance to see behind-the-scenes as its on-air personalities interview some of the biggest pop musicians in the world. The radio station, which is owned by CBS, has aired interviews of Lady Gaga, Michael Buble, Ed Sheeran and James Bay on Facebook Live. The Buble broadcast generated nearly 182,000 views, more than 4,000 reactions and 300 shares.

Tribune Broadcasting, which owns or operates 42 stations in the United States, is using social media in a different way for morning TV news – leveraging data to figure out what people are, and will be, talking about.

Tribune has partnered with Dose, a digital media agency that specializes in analytics and sharable content, to create “Morning Dose.” The show features content that Dose has determined will connect with audiences on TV and social, based on data analytics, and will be part of that day’s social conversations. Beyond top stories and weather, “Morning Dose” features segments like “What’s Brewing,” “Bubbling Up” and “Most Ignored Story of the Day.” Personalities from Dose also make appearances on the show.

TEGNA, a broadcasting company that owns or operates 46 local stations across the country, is also experimenting with more original programming as part of a new content transformation strategy.

Contestants send in one-minute videos in the “Sing Like a Star” competition.

“Sing Like a Star” is the third original show the company has produced, and it premiered in 33 TEGNA markets in September. The show marries a traditional television broadcast with digital participation from the contestants and audience. The idea for the show was sparked by the amount of digital activity tied to singing performance short clips like James Corden’s “Carpool Karaoke.” Hopeful contestants can download the Starmaker app, upload a one-minute audition and try to get votes through the app. The broadcast itself is 30 minutes each weekend, and the segments are tailored to also appease the crowd watching via mobile or social.

“What we did, because it’s a 30-minute show, is we made all of the singing performances right at one minute long,“ said Ted Eccles, the executive producer of “Sing Like a Star.” “They really hit that sweet spot for sharable content and digital viewing. Traditionally when you get a singing competition, somebody is singing a whole song or most of the song – even ‘Idol’ and ‘The Voice’ would do two- to three-minute versions of the song. We’ve found about a minute is the optimum amount of content that people like to watch on a smaller device.”

“Sing Like a Star” is airing on the weekends in those 33 TEGNA markets, and Eccles said they’re pleased so far with the ratings.

Another place for newsroom innovation is dual-screen experiences – turning television viewers into active participants in the broadcast while using their smartphones, tablets or computers.

TEGNA is currently partnering with Megaphone TV to use its platform for viewer participation during local news and sports broadcasts. For example, KUSA in Denver has used this technology to allow viewers to have a vote on which local topics are covered in newscasts. In addition, WFAA in Dallas regularly allows viewers of sporting events to participate in polls and quizzes through the station’s app or website.

WJLA, a Sinclair-owned station in Washington, DC, has also had success using Megaphone and similar platforms for real-time polling and audience engagement during newscasts.

“We try to incorporate viewer interactivity in every newscast,” said Simon Landau, the executive producer of digital media at WJLA. “Whether it’s showcasing social media commentary around a trending topic, photos sent in by our audience or asking a poll question, we try to engage our viewers in every show.”

Landau said the station typically focuses on breaking news, talkers and polarizing issues for audience engagement opportunities, but they’ve also seen success with big “national days,” like National Cat Day or National Pizza Day, when it comes to viewers wanting to be a part of the content.

TEGNA is also focusing on the concept of three-screen experiences. According to Frank Mungeam, TEGNA’s vice president of digital content, they’re taking a more holistic approach to storytelling – where the story will ultimately be the combination of experiences the audience has with that content on television, digital and social.

“We’re looking to take a page out of the movie industry with the concept of the trailer and the movie,” Mungeam said. “In older days of broadcast, folks would say, ‘You can’t give it away. You have to save the good stuff for 5 p.m.’ What we think of with effective trailers – think “Game of Thrones” or “Star Wars” – is there anyone who saw the trailer and thought, ‘That’s all I need of that’? The trailer is content itself, and these experiences, over time on these platforms, build interest in the overall broadcast story. Our three-screen strategy is how to use those three platforms for what they do best. For social, focusing on sharable, interactive and engaging content. For digital, it’s the deep dive, the more, the extra. For broadcast, it’s great, narrative storytelling.”

Mungeam said the ultimate goal is for these experiences from one story to last for multiple days on multiple platforms – instead of airing one time on a television newscast. This strategy gives consumers a greater chance to see content, and keeps the community thinking and talking about important issues in the news.

Speaking of using content on multiple platforms, StormPins, an app that originally launched as a way for Graham Media stations to collect storm photos and videos from users, has been expanded to include all kinds of user-generated content.

Using an app, viewers can drop an interactive pin on a map and attach up to 10 seconds of video or a picture – and then communicate and engage with other viewers in that area. Viewer submissions are often used on air.

“When there is a weather event, we definitely get a lot of storm pictures,” said Scott Shiotani, the director of new media at KSAT, the ABC affiliate in San Antonio. “Outside of a storm event, pets would be the biggest category, followed by sunsets and landscape pictures.”

From user-generated content to picking the stories that will be reported, the audience has more opportunities than ever to engage with broadcast news. As more stations, both TV and radio, begin to change content strategies, this will only continue to expand the audience’s role as participants in the programming – no matter the platform.

Note: This is a sponsored post from NAB Pilot to promote its Innovation Stories section. Read more about how broadcasters are innovating here.