Why ‘Dialogue Journalism’ Is Having a Moment 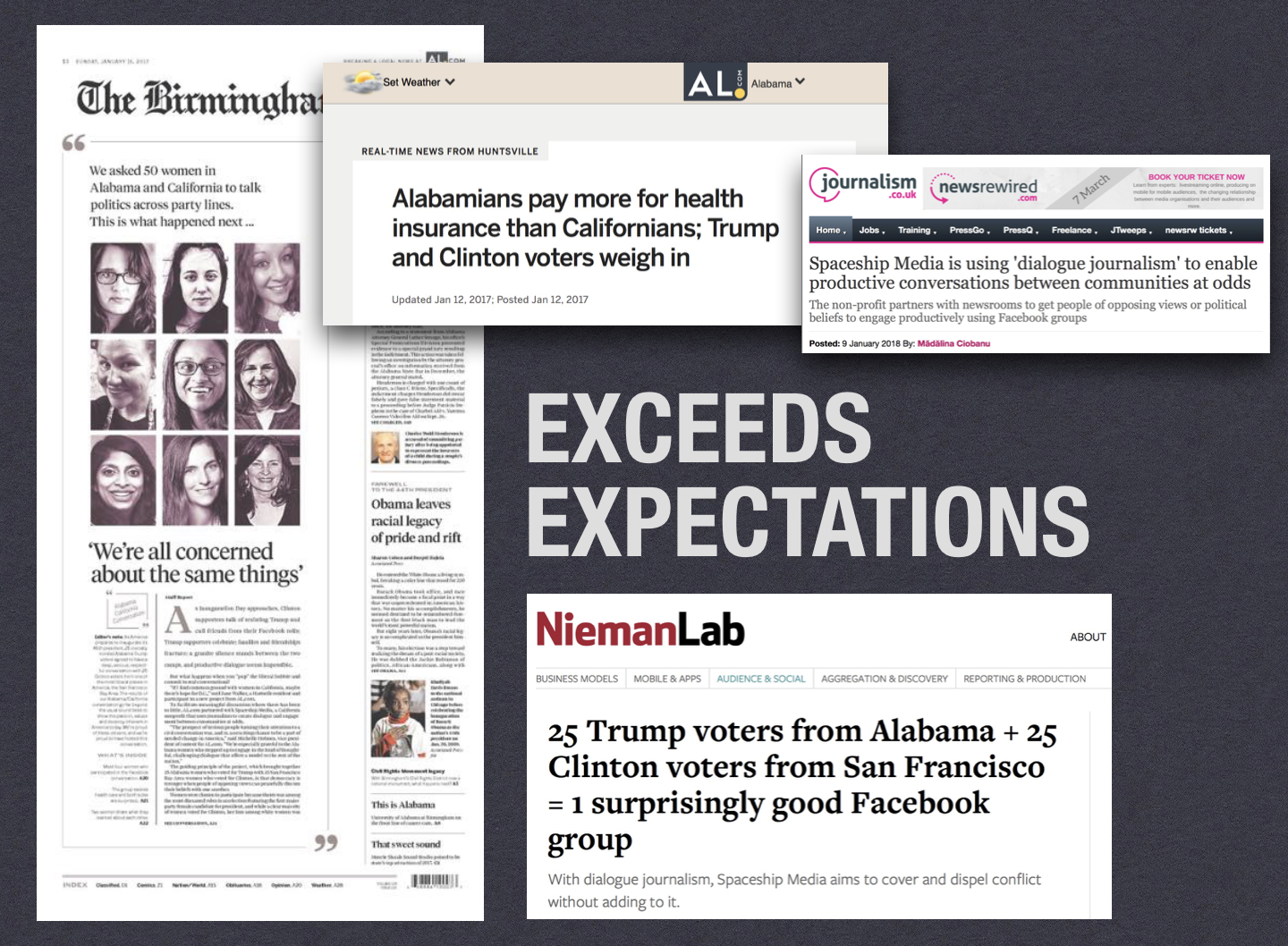 Turn on the TV today, and chances are you’ll see political commentators sparring. Log on to Twitter and you’ll see the latest heated tweet from President Trump. We’re living in a time of overwhelming connection thanks to the interwebs, but chances are, we’re not nearly as connected to those those who don’t hold similar beliefs.

In a polarizing moment when trust in media and the government is low, a number of new projects, now sometimes called “dialogue journalism,” from organizations including Spaceship Media, Hello Project and the Seattle Times are focusing on bridging communities and pushing diverse viewpoints.

“People want to engage with people who they have different beliefs and opinions from, and journalism can play an important role in making sure that happens.” - Jeremy Hay, Spaceship Media

Dialogue journalism, a term coined by Spaceship Media, uses engagement projects to tap into nuanced audiences, providing them with a platform—such as a Facebook group or a video call—to encourage sometimes difficult conversations. Journalists are present to help guide the dialogue, fact check and use the platforms as a launch pad for stories.

These projects attempt to use journalism to bring together a diverse set of backgrounds, whether it’s race, voting preferences, sex, geographical location, or other factors. Rather than focusing on “coastal elites,” they aim to reflect a spectrum of thoughts and experiences amongst a wide range of Americans.

It’s not everyday that you see Trump voters from Alabama and Clinton voters from California in the same, direct conversation. That’s what Spaceship Media did in one of its first projects.

Spaceship Media, which launched after Trump’s election, organizes those private conversations in Facebook groups, by partnering with various news organizations, as a part of their seven-step system of dialogue journalism. Within those private groups, journalists fact check to keep any claims on track and objective and help steer the conversation. They then follow up with published articles (e.g. from the partner publications) on what participants learned or larger topics that came from the group. The conversation doesn’t stop within the private Facebook group, but rather, it’s used for story ideas.

“We’ve bet on that people do want to talk across difference,” says Jeremy Hay, a co-founder of Spaceship Media. “People want to engage with people who they have different beliefs and opinions from, and journalism can play an important role in making sure that happens.”

They brought together these two groups (of 50 women) who are often pitted against one another, and put them in a private Facebook group. Spaceship Media organized a callout in the Alabama Media Group publications and social channels, and networked in the Bay Area with the help of a freelancer who did outreach via social media channels. In the Facebook group, they talked about issues ranging from immigration to Black Lives Matter to abortion to holiday traditions.

“When people take these experiences where they can’t talk to their cousins, aunts, or in the workplace, it doesn’t feel good for anyone,” says Eve Pearlman, a co-founder of Spaceship Media. “So by using journalism to create these extended dialogues, we give people a place [a private Facebook group], which feels much better.

When the Facebook group closed at the end of the month-long project, the majority of them created their own to further the discussion. While nobody changed their minds about their choice of candidate, the women began to see why those from other states may hold such different views. For instance, health care costs have risen more rapidly in Alabama under the Affordable Care Act than they have in California. Support for the ACA was high amongst the California women, but was a major concern for Alabama women. “Those numbers you posted were out of control,” said Monica Rowden, a Bay Area clinical social worker, said in a discussion about healthcare premiums.

The Seattle Times created a one-off multimedia project, “Under Our Skin,” that grew out of journalists’ questions about how they cover race in a climate of police shootings and protests dominating the headlines.

The goal was to “foster a conversation around race and the varied perspectives Americans have,” says Michele Matassa Flores, managing editor of the Seattle Times. They hoped people would “open their minds and question their own attitudes.”

It features in-studio videos of 18 people of different racial backgrounds talking about their reactions to terms, such as “institutional racism,” “all lives matter,” and “white fragility,” with the aim to create a feel of a conversation amongst strangers.

For instance, responses to the phrase, “all lives matter,” elicited nuanced reactions. “That’s white privilege,” says Tariqa Waters, a black visual artist. Whereas Mark Olsen, a white student at Northwest University says, “I think some people perceive it (Black Lives Matter) as not being helpful; people walking on the freeways and smashing things.”

The project has been used in classrooms, workplaces, churches and government agencies and more. It won an Online News Association award for Explanatory Reporting at a medium-sized newsroom, which considers the quality of the journalism and the digital production and design of the coverage. The judges said “the material allowed the audience to come at things from all different angles in a clear engaging way.”

Sometimes, the process of organizing groups of people can get complicated. Yvonne Leow, a journalist and the founder of Hello Project and GoatTalks, partnered with AJ+ in the aftermath of Trump’s election for a series of videos that virtually brought together people of different backgrounds to discuss various topics that were being covered in AJ+ videos, including the election, homelessness and North Korea. The project, which received a $15,000 grant from the Jim Bettiger Newsroom Innovation Fund to partner with AJ+, featured direct, 20-minute, one-on-one private video calls so that people would feel safe having honest conversations. These strangers were organized via google forms shared through AJ+’s large digital audience.

“I was seeing a lot of divisive rhetoric from both sides and more importantly, realizing the bubble I was in,” says Leow. “I was interested in seeing other perspectives and if other people were also interested in that.”

“The goal was to give the audience a chance to take the conversation out of the comments, and then have them fill out a survey afterward to see if this changed their minds, or was more effective or interesting than arguing in the comments,” says Alexia Underwood, previously a senior producer at AJ+ who helped organize the project.

However, scheduling these strangers to find overlapping time to sit down and talk big ideas proved to be a problem: Not enough people signed up and even when people were successfully matched, oftentimes, they wouldn’t show up. They weren’t able to move forward with the next phase of the project—a media product out of the conversations.

“There was the question of how we were going to use this information in the newsroom; was there a production component or information gathering component,” says Underwood. “Could the surveys be used to learn something intrinsic or interesting about our audience, or were they there simply to provide a value add to users who enjoyed the AJ+ video experience and wanted a further opportunity to chat about it with a stranger? Because the logistical side of things never panned out, we weren’t really able to move forward very far with the project, but I think that if the logistics hurdles were a little lower, then it could in theory be an interesting conversation forum about issues that our audience cared about.”

Another learning experience for Leow was realizing the importance of knowing the community you’re serving.

“It’s much more about the quality than the quantity or the scale,” she says. “It’s about walking away with that connection, not just the arbitrary comment. The goal to see each other as people, and less as usernames.”

They drew upon a potentially large audience, but the community they were serving wasn’t obvious and focused enough. Something more targeted and impactful, says Leow, would be bringing Bay Area people together to discuss homelessness and the housing crisis, for instance. She realized that sometimes journalism work can make a bigger impact with a smaller, more defined audience.

What’s Next For Dialogue Journalism

Spaceship Media is currently working on a larger-scale project, The Many, which will also take place in a closed Facebook group, but will focus the conversation on thousands of women across the country with personal stories and political discussions.

Leow is currently helming By the Bay, with the goal of demystifying local issues and politics. Topics include how you pass a law in San Francisco and why the city is facing such a housing crisis. They’re still building the tool, but users will be allowed to contribute facts in order to create “hubs of local information.”

“I can’t say this is something that needs to be done over and over again, because who knows what will happen 10 years from now,” says Leow. “But I think the idea is to tap into their [community] needs and think of ways to better serve them.”

UPDATE (2/20/18): After the publication of this story, we received a note from the co-founders of Spaceship Media, Eve Pearlman and Jeremy Hay, who asked us to clarify that Dialogue Journalism is Spaceship Media’s seven-step process of creating, moderating and reporting on journalism-supported conversations across social and political fault lines. You can read more about the genesis of Dialogue Journalism in this Neiman Lab story.

Tiffany Lew is a multimedia journalist based in California. Her work has appeared in publications including AJ+, Mic, Scholastic, Fusion, Frommer’s, and The Hechinger Report. She’s a graduate of Columbia Journalism School. Follow her on Twitter: @tiffjlew