How to Teach Reporting on Sexual Abuse 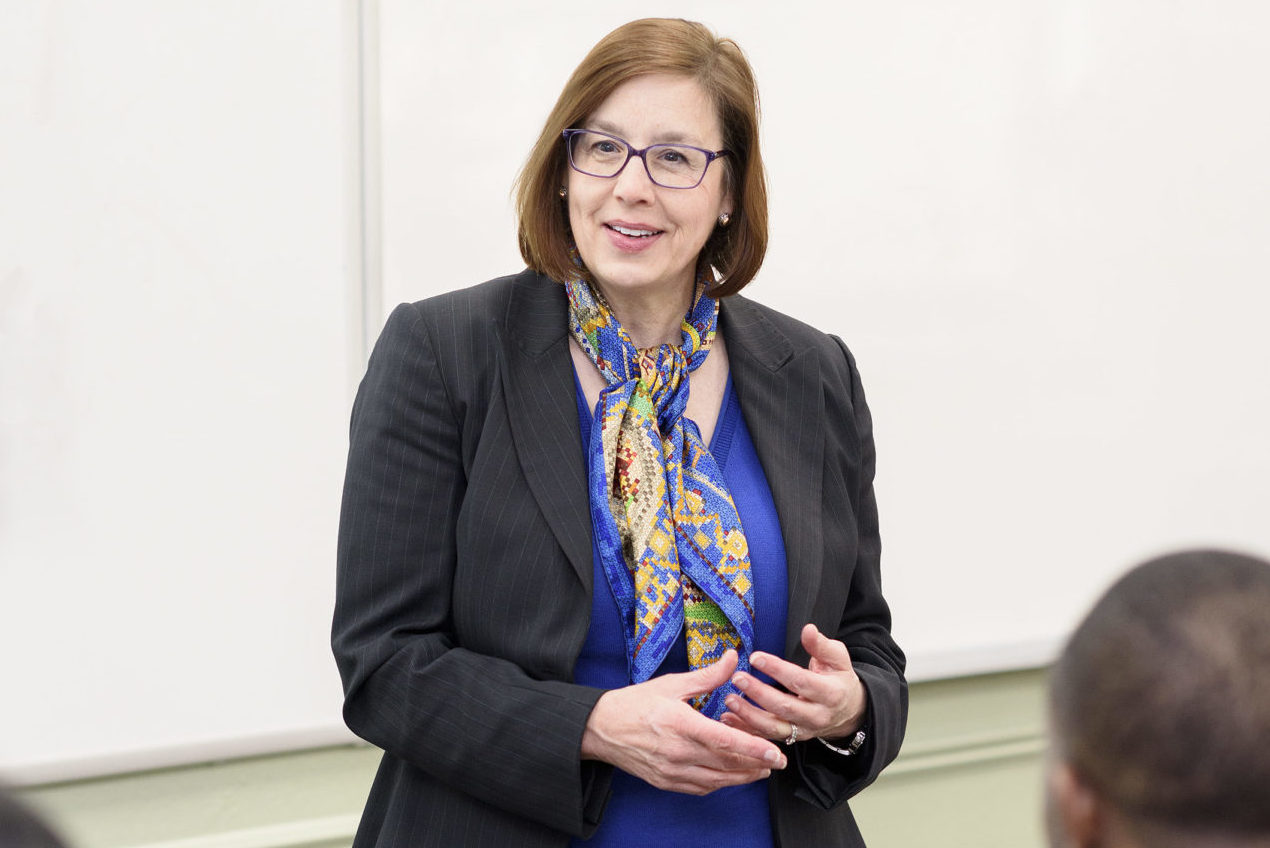 Tracy Everbach, associate professor of digital/print journalism at the Mayborn School of Journalism at the University of North Texas, speaks to one of her classes. (Photo: Ranjani Groth/UNT)

In November 2017, a group of students in a Utah State University journalism class were fact-checking articles on sexual assault charges against U.S. Senate candidate Roy Moore. Students universally noted that the only sources in the articles were white men, all of whom seemed to be friends with Moore.

Students in Candi Carter Olson’s class also identified comments in other articles about the Alabama Republican Senate candidate, who was accused of initiating a sexual encounter with a 14-year-old girl when he was 32 and pursuing several other teenage girls when he was in his 30s:

"Accurate and fair journalism is essential to changing rape culture."

The discussion led one student to raise her hand and ask earnestly, “If we can’t use the name of survivors in stories, then how do we get their voices into stories? These stories are obviously biased, but as journalists, how do we fix that bias?”

This question is perhaps the most important one that we professors and professional journalists are tackling right now: How do journalists handle these types of stories and include survivor voices in a respectful way?

While this is a conversation that needs more analysis than one article, we’ve developed steps that instructors can use when training students to be responsible media producers on the topics of sexual assault and harassment.

It’s important for students and instructors to understand that every story about sexual assault and harassment occurs within a much broader cultural context.

Rape culture is real and is defined as an accepted societal belief that normalizes rape, sexual assault and sexual harassment. Rape culture blames the victim for her or his own assault or harassment and encourages myths such as “she asked for it,” “he couldn’t help himself” and other falsehoods.

By talking about rape culture and teaching students how to tell individual stories as part of a much larger cultural conversation, we will give our students and their readers the tools to understand not only how each individual assault happens, but also how those assaults are part of discussions on gender, women and men.

Rape Culture Pyramid by Ranger Cervix & Jaime Chandra, based on Version 2 created by Kate Seewald of ActionAid / Safe Cities for Women and original concept by Ranger Cervix is licensed under Creative Commons BY-NC-SA

Step 2: Use Empowering Language in Reporting About Sexual Assault, Rape

The Associated Press Stylebook offers surprisingly little help on covering sexual abuse, beyond an entry under “privacy” that tells us not to identify people who have been sexually assaulted unless they voluntarily identify themselves.

That same group of journalism students at Utah State University exploring how to analyze news reports about Roy Moore asked, “Why don’t we name survivors?”

This led to a conversation about personal violations that occur during and after a sexual assault or harassment. Survivors whose names are reported without their permission are often subjected to a level of scrutiny and criticism that far surpasses that faced by the accused. The news media, in effect, become judge and jury over the survivors.

Gymnast Rachael Denhollander bravely chose to file the first police complaint against Larry Nassar, longtime doctor of the United States Gymnastic teams and Michigan State University’s athletics programs. Her experience after that filing is a case study about why so many survivors choose not to come forward. Even though Larry Nassar faced more than 150 survivors who gave their statements in the courtroom and was eventually convicted and sentenced to prison for up to 175 years, Denhollander lost her church, friends and “every shred of privacy.”

If we cannot report names without permission, then how do we empower survivor voices and put them in our stories?

First, we should teach students how to use key terminology when referring to survivors or victims, rape and sexual assault, and other loaded terminology. This handy guide from RAINN breaks down the most important terms and phrases people will use in their stories. Hand it out to students and make sure the link is somewhere accessible for everyone in your department to use.

The Dart Center for Journalism and Trauma is a stellar resource for reporting on sexual violence. For example, it advises: “Rape or sexual assault is in no way associated with normal sexual activity; trafficking in women is not to be confused with prostitution. People who have suffered sexual violence may not wish to be described as a ‘victim’ unless they choose the word themselves. Many prefer the word ‘survivor.’”

Second, compile a list of sexual assault support services in your area, including those on campus. Advocates, rape crisis centers, lawyers who specialize in sexual assault and harassment, survivors who have come forward with their names, and psychiatrists and psychologists who work with survivors all are possibilities.

Have your students brainstorm ideas with you, and you’ll find they become invested in the topic and spark ideas we may not have considered as professors and journalists who handle this regularly. Sometimes, it really does take a fresh set of eyes to make sure that we are doing the best we can to be responsible journalists.

Step 3: Understand how to report with context

Always show compassion for those who are victims or survivors. The National Sexual Violence Resource Center, a Justice Department-funded agency, finds that a majority (63 percent) of sexual violence cases are never reported to police.

Such accusations are rarely false, and we should understand it takes courage for someone who has been abused to come forward. The Sexual Violence Resource Center also finds that only about 2 to 7 percent of sexual violence cases are falsely reported. Therefore, as journalists, we should always be skeptical, but we should keep in mind that false reports are a tiny proportion of reported cases. Some news organizations jump on these false reports as big stories, which causes them to appear more prevalent than they really are. However, if reporters tackle these stories within a broader context, they won’t dominate the headlines.

This leads to our next point: We should teach students to place individual cases within that broader context and focus on stories that show just how many people sexual abuse impacts every year. Topics to address include:

This is an excellent video that helps define consent by comparing it to a cup of tea. College students love it. (Profanity warning here. There also is a “clean version” for middle and high school students.)

At this point, we are guessing some instructors and journalists are asking, “What about the Rolling Stone story?” The magazine ran a story in 2014 that described a gang rape at a University of Virginia fraternity. The story was later debunked and the magazine retracted it. Rolling Stone was ordered to pay the fraternity $1.65 million.

While the Rolling Stone story had many problems, the main ones were not false accusations, rather journalistic failures. The story was based on one source, a survivor who apparently had been through a traumatic experience at some point. The reporter and editors did not check or corroborate records and sources to verify details of her story. Columbia Journalism Review took the story apart in detail, calling it “a failure that was avoidable.” CJR also published tips to avoid repeating those mistakes and noted that the incident should not deter journalists from reporting on the valid problem of campus sexual assault.

Journalists reporting on these types of stories need to know some of the basics about sexual abuse and violence, as well as myths that continue to be perpetuated. Accurate and fair journalism is essential to changing rape culture. It also is the first step to changing sexual harassment behaviors in newsrooms.

For a more robust discussion about discussing and coverage issues of sexual abuse in the journalism and mass communications classroom, join us for the February #EdShift Chat on  Wednesday, Feb. 28 at 1 p.m. Eastern / 12 noon Central / 10 a.m. Pacific Time using the #EdShift hashtag on Twitter.

NOTE: Some of this content previously appeared in a piece Tracy Everbach wrote for the Media Diversity Forum.