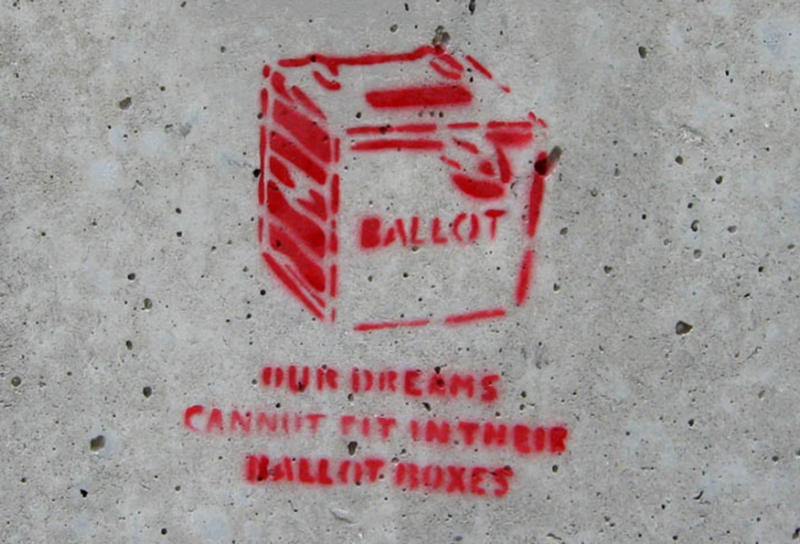 Stencil art in Wisconsin, US. Photo by David Drexel via Wikimedia Commons (CC BY 2.0)

The specter of “fake news” is still looming large and the power of internet companies to control and capitalize on news distribution seems to grow greater by the day. This has democratic leaders around the world scrambling to rein in free speech laws and to distinguish between the motivations behind online news and information — whether they be political power, money, or the simple free exchange of ideas.

The specter of “fake news” is still looming large and the power of internet companies to control and capitalize on news distribution seems to grow greater by the day.

In early December 2017, Brazil’s government established a council to monitor and possibly order the blocking of false news reports on social media ahead of the 2018 presidential elections. The news swiftly raised concerns about censorship among the public.

In its first meeting, the council proposed to create a tool through which users could file reports to the council of news that appeared suspicious.

Previous attempts at such control have yielded mixed results. When Facebook introduced a “report fake news” feature in December 2016, many users reported fake content as part of an effort to discredit information or ideas with which they disagreed, even when those ideas were based on verified facts.

In addition, a new bill before the French Congress that is intended to target sponsored content on social media platforms. If adopted it would require social media platforms to ‘’make public the identity of sponsors and of those who controls them,” and to impose limits on the amount of money paid to sponsor such content.

The law’s purpose is to “protect democratic life,” according to Macron.

In both France and Brazil, it remains unclear precisely how government actors will compel social media companies to identify and/or remove such content at this scale.

Colonel General Nguyen Trong Nghia, deputy chairman of the General Political Department of the People’s Army of Vietnam, announced at a December 25, 2017 meeting that the military has created a special force tasked with “combating wrongful information and anti-state propaganda.” The special force already has 10,000 workers.

Photo of an internet cafe in China by eviltomthai on Flickr and used with Creative Commons license.

China’s state-run Xinua news agency reported on January 8 that approximately 128,000 websites were censored in China in 2017 due to “harmful” content, including news from “unauthorized” sources, material said to threaten “social stability”, and pornography. Most recently, Cyberspace Administration officials penalized the popular Toutiao news aggregator app, which they said had illegally distributed news content without having obtained necessary permissions from the authorities.

A Beijing court agreed to hear a case addressing the media regulator’s censorship of LGBTQ content online. In June 2017, the China Netcasting Services Association sparked outrage when it issued new rules banning online content that depicts “abnormal sexual relations or behaviour,” including homosexuality. The lawsuit—filed by 30-year-old Fan Chunlin from Shanghai—challenges the media regulator to provide a legal basis for the description of homosexuality as “abnormal.” The court is expected to deliver a ruling within the next six months.

In Jiangsu province, a court agreed to hear a challenge by a consumer rights group against Baidu, one of China’s largest internet companies. The Jiangsu Provincial Consumer Protection Committee charges that Baidu products, including its mobile app and web browser,are accessing users’ messages, phone calls, contacts and other data without their consent.

Indonesia’s Ministry of Communications and Informatics has deployed a new program that is intended to enhance the process of blocking “negative” content on the internet by using artificial intelligence. Known as “Cyber Drone 9,” the program combines new technical tools (which do not actually include drones) with a team of staff who will monitor “negative” content identified by the software and decide whether it should be censored.

Visiting the US? You might have to hand over your mobile phone.

United States border agents reportedly searched 30,200 devices in 2017 for both inbound and outbound travelers, in comparison to 19,051 in 2016. The U.S. agency of Customs and Border Protection issued new guidelines requiring devices be unlocked on request and authorizing agents to copy and save information that they obtain through travelers’ mobile phones, among other measures.

Internet and mobile phone penetration are rising everywhere — except in Venezuela

The Venezuelan news and commentary site El Estimulo published an in-depth report(in Spanish) on falling rates of internet and mobile phone connectivity in Venezuela. The article highlights International Telecommunication Union statistics showing that mobile phone penetration has dropped from 102% in 2012 (a number reflecting individuals with multiple mobile phones) to 87% in 2016, and also charts damage to subterranean internet infrastructure that the state has failed to repair. The article quotes Global Voices author Marianne Diaz:

The increasing deterioration of infrastructure is neither coincidental nor accidental. It is the result of decisions and policies implemented by power structures. The end result is that it is making citizens suffer the consequences of infrastructural decay and the state is not upholding its obligations to guarantee access to basic services…

The Tunisian government withdrew a proposed law on January 9 that would have imposed a national biometric identification scheme for all Tunisian citizens. The withdrawal was due in part to an influx of requests and amendments proposed by the parliamentary commission of rights and freedoms, many of which were drawn from citizen input.