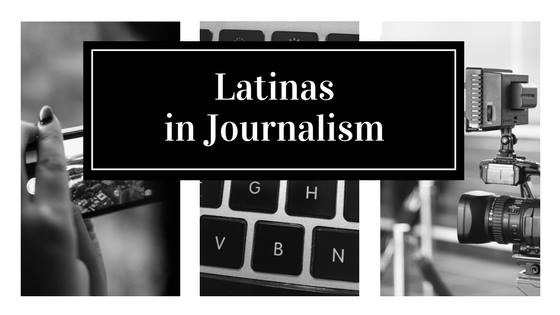 Cover art by Rebecca Aguilar for the Facebook page.

When it comes to hiring and promoting Latinas in newsrooms, the powers that be often blame a lack of progress on their inability to find enough candidates with the requisite qualifications, also known as the “pipeline” problem.

As a response, Dallas-based former television reporter Rebecca Aguilar launched a Facebook page called “Latinas in Journalism.” Within four hours of its November launch, the page got 200 members. Within three days, it was up to 1,000. Today, it has almost 1,400 members and more joining daily.

The page is used to share job postings, internship notices, news stories, advice and encouragement and its members  include full-time Latina journalists, editors, producers, freelancers, academics and students of all ages and experience levels who work in English, Spanish or both.

Opening the Door Ourselves

“If no one else will open the doors for us, we will open them,” says Aguilar, adding that the word “diversity” has become mere lip service by editors and managers who hire at media outlets across the country.

“Latinas are loyal, hard workers. I think it’s time for us to have our day whether we work in English- or Spanish-language media. We deserve the opportunities, the pay and definitely the recognition,” she says.

Ivette Davila-Richards, who spent the last decade as an associate producer at CBS News as a multimedia bilingual producer, agrees that the pipeline argument is a fallacy. “I’ve heard this statement personally and have been perplexed, and appalled by it. It stands to be said that women (let alone Latinas) are not thought of or considered for various reasons. But a male who might’ve started at the same time as a woman in a position will be told about an opening first, before a woman,” she says.

To be sure, the number of Latinas in newsrooms does not nearly reflect the size of the country’s population. Of the 56.5 million Hispanics in 2015, which account for 17.6 percent of the total U.S. population, about half are female, according to the U.S. Census.

Aguilar, 59, is no stranger to using social media to connect like-minded individuals. A few years ago, she launched a “Wise Latinas Linked” page on Facebook and LinkedIn in honor of Supreme Court Justice Sonia Sotomayor, who has often said her rich life experience helps her make better judicial decisions. It now has close to 9,000 members.

For the Latinas in Journalism page, Aguilar says she uses her reporting skills to vet the women who ask to join. Nothing is sold or promoted on the page. Instead, her goal is to have Latinas use it to post job, fellowship and scholarship opportunities for other Latinas, who range in age from 18 to 60 and span the globe.

“I hope that when somebody in a media company says, ‘I can’t find somebody qualified,’ that they will turn to us and say, ‘We have a job. Can you post it in your group?’” says Aguilar, who is currently working on a master’s degree at the University of North Texas, consulting, and freelancing after a long a career in front of the camera in Toledo, Ohio, Corpus Christi, San Antonio and Dallas, Texas, Phoenix, and Los Angeles.

Beyond job postings and such, the group connects women in different cities physically and via Instagram and Twitter, gives shout outs for various achievements, such as graduating from college, and provides advice on matters ranging from graduate school applications to book publishing and digital tools.

One recent posting by Aguilar criticized the lack of Latina representation on network morning shows. “Even during the holidays we don’t get to fill-in anchor. In TV news everyone knows the anchor position is one of the most important jobs. This is where organizations like [the National Association of Hispanic Journalists] should make noise. This is where managers and producers on the inside should speak up. Each network has a “diversity” VP. Don’t they see we are not at the table? Heck they can call me and I’ll give them a list of Latina and Latino anchors who are excellent. We need to create change,” she wrote.

The group has definitely filled a void with Latinas, says Claudia Tristan, a 27-year-old reporter for the Sinclair/Fox duopoly in El Paso, Texas. “As a Latina journalist I have had zero newsroom mentors. Instead I have had to turn to Latinas not in my newsroom for guidance through the business.

“There are few other people in the business that experience the discrimination that we do and thus can guide us through it. Particularly at a political time where our heritage is under the microscope, now more than ever we need to be able to find help from each other,” she says.

Tristan says too many Latinas in newsrooms are used as “props” to fill a quota, and are often paid less despite being bilingual. “We also have the task of educating our newsroom about political correctness. I can no longer keep track of the number of times I’ve had to explain the difference between ‘illegal immigrant’ and ‘undocumented immigrant’ to my coworkers, including my bosses, she says.

Daniela Ibarra, 20, just graduated from the University of North Texas, and will be starting a graduate program there in Critical and Industry Studies. She belongs to other Facebook groups for women in media, but Latinas in Journalism is her favorite. “I know when I post in LIJ, I’ll get feedback. This may sound a little strange, but even thought I don’t know most of the people in the group personally, I feel like they’re extended family,” she says.

Betty Del Rivero, the publisher of Long Beach Al Dia, a Spanish-language magazine in California, says increased communication between Latinas in the media will help “change the mindset of our male counterparts in newsroom administration, and show them that we are not only pretty, but professionals capable of doing our jobs pretty well.”

Aguilar is angry and frustrated about the lack of Latina representation in the news business. But more than anything, she wants to give Latinas hope in a business that sometimes makes them feel hopeless.

“We’re in a business that’s tough. We rarely get a pat on the back. We struggle to get raises and promotions. Sometimes you just need to hear from someone who says, ‘You can do this.’ Even if it comes virtually, it can help pull you back from the ledge,” says Aguilar.

Laura Castañeda, Ed.D., is a Professor of Professional Practice at the USC Annenberg School of Journalism.