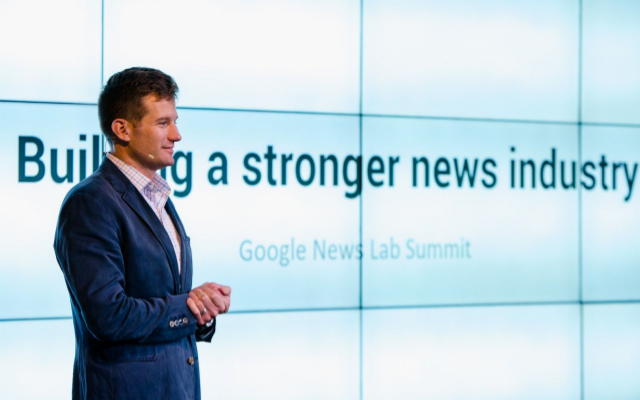 In the news this week, Disney is in advanced talks to buy cable channels and a movie studio from News Corp., and James Murdoch is rumored to be a CEO-in-waiting at Disney if the deal goes through. Vice Media fired three men over sexual harassment charges, and holiday parties at Vox and other companies will be serving less alcohol to make sure employees don’t get into more trouble. Facebook suspends women’s accounts for saying that “men are scum” and “all men are ugly” leading to protests and a new site called “facebookjailed.com.” Our Collaboration of the Week, presented by Airtable, is 100 Days in Appalachia, which covers an underreported area in American culture and politics. Our Metric of the Week is Paywall Metrics as the New York Times lowers free articles down to 5 per month, and Steve Grove of Google News Lab joins us to talk about the big ups and downs for the tech giant this year.

Steve Grove leads the News Lab at Google, the company’s division focused on partnering with media and entrepreneurs to build the future of the news industry. Steve began his career at Google in 2007 when he started YouTube’s news and politics team. Previously, Grove wrote for the Boston Globe and ABC News. Steve serves on the Advisory Board of Witness, a video human rights organization, and is a Truman National Security Fellow.

James Murdoch to Take Over at Disney?

As cord cutting and home movie viewing accelerate, the media conglomerates are in for a big shakeup. In one case, a new steward may be coming to the mouse house. Disney is seeking to buy parts of 21st Century Fox, which could place James Murdoch, Fox’s chief executive, in prime position to take over as head of Disney down the line. Current CEO Bob Iger is due to retire in 2019, and Murdoch, son of Rupert Murdoch, would also oversee Sky broadcaster in the U.K. and Star cable network in India as an incoming senior executive. Disney has been in talks to take over Fox’s movie studio, cable channels and international units. The deal would exclude the Fox broadcasting channel, Fox News and Fox Sports.

Analyst Michael Nathanson told the Financial Times that for James Murdoch, “Disney is like any other company in that he would have to prove himself first. I could see him running Star, Sky and the international businesses and proving himself that way.” According to the Wall Street Journal, James Murdoch is keen to pursue a career away from his father Rupert and brother Lachlan. Buying parts of Fox would give Disney even more content for its forthcoming streaming video service to challenge Netflix and Amazon. Both Comcast and Verizon have experimented with streaming video and are also bidding to take over the Fox assets. So far, “no promises have been made,” about James’ future at Disney, said a source to the Financial Times. In any case, the media executive shuffle will continue for as long as digital disruption changes the fortunes at cable networks and movie studios.

Following a nationwide reckoning over sexual harassment within the workplace, some media companies are taking steps to improve workplace culture. Vice Media fired three employees after investigating complaints of sexual harassment and improper workplace conduct. A statement from Vice read that: “The conduct of these employees ranged from verbal and sexual harassment to other behavior that’s inconsistent with our policies, our values, and the way in which we believe colleagues should work together.” Earlier this month The Daily Beast published an investigation into Vice that detailed the company’s “sexual harassment culture,” including by Jason Mojica, head of the documentary films unit. Mojica told Variety that he was one of the three who were fired, though Vice didn’t release any names.

Since the news first broke, Vice has hired its first global human resources officer and has a new “Diversity & Inclusion Advisory Board.” The company is also introducing new sensitivity training for employees and a hotline to anonymously report inappropriate conduct. To head off further harassment problems, many corporate holiday parties are cutting back on alcohol. The management at Vox decided to cut back on booze to discourage “unprofessional behavior.” In a memo, they told employees they would no longer provide an open bar at the holiday party, but would provide two drink tickets for each employee. According to a survey by Challenger, Gray & Christmas, only 49% of companies plan to serve alcohol at holiday parties this year, down from 62% last year. Let’s hope this increased awareness at companies continues into the new year.

Women are reporting that Facebook is suspending their accounts because they have posted comments like “men are scum” or “all men are ugly,” often in response to male trolls. Comic Marcia Belsky had her account banned for 30 days after sarcastically replying to a friend’s post by saying “men are scum.” Another woman, Kayla Avery, said her page was flooded with trolls calling her derogatory and sexist names, but she was banned for posting the comment “men continue to be the worst.” Realizing this was a widespread issue, Avery has since created a site, facebookjailed.com, that compiles stories from other women who were banned from the platform.

According to a ProPublica investigation from last summer, white men are considered a protected class on the platform. Because Facebook’s moderators are viewing posts without any information about the author, something that may have been ironic or intended humorously can get misconstrued. So they might not be able to tell if the author was an alt-right troll with a history of posting hateful messages or a comedian expressing frustration with sexual harassment. Facebook told The Daily Beast they were working to apply their policies “in a more granular way.” Hopefully Facebook moderators, who are being added by the thousands, can start to look at cases in a deeper way to figure out the context before banning people.

Cinemark will offer a subscription plan for $8.99 per month for movie tickets and concession discounts to take on MoviePass

And Time’s Person of the Year is the “Silence Breakers,” women who have spoken up about sexual harassment in the media, film, tech, government and other realms