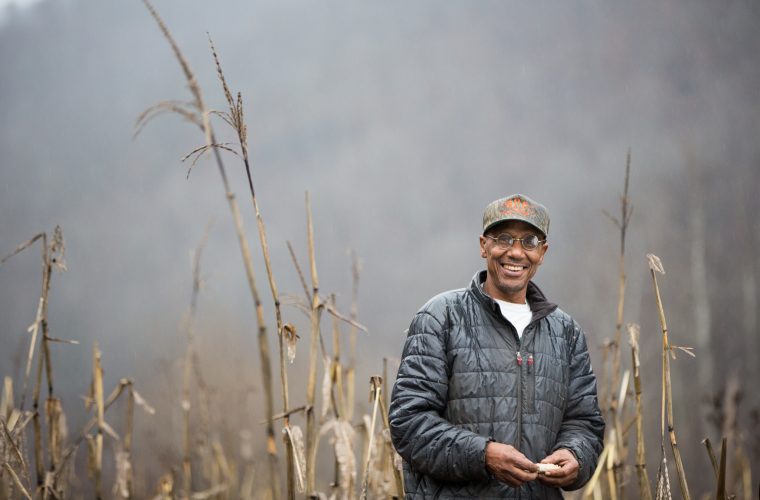 If collaboration is a way for journalists to investigate the scale of a global story or focus on a patchwork of community blocks, there’s most certainly a place for it in looking at the world through the eyes of Appalachia.

100 Days in Appalachia is a collaborative partnership focused on reporting on a region that is more complicated than commonly portrayed by the reporting trope of “Trump’s America.” Through the partnership, the project seeks to tell the complex story of Appalachia’s people, places and lives and to look at issues through the lens of what they mean for the region.

It was a project that was in planning stages for years, and finally came to fruition thanks to an important catalytic event.

Coester is the creative director and executive editor of 100 Days in Appalachia, based at West Virginia University’s Reed College of Media, where she’s also creative director of the WVU Media Innovation Center. She says the election was a catalyst to get things moving.

National attention for the project and the audience that’s building from outside the region is shifting the perspective on Appalachia both nationally and internationally according to Coester.

She highlights readership by journalists and politicians as a indicator of the broader impact the project is having. Especially when some of the most viewed content from the project represents a “polarized spectrum of audience.” Those pieces include a video series “Muslim in Appalachia 360° series and an interview with “the most interviewed coal miner in America.” These projects reflect a sense of in-depth reporting in the region that will hopefully contribute to the day-by-day work of rebuilding audience that Coester considers part of their work.

“As part of the Democracy Fund work, in 2018 we’ll be conducting a series of community engagement activities throughout the region to more formally measure impact, attitudes and trust,” Coester says. “We are learning that the national media landscape over the past few years has in a way “trained” audience members to view content and outlets through polarized contexts — that you must be one thing or another on a political spectrum. Breaking that expectation and rebuilding trust is part of the challenge we’re trying to address, one piece of content at a time and through these community engagement efforts.”

100 Days combines original reporting, content from writers and creators in the region, and partners republishing and amplifying each other’s work. It’s a combination that’s carried the project through 100 days and into almost a year of coverage come January.

Tim Marema, the editor of the Daily Yonder and the vice president of the Center for Rural Strategies, says that the success of and need for a project like 100 Days reflects a market failure for information in Appalachia.

“We have the same needs as any part of the United States for good journalism but we don’t have the market that supports and attracts the kind of journalism we need commercially,” Marema says.  “So this partnership between a nonprofit and an educational organization and a public broadcaster is market intervention if you will, to sort of jump start the journalism we need.”

Marema says there’s a need for national journalism in and about Appalachia, but there’s also a need for what 100 Days provides.

“I think in DC there is a lot of the idea that ‘If anything is going to matter it has to come through our lens first’ and we’re challenging that kind of thing, and saying that that’s definitely not the case,” Cooper says.  “It’s important to tell these stories with a sense of local history and local context and local nuance.”

Cooper is a recent addition to the team. She previously worked in DC covering policy at a couple different outlets focused on education.

“This really is a model that I think works for this kind of reporting,” Cooper says. “Because our project’s just such a wide region, it just makes sense to do things this way, to work with people who actually are living on the ground and in these small towns who we probably couldn’t physically get to come into an office and report for us.”

Support for 100 Days comes from Claude Worthington Benedum Foundation and the Democracy Fund with WVPB and WVU’s Reed College of Media contributing. As the project moves forward, exploring long term business models is a priority. 2018 will bring experiments in events and sponsored content with exploration of scaling the model to other regions. Coester highlights the power of cultural identity as an impetus to experiment with reader sponsorship.

Coester says the project works because of an engaged team that trusts and gives each other the runway for experimentation even when results are not immediately tangible. She says the partners are in frequent communication to work out the details of amplifying each other and republishing each other’s work.

For organizations thinking of trying their own take on a project like 100 Days in Appalachia, Coester highlights that experimentation and risk tolerance are part of the deal.

The experimentation and collaboration is paying off for 100 Days. The project is regularly publishing content about the region that goes beyond the surface observations and stories we’ve heard before. Coester says that pitches from potential contributors have grown and they now have to work hard to keep up with responding to them all. The project is leveraging the expertise of its different partners to try new stories and kinds of storytelling. The project’s photo profile series “100 days, 100 voices” by photographer Nancy Andrews strives to depict “the varied faces, passions, issues and opinions from around the region.” Coester highlights upcoming work about the role that religion plays in communities and politics as an example of digging deeper into topics that have regional significance.

“You’re in competition with everybody and that’s the natural thing for media,” Coester says. “But when the industry is as distressed as it is, and when a region is as distressed as [Appalachia] is, this seems like a really good way to create a network [where] the benefits can spread to more people.”