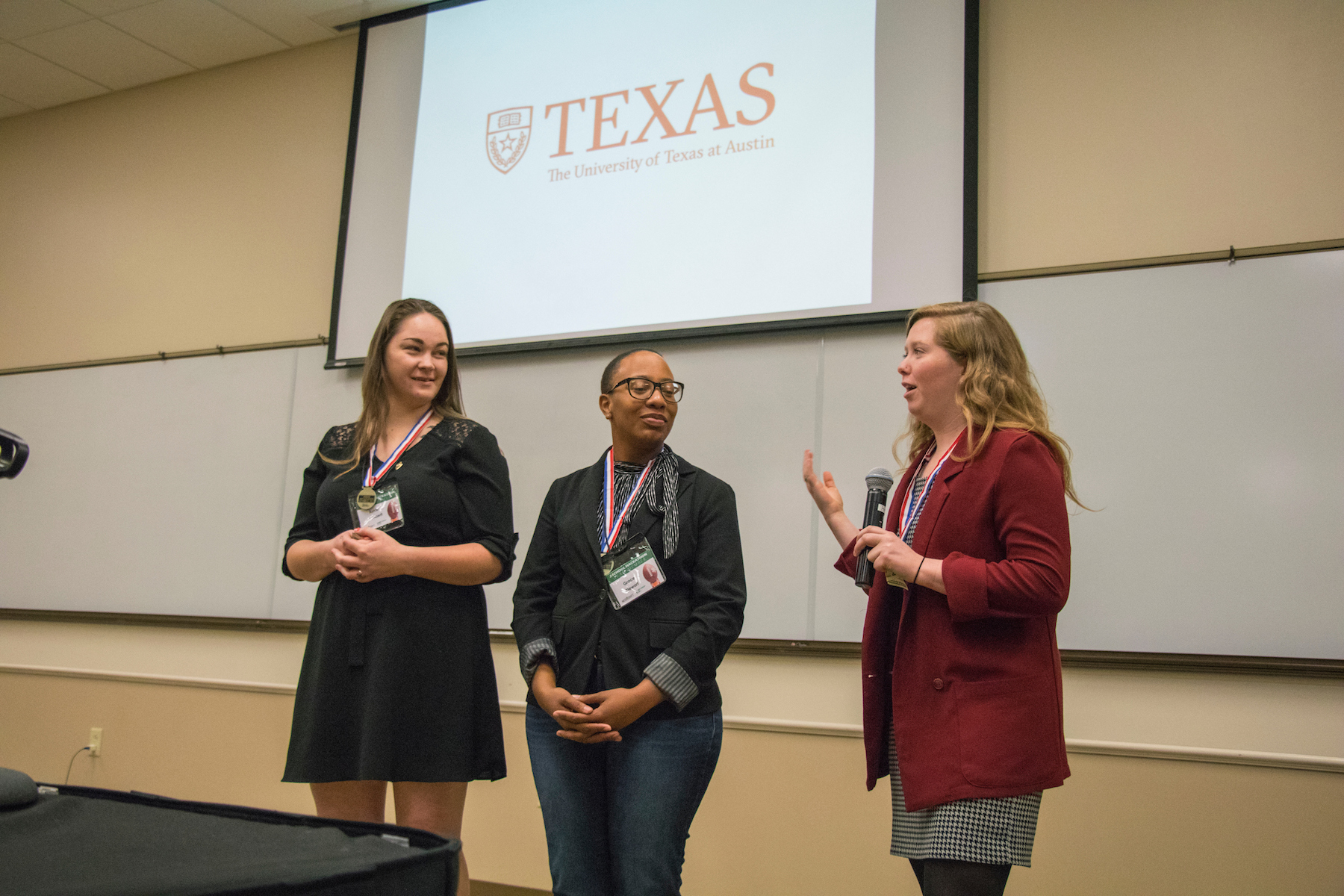 After 36 hours of chaos, lack of sleep and constant worry about whether my group would finish, I can now say I understand the need for Hackathons.

When I applied for a scholarship to take part in the Journalism School Hackathon at University of North Texas on Oct. 20, I did so because I was encouraged by one of my professors. Throughout the Hackathon, I gained a great deal of knowledge and many memories were made. The memories are currently some of the fondest I have of my college experience.

As a mother, a full-time student, and an aspiring journalist, words cannot explain how important this experience was for me.

I am a mother and a nontraditional student. I originally was going for nursing and worked in the medical field for six years as a certified nursing assistant before I realized I was meant for something else.

When I purchased my ticket, I realized my skills from my past would help me take part in the health portion of the experience.

The first night was mainly a mixer to get to know one another, since the students came from all over the U.S. Unfortunately, I did not make it due to being directionally challenged. But it gave me a leg up on everyone else because I got a good night’s rest before the chaos that took place the next day.

On day two of the Hackathon, we were all greeted by breakfast and smiling faces of those running the event. I had the luxury of meeting with some amazing people from the University of North Texas, and speakers like Regina Presley, Retha Hill and Mike Orren. Then we were sent off to start the race in the Hackaton.

Honestly, I was at a loss at what I was about to take part in. As I got with my team, Team Stethoscope, I learned we needed to create a website, application or product that incorporates health or sports. This was truly where my journey began in the Hackathon.

My teammates, Emily Scott from Temple University and Grace Stewart from Bennett College, and I looked at four ideas. The first idea was based on the life-saving anti-overdose drug Narcan and how to help people find it. We ran into the issue of an app already existing, as well as a potential legal issue because people need to be licensed to administer the drug.

The second was an app that consolidated all of a person’s medical records to help with moving, tracking medicines, tracking surgeries and providing medical information to doctors. Yet again, there was both an app and a website to do all this.

The third idea was an app for nurses that would help them monitor their patients when they are not in the room. Sadly, there was already an app for this and the cost would be to great to create a better one.

Our fourth idea came after we realized the others wouldn’t be possible. We began to discuss issues that a majority of people see in life. We came up with two things: the inability to access affordable food, and childhood obesity on the rise. This is where we began seeing a possibility. We wanted to create HealthDragon, a game for kids to learn about healthy food.

HealthDragon had two major purposes. The first was to help children learn to make healthy food choices through an alter ego in the form of a dragon, who must conquer specific obstacles to receive perks through eating healthy foods. If the dragon ate poorly, it would become slow and have difficulty completing quests.

The second purpose was to show parents the choices their children were making, and to give them tips on helping their children eat better in real life. It also provided coupons, healthy recipes, and useful exercises for families.

The nuts and bolts

Once we decided what we were going to create, my team had to come up with a pitch that included costs, marketing, revenue and how we wanted the platforms to run. As a journalist I had to jump out of my comfort zone and help figure out how much this app would cost realistically.

I was shocked to find out that the app would cost from $39,000 to $44,000 for creation. This did not include the cost of employees or any other expenses. Because we were tasked to base our app on a freemium model, we decided in-app purchases were a must. However we also knew that we wanted to appeal to the lower income families as well.

We began calling as many people as possible. We talked to a low-income family of six and discussed how the app would work. Both parents agreed that they would let their children use the app, but anything over $0.99 would potentially be too expensive for them.

We then decided that this app had to progress with or without user’s in-game purchases, which allowed us to look into potential grants and even advertising. We already knew we wanted local stores in every city and state to cooperate with the app to provide coupons, so advertising was the next step.

We even took a drive to Albertson’s down the road to see what they thought and how we might go about working with grocers. They were helpful in the sense that they said they liked the app, but we would have to speak to someone at the corporate level to see about advertising or even cooperation.

In the end we were proud of the work we accomplished. It could potentially become an actual application that parents of any class can use. I was not sure if we were actually going to win. I was worried after listening to Mike Orren say that it should be simple when you pitch the app.

This led to me wonder if we could present in five minutes. This sounds like cake but honestly five minutes fly when you are trying to sell something to others.

As I watched the judges look through the rundown we provided I wondered: did we make it easy to understand? I was nervous about being questioned on the app because I knew we could go off on tangents about other pieces we wanted to incorporate later on.

The most nerve-racking part of the whole thing was listening as they called out the honorable mentions and the winner. The two that were honorable mentions I thought were top notch and would take home the gold, so when they said “HealthDragon” (our app) was the winner, I couldn’t help saying, “What?”

During this entire process our team did really well together. We all had leader-like personalities, which clashed maybe once or twice, but we realized that finishing was a goal that we all had. We also are from different backgrounds, but this I think helped us move forward and find what we needed.

As a mother, a full-time student, and an aspiring journalist, words cannot explain how important this experience was for me. I know that I can do anything I set my mind to, but actually seeing positive repercussions from my work is new to me.

I cannot thank those that ran the Hackathon, nor my partners, enough for the opportunity. And I must say that I couldn’t have done this without the support of my husband and family as well as the push that professor Samuel Ebersole gave me.

Ashley Schaerfl is originally from New Mexico and is a mother of three. After two years as a Certified Nursing Assistant, she decided to follow her true passion: journalism. She is currently in her senior year at Colorado State University-Pueblo, getting a bachelors in Mass Communication. She is the editor of the university paper, the CSU-Pueblo Today.