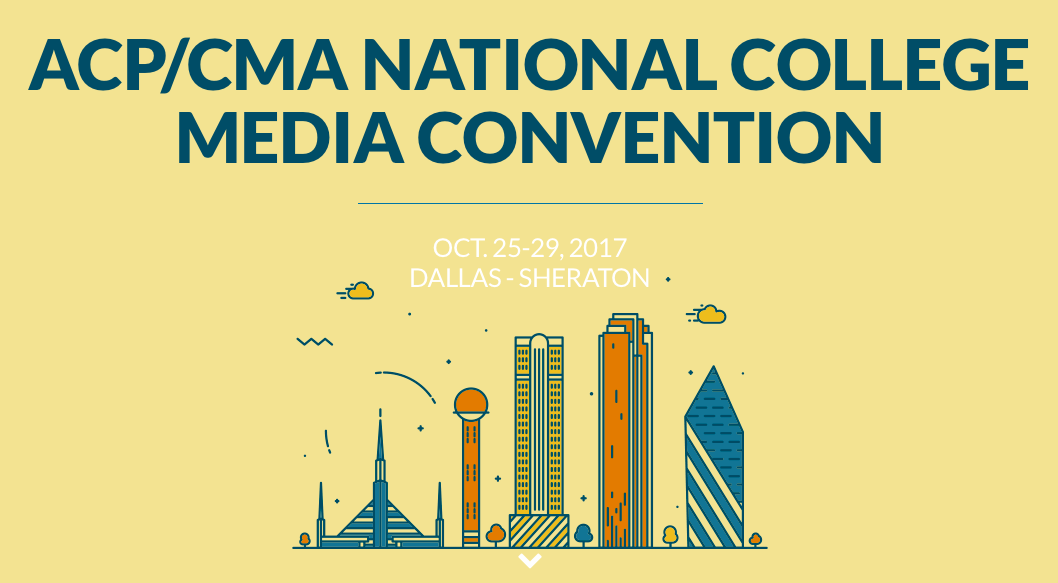 Although more tried-and-true themes were also part of the schedule of sessions – from yearbook page design to good reporting skills – a number of sessions spoke to the increasing digital nature of college media during the five-day event.

“Create opportunities to do cross-platform work. It’s the exposure or even requirement to do something outside of their comfort zone that means everything.” -- Steve Fidel, Brigham Young University

Noting that Pepperdine Graphic Media’s transition to a digital-first newsroom was challenging, Director Elizabeth Smith also said the effort was worth it, as students now think digitally at their small, private university, yielding a new way to do journalism.

The key aspects of their transition included a fully combined staff, stories published on digital platforms before printed ones, an increase in updates for online content, a large push for social on three platforms (from which 60 to 70 percent of their traffic comes), a remodel of their web product, and an addition of a weekly digital newsletter.

This digital focus has changed much about the process of news for the college media staff, according to four of the top editors.

Four editors with Pepperdine Graphic Media, a digital-first college media, speak about their transition from a print to digital focus at the ACP/CMA convention in Dallas. (Photo: Amanda Bright)

Deadlines have changed from one daily deadline to “as soon as possible after the event,” Executive Editor Cassandra Stephenson said.  She said holding college media writers to such a tight schedule can be challenging, but several on the panel noted this mindset switch has paid dividends in volume of content.

The rotating deadlines are facilitated by a Google spreadsheet, which Stephenson called “a living document” that’s updated daily. The perpetual grind has meant a rapid, but still thorough, editing process that is now directed toward the digital product, instead of the printed one.

The staff also found that instead of posting full PDFs of their printed publication online, it was more effective to break the content of the magazines or newspapers up into individual digital products posted with additional materials, something like a behind-the-scenes video.

Getting ‘Into’ the Story with Google

VR, AR, 360 and drones are terms seeping into college media programs, according to the Society of Professional Journalists’ Sandra Gonzalez. After her professional career and now in cooperation with Google News Lab, she encourages college journalists to engage in the digital frontier of visuals with simple tools.

“The possibilities of 360 are so numerous, and I want to get you guys thinking about ways that you can do this,” she said to the college media staff members and advisers.

During the session, Gonzalez led students through examples using 360 technologies and an app called Story Spheres, which embeds audio in a 360 photo for an interactive graphic experience, where viewers can mouse-over yellow circles to hear audio at a specific location.

Then, she encouraged students to practice the capture of 360 using their own phones, which for many college media staff members in the room was a new experience. The demo of the room was created using the Google Street View app, then viewed through a Google News Lab kit that turned into VR goggles.

Advisers of college media get a chance to view 360 images through a Google News Lab kit as they learn about its applications to college media. (Photo: Amanda Bright)

Student journalists give 360 video a try using the Google Street View app during a session on Google tools at the CMA fall conference. (Photo: Amanda Bright)

Michael Currie of the Fort-Worth Star Telegram challenged student media staffs and advisers to think digitally at his session – through both web-based and mobile platforms.

Subheads are a “print invention that works well on digital,” and he sees them as one way to create access points for readers in a digital environment. For headline writing, Currie said he strives to create a “curiosity gap” so those online and on social are continually clicking.

Regarding visuals, Currie recommended embedding Google Maps to give readers a sense of place in a digital story. When telling a story that is enterprise or long-form, Currie recommended breaking up text with photos and photo slideshows, again with the goal of engagement.

Currie’s interactive suggestions included Playbuzz, a service that allows for polls and quizzes to both engage the audience and create interaction with topics, like the best burgers in town or the best books to read. Readers can also see real-time results. Infogr.am was a recommendation for building both infographics and entire articles that are interactive and clickable, so readers will stay longer on pages. A Knight Lab tool, along with more well known TimelineJS and Soundcite, StoryMapJS creates visual ways to tell stories that don’t involve coding. It is free as a third-party, web-based option, particularly for those staffs with more limited resources.

His other trick for web stickiness was linking, which can be used both internally – for previous, related stories by a student media staff – and externally – for additional information or content. Although most designers think of hyperlinks or inline links, materials from other sources, whether images, video, or the like, can also be linked for a more engaging reader experience and longer time on page. PDF documents, particularly those that relate to the reporting of a story like court documents or interview notes, can also be used as links to increase interest.

In order to give college media staffs insight into the pivot happening in a professional newsroom, Robyn Tomlin, the vice president and managing editor of The Dallas Morning News shared her staff’s transition to digital-first.

“When people ask me if I’m optimistic about the future of journalism, my answer is an emphatic yes,” Tomlin said, but she also noted that progress also comes with a price and a host of challenges.

“How do we get from here to there?” she asked the advisers and college students. “Where our digital gains outweigh our print losses?”

Although the question was rhetorical, Tomlin offered an answer: the future success of journalism, for local news in particular, would be based on recommitting to core values and trust with the audience.

Robyn Tomlin, vice president and managing editor of The Dallas Morning News, presents the vision that set her publication on a digital-first trajectory two years ago. (Photo: Amanda Bright)

The first mandate was for “big, bold, dramatic change,” and Tomlin said due to the vision cast in May 2015 by Mike Wilson, better online work only raised the quality of the print edition.

An analysis of the content, capabilities and organization/workflow led to the main tenets of the digital-first conversion:

As part of their digital transition, approximately half of The Dallas Morning News’ staff ended up in a new job description. (Photo: Amanda Bright)

Audience-first more than digital-first became a driving philosophy, according to Tomlin, and they relied on a “data whisperer” for contextual analytics that allowed them to serve the interests of their readers, as well as forge greater trust. Public meetings, Reddit AMAs (“Ask Me Anything”), Facebook Live, Hearken, crowd-sourcing through Google Forms, and a private Facebook group are all tools the Dallas News is now using to invite the community to be part of their journalistic process.

What does this all mean for journalism educators?

It was a demystified view into what is occurring in professional digital media, which provided insight for college instructors who are working to prepare students for this future.

In her closing thoughts, Tomlin said to sustain public service journalism, all media need to build relationships with audiences – more than words and pictures on a page – but an invitation to readers into the process to give them a voice. This can happen in the fourth-largest American city like Dallas, but also in small towns and campuses across the country.

Holly Wise, lecturer at Texas State University and part of the Solutions Journalism Network, declared that her session, although not about the latest technology or gadget, was about innovation – with journalistic content.

“Our work can have a direct impact on communities,” she said of the approach to reporting, but she did caution against disproportionate claims, future predictions, and advocacy, which she said are not what Solutions Journalism is about.

The point of Solutions Journalism, Wise said, is looking at the “H” – the how – instead of only focusing on what and why. Not all stories can be Solutions Journalism, but some lend themselves to the concept. An example is a Chattanooga Times Free Press seven-part series about poverty and its possible answers in that city.

She argued audiences can be more “receptive and attentive” when journalism exposes evidence of what’s being done about a problem, instead of just identifying that the problem exists. She pointed out that young people are increasingly interested in this type of journalism, noting analytics that suggested higher views and shares for that demographic.

Holly Wise of Texas State University speaks about the growing interest in Solutions Journalism among young people and how it could be implemented in college media. (Photo: Amanda Bright)

Wise outlined steps college journalists can take to embark on Solutions Journalism: identification of an issue or question of concern, exploration of what’s missing from the public conversation about that issue, a search for solutions by asking “Who’s doing it better?”, and a thorough gathering of evidence in addition to traditional reporting measures. These steps, Wise said, take stories in a different direction.

She mentioned the project “Covering Addiction” at Temple University among others, where college students were given months or even a whole semester to work through the creation of a Solutions Journalism story or series.

Specifically for college media, she suggested a few ways to start the practice of Solutions Journalism in newsrooms:

“We grow weary of the problem narrative, and we, ourselves, need to flip the frame and get inspired,” Wise said.

In a nod to the changing nature of journalism programs, Steve Fidel of Brigham Young University addressed the obstacles of convergence with simplicity. Convergence in journalism, he said, is essentially a mixing of tribes – print, broadcast, radio, online. Although there are many challenges with this type of human behavior, there are also some strong practices that can bring unity.

Culture and brand are key considerations when converging because of personal investment, Fidel asserted, but also because there is a deep-seeded fear that one tribe could become obsolete. Fidel said the differences in pacing and culture between types of journalism are important to acknowledge as a pre-cursor to full convergence, and he recommended teams involving individuals from each “tribe” be taken on reporting trips often.

Relationships are also essential for the success of a converged news media, from deans through staff members, Fidel said, as he’s seen at his university and in his professional career. Shared space that yields collaborative projects was his recommendation for all student media.

“Create opportunities to do cross-platform work,” Fidel said. “It’s the exposure or even requirement to do something outside of their comfort zone that means everything.”

Fidel asserted much of the work of convergence has more to do with people and place than journalism, but if journalism educators address this tribal nature, perhaps even eliminate the term “convergence” from the lexicon, students can build bridges and possibly adopt a new tribe with more success.

To see more from the convention, take a look at #collegemedia17 on Twitter.

Amanda Bright is a former professional journalist who later spent a decade as a scholastic journalism adviser. Currently, Bright is the Education Editor for MediaShift, a journalism instructor and adviser at Eastern Illinois University and the Media Content Coordinator for Indiana State University Online; she also serves as the Social Media Director and Web Co-Administrator for the Illinois Journalism Education Association.