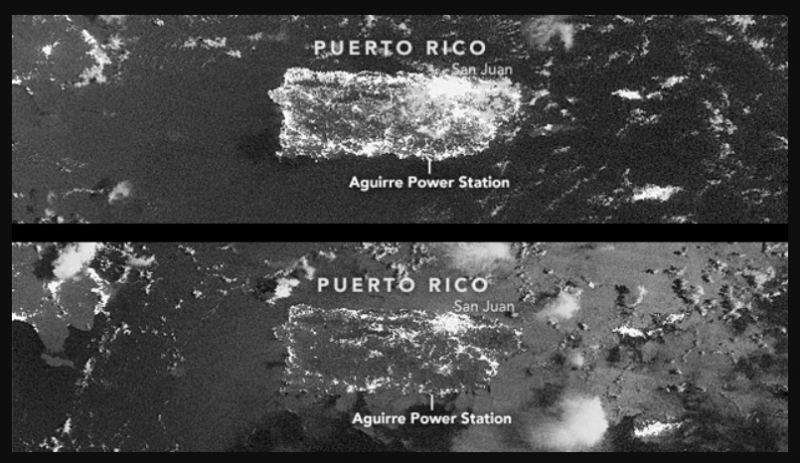 Satellite imagery of Puerto Rico, before and after a blackout in 2016. Images by National Aviation and Space Administration, licensed to public domain.

As societies across the globe grow increasingly dependent on mobile networks for everything from entertainment to emergency services, a sudden communication blackout — whether accidental or intentional — can swiftly disrupt daily life and leave people cut off from critical services like medical care.

This week, two populations on opposite sides of the globe are facing communication shutdowns amid rapidly worsening humanitarian crises.

More than a week after Hurricane Maria pummeled Puerto Rico, bringing the worst storm damage that the Caribbean island has seen in nearly a century, 70% of telecommunications networks are still inoperable and nearly all homes are reportedly still without electricity

Alongside life-threatening shortages of food, water and passable roadways, this has left the majority of Puerto Ricans unable to communicate by phone or mobile networks, or even to charge mobile phones or computers. Along with phone lines and mobile phone towers, a major fiber optic internet cable was so badly damaged from flooding that it shut down altogether.

The cable, which was working at 25 percent of its normal capacity by September 23, provides the underlying digital communication infrastructure for hospitals, police and fire departments and government agencies.

Residents of San Juan are rationing power from generators and other power-generating devices, such as car batteries. As part of relief efforts, telecommunication providers have set up temporary WiFi hotspots in urban areas and sent satellites over the island to facilitate communication. Visit this page to support recovery efforts.

The Rohingya. Photo courtesy United to End Genocide on Flickr and used with Creative Commons license.

Nearly 15,000 kilometers away from San Juan, authorities in Bangladesh this week placed a ban on the sale of mobile phone SIM cards to Rohingya refugees, citing ‘security concerns’. Companies, shops and even individuals who violate the ban have been threatened with fines.

The ban compounds the challenges facing nearly 430,000 refugees who have sought refuge in Bangladesh after fleeing military ‘clearance operations’ that have destroyed more than one hundred Rohingya villages in Myanmar’s Rakhine state. Violence began with clashes between the military and the Arakan Rohingya Salvation Army militant group. Bangladeshi officials explained that their security concerns arose from rumors that there were militants among the hundreds of thousands of refugees (most of whom are children) who have crossed the border in recent weeks.

The country’s telecommunications authority said it will lift the ban once biometric identity cards — which have become a requirement for Bangladeshis seeking SIM cards — are issued to the refugees, but this process could take up to six months.

Tens of thousands of refugees are living without shelter in camps near Bangladesh’s border with Myanmar and are suffering from shortages of food, water, medicine and now, a lack of basic communication tools.

With the next Communist Party Congress taking place in October, China’s Cyberspace Administration issued major fines to national tech companies Baidu, Tencent and Sina, saying that the companies had failed to adequately control online pornography, images of violence and messages promoting ethnic hatred. Although the companies were reportedly assessed with maximum fines under the law, this might amount just 500,000 yuan (about USD $76,000) — a tiny fraction of their annual revenues, which number in the tens of billions.

Saudi Arabia opens up some messaging services (but not WhatsApp)

Saudi Arabia eased restrictions on the use of VoIP and messaging applications, but maintained its ban on WhatsApp and Viber. The government first began blocking the apps in 2013, and explained the changes follow “modern trends” that “operators in the kingdom should follow.” Saudi users can now make calls using apps including LINE, Snapchat, FaceTime, Skype, Telegram and Tango.

Russian news agencies say local authorities will block Facebook next year unless the company begins storing the personal data of Russian citizens on servers in Russia, a move that will make it easier for Russian authorities to obtain citizens’ social media data. Communications regulatory agency Roskomnadzor blocked access to LinkedIn last November following a court ruling that found the company guilty of violating Russian data storage laws. Twitter told Roskomnadzor it aims to localize the personal data of Russian users by the middle of 2018.

Moroccan journalist Hamid El Mahdoui began a hunger strike in protest of an unfair trial after a court of appeals increased his prison sentence from three months to one year. Mahdoui was arrested and charged for giving a speech that authorities say incited others to participate in a July protest and break the law, even though the right to protest and assembly is guaranteed under the Moroccan Constitution and the Law on Public Assemblies.

In mid-September, developers launched a new source tool that aims to curb online abuse in Pakistan. The app, known as Muavin, allows users to create groups of allies on Twitter and Facebook so that they may securely alert each other when they experience harassment.