How Google AdSense and Brands Continue to Fund Extremist Websites 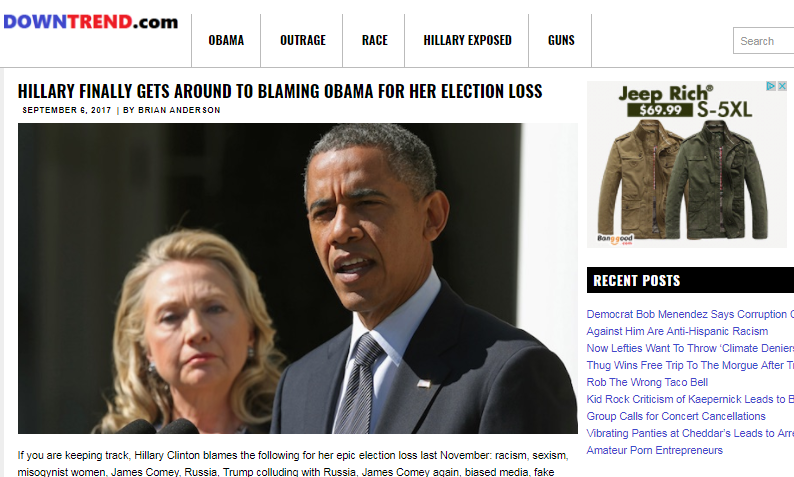 This post originally appeared on Medium, and is written by the CEO and founder of Storyzy, which tracks fake news and extremist websites.

Google is funding extremist and fake news sites through AdSense, its platform dedicated to publishers, despite its own policies. This is because it only removes ads at the page level. Analyzing the 700+ fake news sites* on its automated blacklist, Storyzy found that 90% of those using programmatic ads are affiliated with Google AdSense.

If you are a brand and you do not want to create revenue for extremist and fake news sites, perhaps the only solution is to blacklist the whole site.

One of the main reasons for the presence of ads on extremist and fake news sites is the fact that Google removes ads only from certain pages, not from a whole site. In a post from May 2017, Google announced that from then on, it would remove ads from pages that violate its policies. They were explicit that this would be carried out at the page level and not at the site level. Scott Spencer, Google’s sustainable ads director, explained:

“As we roll out page-level policy action as the new default for content violations, we’ll be able to stop showing ads on select pages, while leaving ads up on the rest of a site’s good content.”

In concrete terms, a given brand’s ads may have been removed from pages with racist content on an extremist site but still appear in its weather forecast section, meaning that Google and the brand are providing revenue to such sites. So it is not a surprise that, in September 2017, 90% of fake news sites which are monetizing their audience through programmatic advertising are using Google AdSense (according to Storyzy statistics). Their audience represents 120 million monthly visits.

Google AdSense policies about “dangerous or derogatory content” are clear and they are applicable at the page level:

“We believe strongly in freedom of expression, but we don’t permit monetization of dangerous or derogatory content.”

However, when a brand’s ads appear on specific “safe” pages of an extremist site because those specific pages do not violate Google policies, the brand is still funding both the extremist site and Google.

It is public knowledge that Breitbart.com has been blacklisted by nearly 2,600 brands since November 2016 (that applies to the entire site, not only specific pages). Not all content on the site is extremist, racist, or contains false information. These brands removed their ads despite the fact they could appear alongside articles from respectable agencies like the Associated Press. For example, in the screen shot below you can see an AP article on Breitbart that has been blacklisted by these brands.

So what is the best approach for a brand? Removing ads from the entire site, or just from certain pages? Nearly 2,600 brands chose the first option, probably because they do not want to fund Breitbart. So if you are a brand and you do not want to create revenue for extremist and fake news sites, perhaps the only solution is to blacklist the whole site and not only its pages that violate Google AdSense policies.

To be fair, Google says it can sometimes remove an entire site. However, we have noticed that 90% of extremist and fake news sites are running programmatic display ads, including Breitbart, which are still affiliated with Adsense.

If brands want to control their ad placement, they cannot rely only on Google. They should additionally use a real-time dynamic blacklist of sites where they do not want their ads to appear. This will provide a real-time update, which is necessary because sites are emerging, changing their domain name, disappearing and coming live again all the time. For example, thanks to our algorithms at Storyzy, we detected this week that the neo-Nazi site The Daily Stormer has become live again under another domain name. In addition, an automated blacklist is run by algorithms that are politically neutral.