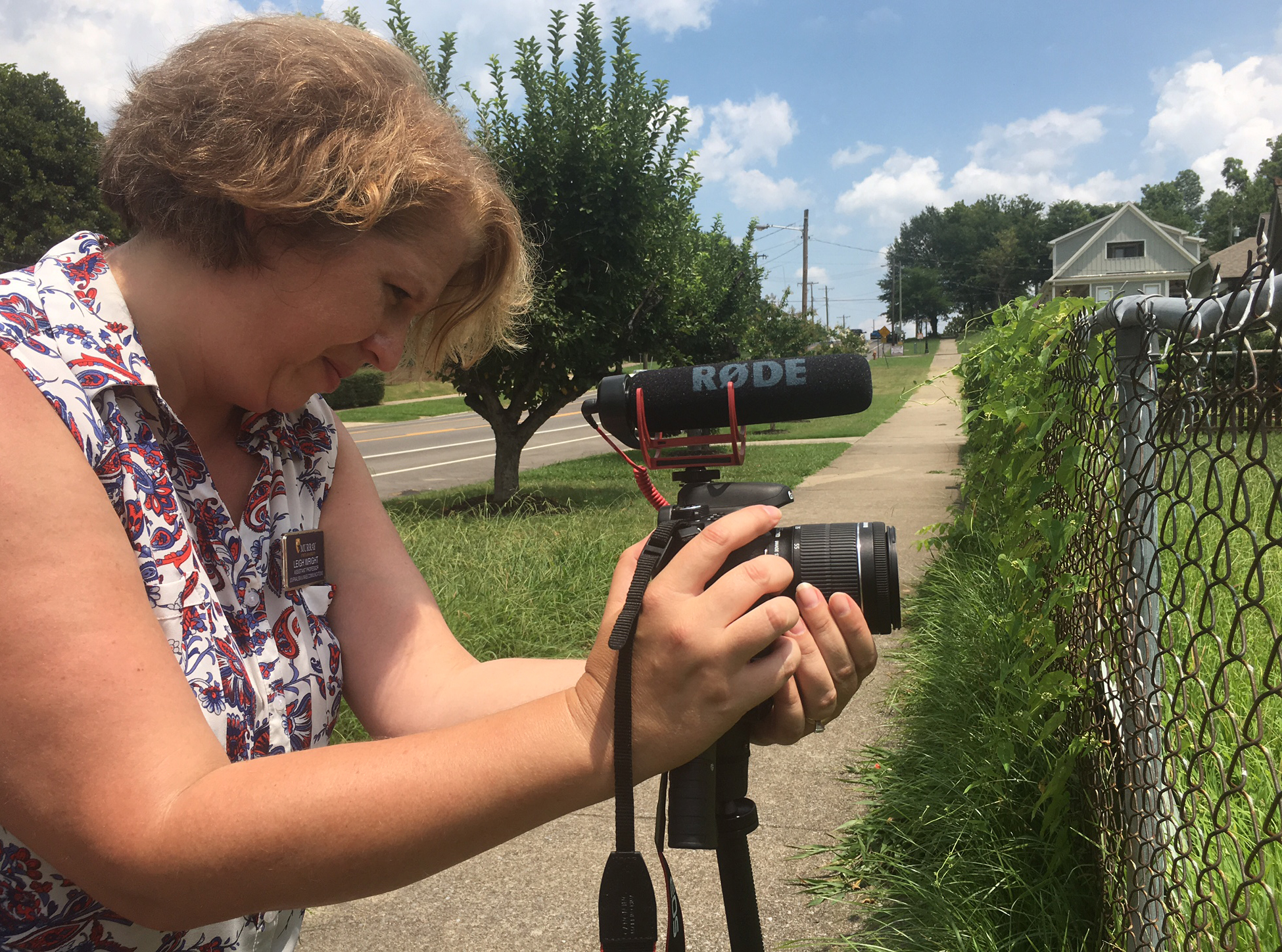 Leigh Landini Wright adjusts the focus on her DSLR while shooting a story about an unusual house in Nashville, Tennessee.

When students return to classrooms from their internships, they bring back new ideas and new skills. It’s the same for professors who choose to return to a newsroom for part of their summer.

This summer marked the second time that I have returned to a newsroom since leaving in 2009 to finish my graduate degree and begin teaching. Of course, back in 2009, the Kentucky newspaper newsroom in which I worked had not yet figured out how to use social media in reporting, and our multimedia efforts could be classified as meager at best. Now in 2017, every newsroom on every platform uses both social media and multimedia.

Most nights after I finished my shift, I worked through ways I could incorporate the tasks I did into my lesson plans, from building a collaborative culture to producing a one-minute morning show multimedia package on deadline.

In 2014, I joined five other journalism educators from across the country who were selected as visiting professors in social media through AEJMC and Scripps Howard. I spent two weeks with the staff of the TCPalm.com and its three newspapers on the Atlantic coast of Florida and practiced how to use social media in reporting and writing. That program allowed a journalist from TCPalm.com to come to my campus in Kentucky and show our students the social and digital media skills they needed.

This summer, I completed a three-week internship at WTVF-NewsChannel 5 Network in Nashville, Tennessee through the National Association of Television Production Executives program. The NATPE program provides funding for professors to immerse themselves in the television industry for two to four weeks in the summer.

For faculty, new technology adds something new that we have to learn every year, or really every minute, to teach our students. Those of us on tenure tracks must also produce research or creative projects in addition to service. These other obligations often leave very little time for professional development.

Most nights after I finished my shift at WTVF-Newschannel 5, I worked through ways that I could incorporate the tasks I did into my lesson plans. These things ranged from the little things, like building a collaborative culture, to major things like turning a one-minute morning show multimedia package on deadline to the continued push for innovation in digital and social media.

For instance, the producers started their morning meeting by walking around the table and grooving to music from one of their phones. Those steps not only got in some much-needed exercise, they provided an invigorating atmosphere to get the work day started. I plan to use that technique with my classes, especially those early in the morning, because it created a great culture. Eight years removed from my own newsroom experience, these are the little things that I have forgotten that can help students build a better working environment.

The best part of my experience came from actually getting out there with the reporters, photographers and multimedia journalists. As the professionals shot their packages, I shot alongside them, wrote my own scripts, voiced my own work and then edited it on deadline. Plus, I wrote my own web stories and even shot a Facebook promotional video for another journalist’s story. Reporters and photographers were gracious about sharing their feedback to help me improve my skills and in turn, this feedback can be used to show my students the value of continuing to learn and improve outside the classroom.

Wright and Murray State alumna Amy Watson, morning anchor for NewsChannel 5 in Nashville, look over a script inside the newsroom.

Although programs like AEJMC/Scripps and NATPE provide a structure to place educators back in newsrooms, professors can rely on their own connections or their past experience.

Simon Perez, an associate professor of broadcast and digital journalism at the Newhouse School of Syracuse University, returns every summer to KPIX in San Francisco to report as a multimedia journalist for two weeks.
“I have more credibility in the classroom,” Perez said. “I know students will listen more intently when I start with; ‘Last summer, when I covered …’ The end-of-semester student reviews uniformly show they appreciate having a professor who still does it.”

Perez brought back his scripts, raw videos and airchecks for his packages and then used them in the classroom. By doing this, the students learn with actual news footage rather than something from a website or textbook. Like Perez, I brought back scripts, packages, VO/SOTs, social media videos and social media posts to use in my multimedia classes this fall.

During my time at NewsChannel 5, I learned how to use CrowdTangle, a social media monitoring service, and I’ve developed lessons for my classes as a result. My time spent with the digital and social production teams showed me that students have to understand how to write and report on social media, and they absolutely have to know how to use analytics for content creation strategy.

Besides bringing back materials for the classroom, the immersion allows professors to remember the challenges of working in the field. Among the things I encountered: Excessive heat warnings (it’s Nashville in the summer where the humidity turns the air into air you can wear), a lawn that had not seen a mower in weeks that we had to traipse through to get inside an abandoned house, and the logistics of finding a parking spot in a crowded city. These may seem like trivial matters to some, but try to cart your gear in a 106-degree heat index up a hill. I had blocked many of these logistics of reporting from my memory.

“I have a better understanding of the difficulty of what it is I’m asking the students to do,” Perez agreed. “Lugging a camera and tripod around in the snow/heat, being told ‘no’ all day, having interview subjects cancel at the last minute, watching batteries expire at the most inopportune moments, seeing the computer crash during editing – it all happens to me just as it happens to them.

“I’m more empathetic and encouraging, but I remain consistently demanding.”

Perez also said his experiences every summer remind him about the steps an experienced journalist takes for granted such as placing a microphone on an interview subject, and so he demonstrates that skill to students.

To that end, Perez turned his experiences into a blog from which he pulls materials for course readings in his TV reporting class.

Wright set up her own MMJ station inside the newsroom. (Photo: Leigh Landini Wright)

I didn’t keep a blog, but I did shoot a series of interviews and b-roll with reporters, photographers, digital producers, producers, associate producers and anchors. By doing this, I practiced my skills with shooting and editing, and I’ve created class material that should engage students more than a traditional textbook.

No matter whether it’s a national program such as NATPE or AEJMC/Scripps Howard, journalism professors have to remain current with this ever-changing industry. After seeing the value with completing two successful “internships” through national programs, I plan to do my own program like Perez has done. Whether it’s a newspaper, TV or radio newsroom, the experience of gearing up and getting out there provides valuable experience for us and for our students. We haven’t even started the semester yet, and I’m already thinking ahead to next summer and multimedia projects I can produce for a local outlet.

Leigh Landini Wright is an assistant professor of journalism and head of the journalism sequence at Murray State University in Kentucky. Prior to teaching, Wright worked as a newspaper reporter and editor for 16 years in far western Kentucky. Her research focuses on best practices of social and digital media in the newsroom and in the classroom.