Every J-School Should Teach Data, and Here’s How 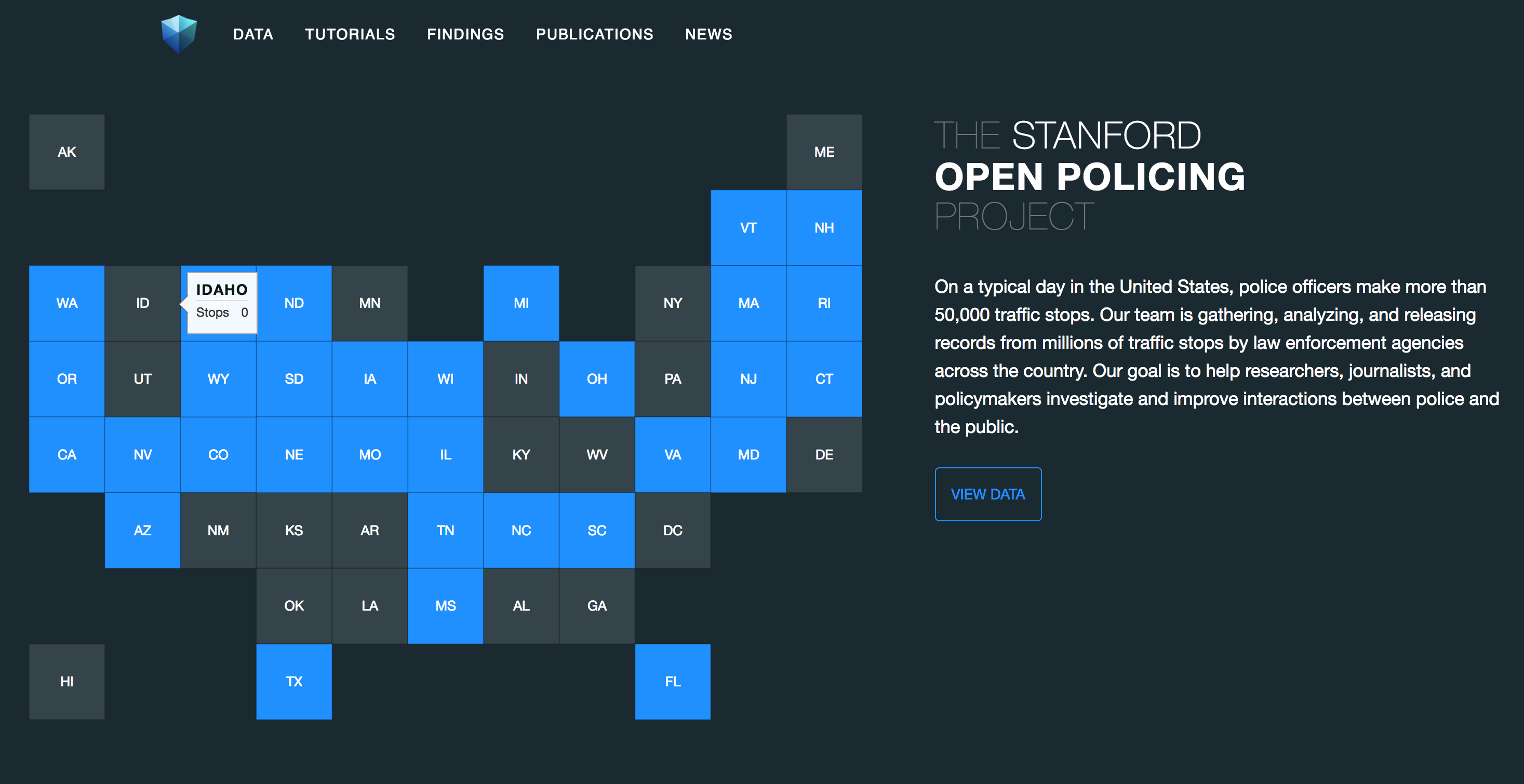 The Stanford Computational Journalism Lab and the Engineering School received Knight Funding and together launched the Stanford Open Policing Project.

Data journalism education is becoming more robust across all sizes and types of schools, from Columbia to Texas State and from Northwestern to University of Florida. At the University of Texas-Arlington, a commuter school, a tenured professor taught herself how to use spreadsheets just so she could teach her students data journalism.

The reason is simple. Everything is data — words, numbers, maps, you name it. And understanding how to manage and analyze information has always been vital for reporters and editors. The stories we need to tell as journalists are complex and data journalism gives us the tools we need. Just look at the Atlanta Journal Constitution’s recent investigation into abuse by doctors as an example.

Even schools that don’t have separate programs can incorporate data as a basic journalism skill that enables reporters, editors, graphic designers and others to do their jobs better.

About a year and a half ago I co-published a report on the state of data journalism education as part of a research project by Columbia University as it explored how to plan for including the field in a more robust way.

The report stated that most journalism programs don’t teach a single class on data journalism. Even for schools that do teach data journalism, the basics are usually what is offered — think spreadsheets — not algorithms. Just a handful of schools (fewer than 10) had focused on data journalism in a big way, meaning multiple courses and offering courses that introduced programming or machine learning.

Even schools that don’t have separate programs can incorporate data as a basic journalism skill that enables reporters, editors, graphic designers and others to do their jobs better. Here are some ideas for how that might be done, no matter a program’s size.

We ask students to know how to write a lede, a nutgraf, shoot a decent photo and edit video. We also should equip students with the ability to analyze a city budget, or pull down Census data and calculate a per capita rate. Learning how to analyze data for journalism is a different thing than taking a finance class, or a mandatory statistics class. Journalism instruction using data helps students to understand how they can evaluate original information themselves, and that helps them ask better questions as reporters.

The goal with an intro class isn’t necessarily to learn how to code. It’s to learn how to report and tell more effective stories using basic data analysis skills, something that should be a cornerstone for journalism.

Reporting and writing classes or public accountability reporting classes can be tailored to include data journalism.

When I teach my reporting and writing course at Stanford every fall, I include a two-week session on finding data online and on analyzing data using a spreadsheet. I’ve built a tutorial using lobbying data, but there are plenty of other freely available tutorials.

ASU Prof. Steve Doig recommends using a module approach with a contained data-set and some pre-set nuggets that can be easily discovered.

Don’t teach software; teach critical thinking. Provide the tutorials for students to complete outside class. Provide a brief hands-on Q & A session in class for those who ran into trouble. Then, use the class to discuss possible stories in the data and help students identify what makes a story.

Data journalism should be all about the story. We should use all of the skills at hand to tell the best story we can. So when we teach a class on research for journalists, include how to find data and how to scrape it. When we teach business journalism, teach students how to analyze that budget, or evaluate stock prices over time. For feature reporting, do an analysis of nonprofit tax data, or analyze Census data for a feature on a changing community.

Ben Welsh, the LA Times DataDesk Editor recently completed a MOOC for the Knight Center, using California campaign finance data. In a month, he taught 2,800 people how to use Python to analyze the data for possible stories. Ben also came to my class at Stanford and provided an abbreviated version of the same course last winter. His week boosted my students to a new level of abilities – both in tech skills and that all-important critical thinking. Seek out experts who might be willing to collaborate with you for similar lesson opportunities, or just use the materials created and made available by Ben to teach Python yourself. Professors at Northwestern and San Diego State have already adapted the class.

If the journalism schools reach out to others on their campuses, they may find a willing audience plus opportunities for collaboration that can push academic innovation and research.

Two years ago when I came to Stanford, I gave my students a data negotiation assignment: request and collect public data for every state patrol that collects information during traffic stops. I knew the data was worth a story — I had done one on the Washington State Patrols’ track record in stopping and searching minorities back in 2004.

But collecting that data from multiple states (31 so far) and putting it into one repository hadn’t been done before. That level of data (130 million records so far) yielded interest from a colleague in Stanford’s School of Engineering. The Stanford Computational Journalism Lab and the Engineering School received Knight Funding and together launched the Stanford Open Policing Project.

The journalism students had a real-world assignment in negotiation for public records and data to analyze for stories. Our cohorts in the engineering school were able to develop a new statistical test for measuring possible discrimination in traffic stops. All of the data has been released to the public and we held a workshop just for journalists at the IRE conference in June.

This may seem far afield from the topic of a data journalism curriculum, but actually it’s on point. Academics want to do research and they want to innovate. Collaboration in the fields of data science and journalism will make this possible. That in turn can result in more challenging and advanced coursework for students, such as learning how to analyze data using the R programming language and think more critically about how to weigh the statistical methods to use in journalistic coverage.

These are the skills that will help students innovate as they launch their careers, even as those careers change over time.

Cheryl Phillips is the Lorry I. Lokey Visiting Professor in Professional Journalism at Stanford University and a member of the Stanford Computational Journalism Lab, which aims to reduce the cost of accountability journalism and foster the use of computational methods to tell stories that would otherwise go untold. She previously worked at The Seattle Times and has twice been a part of Pulitzer Prizes for breaking news. She is a former president of Investigative Reporters and Editors.