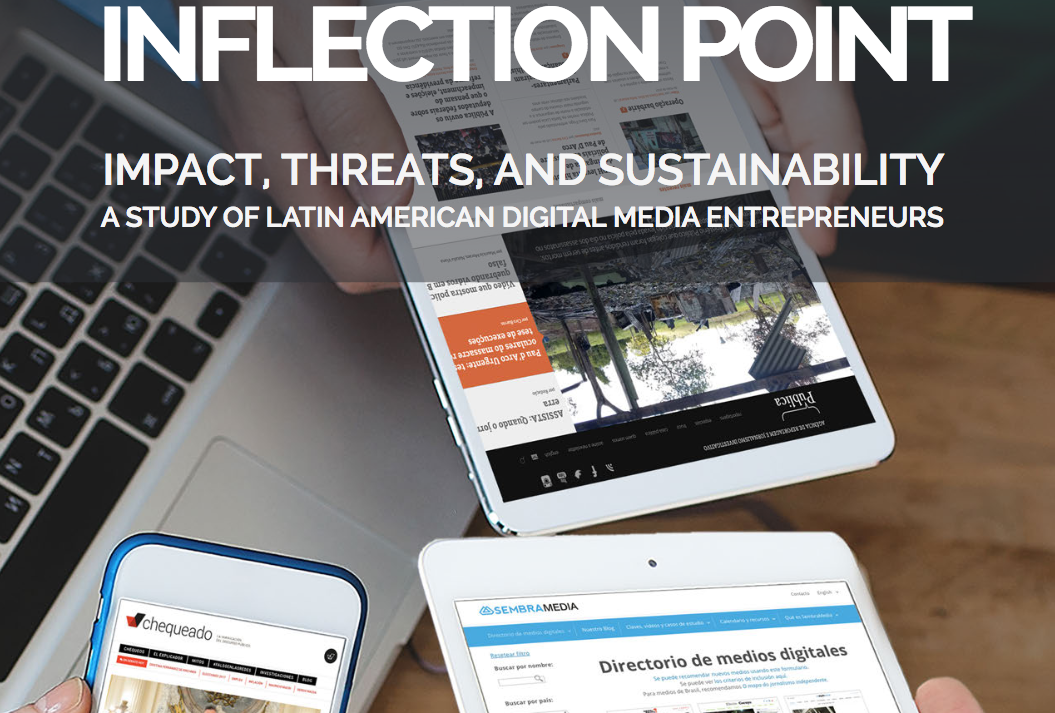 This post is the executive summary from SembraMedia’s recent research report, Inflection Point, on the impact, threats, and sustainability of digital media entrepreneurs in Latin America. The report was made possible by support from Omidyar Network. The summary is reposted here with permission.

Digital media entrepreneurs are serving an increasingly important role in Latin America. Since the first venture in this study was launched in 1998, hundreds of digital natives have appeared in the region and grown to serve millions of readers.

This study is the first comprehensive examination of the impact these entrepreneurs are having, the risks they face, and whether a viable business model has emerged for quality, independent, digital journalism. To conduct this research, SembraMedia, with the support of Omidyar Network, commissioned a team to study 100 digital news startups, 25 each in Argentina, Brazil, Colombia and Mexico.

Many of the researchers were entrepreneurial journalists themselves, and they brought personal connections and a deep understanding of the media in their countries. In 2-hour interviews with founders or directors, they asked more than 130 questions about management and innovation, challenges and opportunities, audience size and engagement, income and expenses.

This report is aimed at helping the founders of digital media startups better understand the trends, threats, and best practices that affect them. It is also designed to help investors, foundations, and journalism organizations to appreciate the value, vulnerability, and impact of this fast-growing media ecosystem. Although we cannot share their proprietary data, we’ve included our top-level findings in this report.

The main finding of this study is that digital media entrepreneurs are deeply transforming the way that journalism is conducted and consumed in Latin America.

They are not just producing news — they are generators of change, promoting better laws, defending human rights, exposing corruption, and fighting abuses of power.

They are driven to produce independent news in countries that are highly politically polarized — and some of them are paying a high price for it.

Luis Cardona of Pie de Página in Mexico spent months covering the disappearances of 15 low-level workers in the drug trade only to be kidnapped and tortured himself.

Cardona, and the artist Rapé, dramatized the story in an animated video published on YouTube. Both have had to flee their hometowns because of death threats.

Nearly half the journalists interviewed for this study reported threats and physical attacks in response to their coverage. More than 20% of the founders and directors we interviewed admitted that they avoided covering certain topics, people, and institutions because of threats and intimidation.

Others face punitive lawsuits, cyber-attacks, never-ending audits, and the loss of advertising revenues in retaliation for their coverage.

Digital natives in Latin America have an even more important role to play than their counterparts in the over-saturated media markets of the developed world.

News ownership is highly concentrated in these countries, and government advertising is frequently used to reward compliant media outlets.

Digital natives are building sustainable (and even profitable) businesses

Even in the face of these legal, financial, and physical threats, entrepreneurial journalists are building sustainable businesses around quality journalism.

The advent of social media and easy-to-use web design tools has made it possible to launch a digital media venture almost entirely on sweat equity.

More than 70% of the ventures in this study started with less than $10,000, and more than 10% of those now bring in at least a half million dollars a year in revenues.

Diversified revenue is key to success

Diversified revenue was key to success, especially in the mid tiers, and we found more than 15 distinct revenue sources, including events, training, membership, crowdfunding, and native advertising.

More than 65% reported they were earning revenue in at least three ways.

In the top tier, where audiences reach more than 20 million visits per month, advertising is the top revenue source, but not the only one. In the mid ranges, there is no dominant business model and diversified revenue sources that combine advertising with audience-driven sources, such as events and crowdfunding, are crucial for sustainability.

When we analyzed the lower tiers, we found lots of opportunities for improvement. Despite their dedication to quality journalism, more than 30% brought in less than $10,000 in total revenues in 2016.

Broadly speaking, we found two paths to growing these businesses: building audience to drive traffic and advertising, or leveraging the loyalty of the audience to inspire micro-donations and the 15 other ways they are making money.

These paths are not mutually exclusive.

For many of these journalists-turned-entrepreneurs their greatest strength – their drive to produce great journalism – is also their greatest weakness, blinding them to the bottom line.

The majority underinvest in sales and marketing, even when they have high enough traffic to drive significant ad revenue.

Many complain they don’t have the money to hire sales staff, but the ones who do, are reaping the benefits.

When we compared the median revenues of those who do have sales staff with those that don’t, the difference was dramatic. Those with at least one sales person reported more than $117,000 in annual revenues; those with no sales staff reported less than $3,900.

Record numbers of women are going around the glass ceiling

Of the 100 digital natives we studied, 62% had at least one woman among the founders. Women also play a significant role in the executive and management teams.

In the context of Latin America, where traditional media is dominated by men, this finding is even more significant.

From training citizen journalists, to crowd-voicing, digital media entrepreneurs are extending the way we produce and consume news.

Many of the innovative ideas in this study were fueled by the closeness of these journalists to the audiences they serve.

We share the insights and suggestions in this report with the goal of helping this vibrant community of digital media startups evolve into an even more robust ecosystem.

The full report is available in English, Spanish, and Portuguese at data.sembramedia.org.

Janine Warner is an International Center for Journalists Knight Fellow and the co-founder and executive director of SembraMedia, a nonprofit dedicated to supporting Spanish-language entrepreneurial journalists. Janine launched SembraMedia after working with thousands of journalists throughout Latin America. She has also taught online courses in entrepreneurial journalism for the Knight Center for Journalism in the Americas at the University of Texas.