This is Why Online Harassment Still Needs Attention 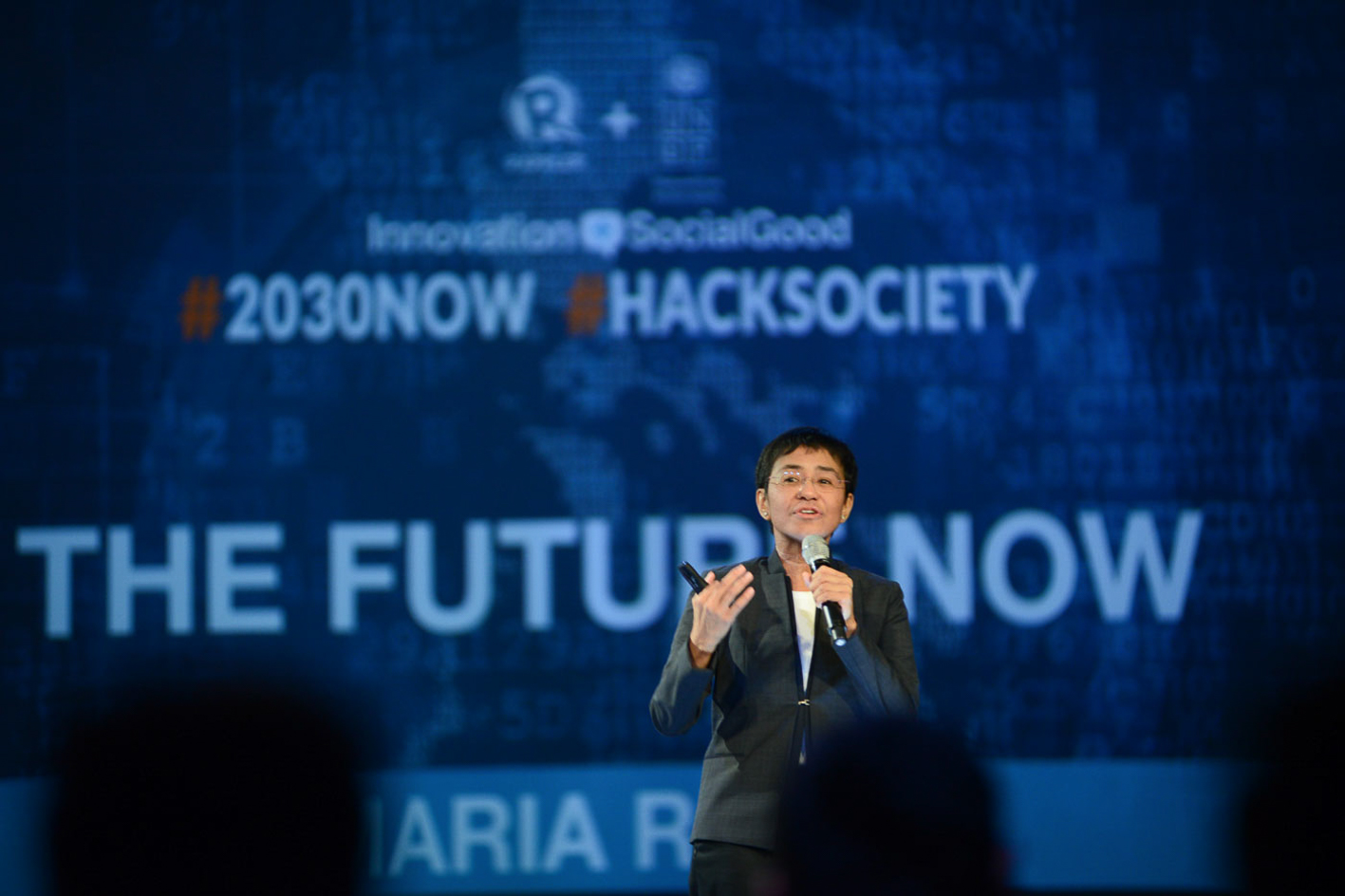 Maria Ressa is a former CNN war correspondent but none of her experiences in the field prepared her for the massive and destructive campaign of gendered online harassment that’s been directed at her since 2016. “I’ve been called ugly, a dog, a snake, threatened with rape and murder,” she says. How many times has she received online death threats? She’s lost count. “Gosh, there have been so many!”

A journalist with over 30 years experience, Ressa is the founding CEO and Executive Editor of the successful social media-powered news organisation Rappler, based in the Philippines.

In addition to being threatened with rape and murder, she’s been the subject of hashtag campaigns like #ArrestMariaRessa and #BringHerToTheSenate, designed to whip up online mobs into attack mode, discredit both Ressa and Rappler, and chill their reporting.

Every journalist in the country reporting independently on the Duterte presidency is subjected to rampant and highly coordinated online abuse, she says. Especially if they’re female.

“It began a spiral of silence. Anyone who was critical or asked questions about extrajudicial killings was attacked, brutally attacked. The women got it worst,” she says. “And we’ve realised that the system is set-up to silence dissent – designed to make journalists docile. We’re not supposed to be asking hard questions, and we’re certainly not supposed to be critical.”

This onslaught represents a very real threat to the psychological, digital, and even the physical safety of journalists, she adds. But she refuses to be cowed by online armies of “super trolls”, whom she believes are part of a campaign to destabilize democracy in the Philippines. She admits that the constant attacks do make her think twice about doing stories that will be lightning rods for attacks. “But then I go and do the story even harder! I Just refuse to let intimidation win.”

Investigative journalism as a weapon in the fight back

Her responses to the threats include investigative reporting on the intertwined problems of online harassment, disinformation and misinformation. She believes in “throwing sunlight” on the abusers. But after Rappler published a feature series mapping the corrosive impacts of organized political ‘trolling’ on the Philippines in October 2016, the onslaught of abuse and threats of violence escalated dramatically.

The series deployed ‘big data’ analysis techniques to establish that a ‘sock puppet network’ of 26 fake Facebook accounts was influencing nearly three million other Philippines-based accounts. Behind the ‘sock puppets’ were three “super trolls”, as Ressa describes them. Their aim was to seed disinformation and foment targeted attacks. “They would plant messages within groups, inflaming the groups who would then become a mob to attack the target,” she says.

In the days following publication of the Rappler series titled ‘Propaganda War: Weaponising the Internet’, she received on average 90 hate messages an hour. Among these was what she describes as the first “credible death threat” against her.

The messages continued for months. “It happened so fast and at such frequency, I didn’t realise how unnatural it was”, she says. The effect was to mute the seriousness of the threats in her mind initially. “I really struggled with what’s real, what’s not. How do I respond, should I respond?” These are familiar questions for journalists and editors struggling to combat the impacts of online harassment.

But speaking up and speaking out brings protection through awareness, Ressa believes.

Asking loyal audiences to help with the fightback

In early 2017, Ressa received another threat that stunned her. It was the kind of threat that women journalists are increasingly familiar with internationally: a call for her to be gang raped and murdered. A young man wrote on Rappler’s Facebook page:

“I want Maria Ressa to be raped repeatedly to death, I would be so happy if that happens when martial law is declared, it would bring joy to my heart.”

Ressa responded like a digital journalist who understands the power of audiences. She asked her online communities to assist in identifying the threat-maker, who was using a Facebook account in a fake name. They came through. With her supporters’ help, Ressa was able to identify the man as a 22 year old university student. When his university learned of his activities, he was forced to call Ressa and apologize.

Then, in the middle of an online storm triggered by a deliberately misleading report on a fake news site that misquoted Ressa, active and former members of the Philippines military piled on with abuse and threats. Again, she activated her own online communities in response, and one ‘netizen’ wrote an open letter to the chief of the Armed Forces of the Philippines, General Eduardo Ano, asking him to intervene.

Again, this activation of her networks worked. General Ano was upset by the incident, ordered an investigation and issued an official apology: “We publicly apologize to Miss Maria Ressa for the emotional pain, anxiety, and humiliation those irresponsible comments and unkind remarks might have caused her,” he wrote.

Tightening security on and offline in response to cyber harassment

As Ressa began to realize, online threats to harm a journalist, or incite others to harm a journalist, must be taken seriously. They can’t just be dealt with by blocking, muting, reporting, deleting and ignoring, because: “You don’t know when it will jump out from the virtual world and sneak into the physical world.”

In response, Ressa decided to upgrade security in Rappler’s newsrooms and provide protection for the journalists facing the worst of the online attacks. “It’s crossed the line where I do worry about safety. When you have people getting killed every night in the drug war and you have these online threats, you have no choice as a responsible corporation but to increase security for the people who work for you.”

In parallel, she strengthened digital safety defenses. But while providing psychological support, she hasn’t removed her journalists from reporting duty, nor has she sent them out of the country. And she’s keeping her legal options open. The sheer number of attacks means that it’s not possible to follow through on each one, Ressa says. But Rappler is recording every online threat and storing the data for possible future legal action. “We’ve put in place protocols for how we deal with online threats. We’re looking at potential ways to hold the offenders accountable. This impunity that exists shouldn’t be this way. We need solutions.”

Ressa’s public Facebook page is the target of about 2,000 “ugly” comments every day, she explains.

“The propaganda machine uses it to incite anger and then we have to deal with real people who believe this stuff. So, that takes a lot of time”, she says. “It’s like playing whack-a-mole.”

She rejects the idea that the onus is on journalists to police the platforms by constantly reporting problems: “Block, mute, report…when you get so many of these it just takes up so much time. There’s not enough time in the day. We also have jobs to do.”

While she recognizes the enormity of the challenge confronting Facebook, Ressa is adamant that the only way forward is for the social media giant to take responsibility for the problem and accept its role as a news publisher.

So, she’s begun publicly advocating for Facebook to step up. She’s also gone directly to the company with data demonstrating the size of the problem.

In the immediate short term, “the only group that has the power to restore some sense of order and civility is Facebook…To not do anything is an abdication of responsibility.”

Emotional and psychological impacts must be taken seriously

Women journalists are often told to “toughen up” or “grow a thicker skin”, and that’s a common response to those who experience gendered online harassment. But the cumulative effect of constant derision – frequently received via the intimate device of a mobile phone – must be recognized, Maria Ressa says.

Not just because the damage includes well-documented impacts on emotional and psychological well-being, but also censorship and erosion of trust.

“They attack your physicality, your sexuality. When you are denigrated, and stripped of dignity in this way, how can you maintain your credibility? All of these things work together for a single purpose and that’s to prevent journalists from doing their jobs,” Ressa says.

She’s been shocked at the level of the attacks and offered counselling and support to affected Rappler journalists, along with the social media team on the frontline of the battle, because: “I don’t want our people going home with this.”

Ressa also seeks to support others who are suffering online abuse but may not be as empowered as Rappler staff.

“We come together to help each other through it. We know what’s going on – it’s being done to intimidate us. We galvanize each other. And I think we’ll get through it,” she says. “I’m an optimist and I think we’re being forged by fire and we’ll emerge stronger.”

Maria Ressa’s story features in a new book about threats to journalism safety published by UNESCO and launched at a UN conference in Geneva last week.