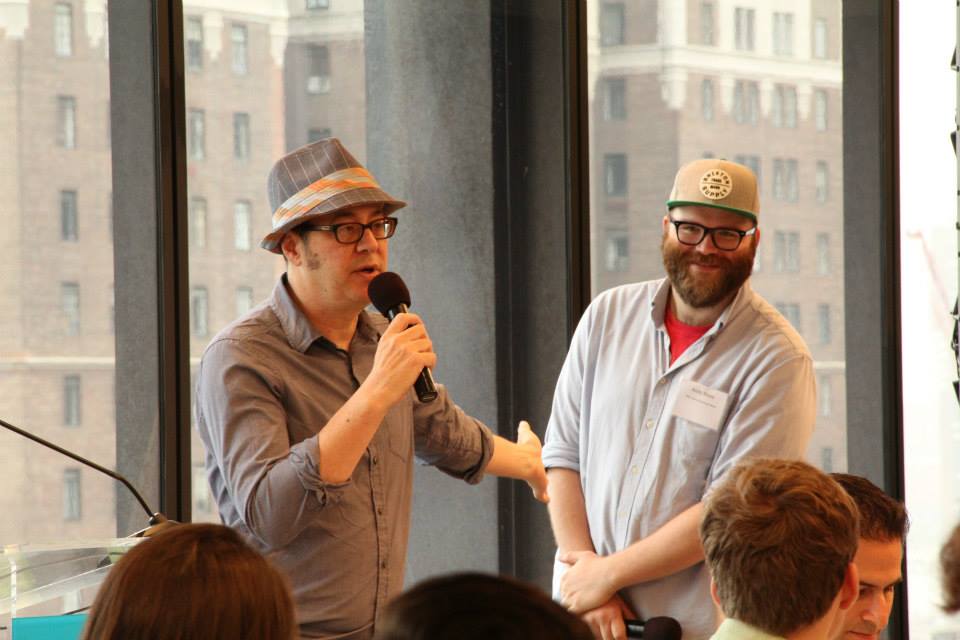 Mark Glaser (left) and Andy Boyle at the last Collab/Space New York event. Andy joined the podcast this week to talk about his new book.

In the news this week, the New York Times is eliminating a layer of editorial oversight, including its Public Editor job, leading to an outcry among critics. The Times also announced its smashing success with email newsletters, doubling subscribers in the past 3 years. Germany has a love-hate relationship with Facebook, with so many online Germans using the social network, but politicians are incensed about hate speech and fake news there. Sports analyst Bill Simmons moves his site The Ringer from Medium to Vox Media — will more publishers follow? Our Metric of the Week is Instagram Organic Reach, and we speak with author Andy Boyle, a journalist, programmer and comedian, whose funny advice book for millennials is called Adulthood for Beginners.

"Having awesome tweets, that's great but I also think you're speaking to the exact same people who have been reading you in the last couple years on Twitter." -- Andy Boyle on media Twitter

Andy Boyle is a writer, comedian and web developer, who has a new book out called Adulthood for Beginners. His work, including a viral piece about giving up drinking, has been in Esquire, The TODAY Show, Chicago Tribune, Boston Globe, and The New York Times Regional Media Group, where it was cited in the 2012 Pulitzer Prize for Breaking News. He’s currently the Director of Platform Architecture at Axios, a new media startup. And he also was our “improv guy” at various Collab/Space workshops produced by MediaShift.

Today marks the last day for Elizabeth Spayd as the public editor of the New York Times. It’s also the last day — for the foreseeable future — of the public editor role at the Times. That announcement was made on Wednesday, along with a move to offer buyouts mainly to editors to cut back on an editorial layer for stories. It would be easy to say that management was just following the advice of its 2020 report the Times had commissioned before, but it’s not just that. The Times is also on a hiring binge for reporters due to its huge digital subscription gains. Cutting the Public Editor might have been a function of Spayd not being very popular inside or outside the newsroom.

The Times tried to soften the blow with a new “Reader Center” that offers more reader involvement in reporting and story ideas — but not the strong hand of a public editor. Many critics were upset with the move, with former public editor Margaret Sullivan saying that a public editor can really hold the paper’s feet to the fire and get an answer from management. As for losing an editorial layer, it’s true that most traditional newsrooms have cut the two or three layers of editorial oversight down to one or two, and native digital publications keep things pretty streamlined. But Rick Edmonds of Poynter told the Times that “I think there is a level of scrutiny and quality control that’s kind of disappearing.” On a positive note, the Times also reported that its newsletter subscriptions have doubled in the last three years to more than 13 million. Newsletter readers are twice as likely to become paying subscribers according to the Times, and they send out 50 newsletters at least weekly, with seven that are sent for marketing. As the Times shuffles the deck, it will be interesting to see if less editing — and a weaker public watchdog role — will change the dynamic of the newsroom and its relationship with readers.

Germany currently has a love/hate relationship with Facebook — especially when it comes to the German government. A recent study by German public media found that just half of online Germans use social media at all, way behind other European countries. But the ones that do use social media largely are on Facebook — 85% — with growing use of Instagram and WhatsApp as well. Snapchat has launched more recently in Germany, and is lagging behind Instagram. Meanwhile, the German government is pushing back against fake news and hate speech on Facebook and other social platforms with a proposed law that would fine the site up to 50 million Euros for not taking down that material fast enough.

While the social giant would like to work with the German government and local authorities to help squelch fake news and hate speech, they weren’t happy with the massive fines in the law. In a statement, Facebook said that: “The draft law provides an incentive to delete content that is not clearly illegal when social networks face such a disproportionate threat of fines.” Facebook believes that the law would not be compliant with the German constitution or European laws. Facebook is hiring 700 moderators in Berlin to remove hate speech and fake news as the elections approach in September. But according to German newspaper reports, the moderators are required to evaluate 2000 posts a day, some including violent or potentially traumatizing content, for minimum wage with minimal training. While the proposed law does go too far with its massive fines, at least it’s getting the attention of Facebook and other social networks, which are having to adjust accordingly and filter content much more rigorously.

Bill Simmons’ The Ringer Moves from Medium to Vox

Bill Simmons is a sports analyst and podcaster who’s seen his star rise and fall. He started as a sports blogger in Boston, and then became a columnist for ESPN, eventually launching his own boutique site Grantland and a popular podcast. But after getting into trouble with ESPN with his comments on NFL commissioner Roger Goodell, ESPN cut ties with Simmons. His next move was to launch an HBO show called “Any Given Wednesday,” while also starting a site called The Ringer on Medium. The HBO show never got the following of his podcast, and was cancelled. And now his website The Ringer is on the move to Vox Media in a new joint agreement, where The Ringer owns its intellectual property and has its editorial independence, but Vox will runs sales and tech and split those ad revenues.

For Vox, it’s a big move to become a service provider for third-party sites, especially after it’s spent so much time and resources on its own publishing system called Chorus. Vox honcho Jim Bankoff told the Wall Street Journal that they’re open to working with more publishers, but they’ll be selective and want to find those that are consistent with their approach. That might mean a prevalence of sponsored content, as that’s been a big area of interest for Vox and The Ringer. As for Medium, it’s a big blow to the so-called “platisher” (which means a combination of platform and publisher) which decided it wanted to be a platform after all, and not a publisher, but then ditched sponsored content. That led to layoffs and a change in direction toward the subscription model, while leaving many publishers on Medium in a quandary over whether they should stay or go. The Washington Post also has its own publishing system called Arc so it’ll be interesting to see if more publishers like the Post and Vox start considering becoming platforms as well. Platishers aren’t dead yet — they’re just evolving!