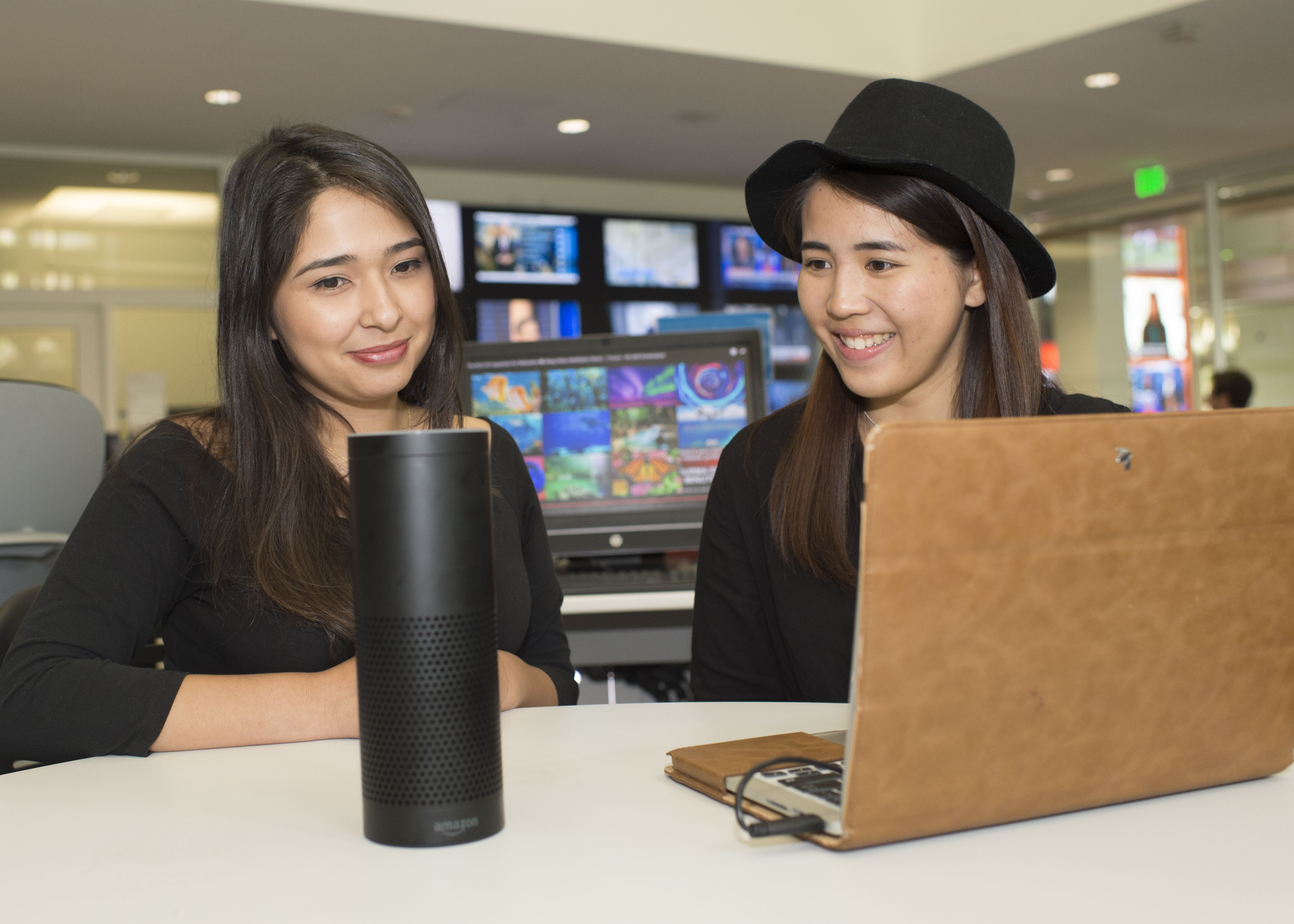 “Alexa, tell me how to make chilaquiles.”

This was one of the conversational commands University of Southern California journalism students programmed when creating a new skill for the Amazon Echo device that uses Alexa voice-powered technology. Chilaquiles is a Mexican dish made with corn tortillas and chili sauce, but this story wasn’t just about a recipe.

The students put themselves in the place of their users and thought Amazon Echo would be an interesting device to experiment with.

The students, Cristina Galvan and Almond Li, were working on a project for the “Advanced Journalism for Mobile and Emerging Platforms” class at USC Annenberg that promotes experimentation with a variety of emerging technology—including mixed reality, augmented reality, chat bots, stories for Alexa, 360 photo and video storytelling, and other new formats that allow journalists to tell stories in different ways.

Cristina and Almond wanted to create stories about food and culture for their semester-long class project. As the professor of the course, I talked with the students about the focus of the story, their goals and their audience. The students put themselves in the place of their users and thought Amazon Echo would be an interesting device to experiment with based on the audience experience they wanted to create.

Beyond a recipe skill, the students wanted to program Alexa to tell a story that a user could experience in his or her kitchen, a common place Alexa-powered devices might be used. In addition to the ingredients and cooking directions, the students built in stories from a Mexican mom who shared what the dish meant to her and how her personal memories affected the preparation of the dish.

These weren’t just the ingredients of a flavorful dish, it was a recipe for a compelling audio story and rich experience for the user. The students had to make adjustments. They had previously worked on audio and video for the web and social media platforms.

“Initially when I was editing the audio I did it as a regular audio piece, but when I started developing it, we looked at it and knew it had to be in real time as if you are in the kitchen with the person,” Galvan said. “It had to be in real time, conversational, fun and something you want to do, not feeling like ‘I’m going to cook with this robot.’ It had to be something that really made you feel like you’re bonding with the person you are listening to.”

The students recorded interviews and blended in natural sound and music for a real-time experience. They wrote a script with narration, interviews, natural sound and user actions with time code. As they developed various parts of the story, the students had to consider how long it would take to cut tortillas, make sauce and cook ingredients.

“A lot of things were really trial and error,” Li said. “The first time we did this we didn’t plan ahead enough. We thought it was going to be easy and that we were just going to [feature] the steps. Then we would insert the story in between the lines, but it was not that easy. We needed to weave things together.”

Once the students had their audio story complete and were satisfied with user experience, we focused on the technical aspects of creating a skill, or command, for Alexa. In preparation for this, I attended (and invited the students to attend) a free day-long workshop on developing Alexa skills in Los Angeles and I also examined a variety of Alexa skills.

I already had an Amazon developer account required to make skills for Alexa, but I also needed to sign up for an Amazon Web Service account. After reviewing the steps for creating an Alexa skill and going through them at the workshop, I had a good understanding of the process. (Side note: I had previous experience developing apps and some coding experience, which really helped).

I went over the process with the students on how to create the Alexa skill and also sent them a guide to get started. But even as the project was being finalized, Alexa developments, including a new interface, continued.

We submitted the skill and it came back with a few bugs, which we are currently fixing, but you can listen to the students’ story on SoundCloud for now.

“There was a lot of help and guidelines, but one of the hardest thing is that it hasn’t been done as much before so there wasn’t a lot of videos and tutorials,” Galvan said. Even with some challenges, it was really fun to work with the students as they created a story for Alexa.

The project helped the students develop an innovative and flexible mindset when it comes to creating stories for emerging platforms and we are looking forward to experimenting more with Alexa and other voice-powered devices next year, in addition to other forms of emerging technology. At the end of the semester, the students got to present their projects to members of Facebook’s product development team for feedback on the last day of class.

“I think it was really cool and interesting to just get to explore these new platforms. For myself, I was just used to doing video and text and it was really an interesting experience learning how to do something for an emerging platform,” Galvan said.

We’ve already requested a Google Home device and more Echo devices for the next school year and will also explore how controlling lights and other devices in the home can enhance storytelling.

So for now, “Alexa, get ready for more stories.”

Amara Aguilar is an associate professor of professional practice in digital journalism at the University of Southern California Annenberg School of Communication and Journalism. She teaches courses in mobile and emerging platforms, social media, design, digital news project development, among other areas. She loves journalism, Star Wars and all things tech.