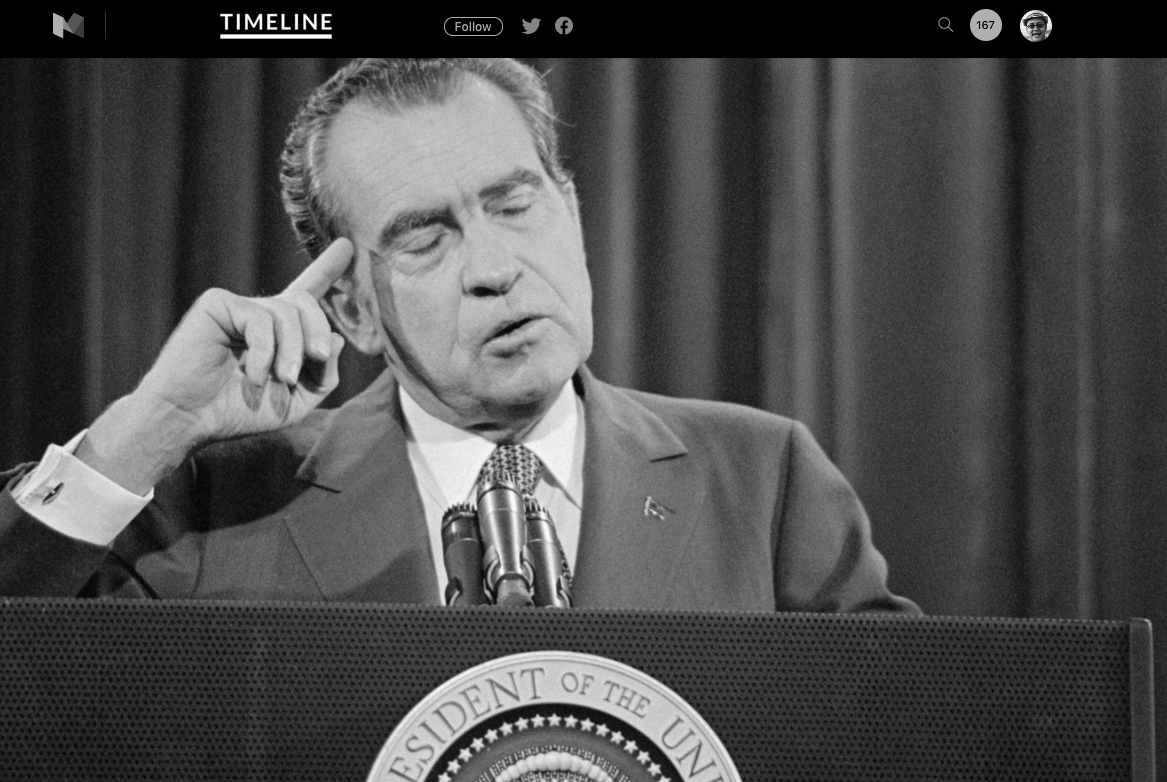 Timeline looked back at the "Saturday Night Massacre" by Richard Nixon in 1973 to give context to James Comey's recent firing.

In the news this week, the New York Times and Wall Street Journal announce big jumps in paid digital subscribers, while Disney suffers as ESPN loses more subscribers. Snapchat’s parent company Snap Inc. announces its first quarterly earnings, and no matter how you filter or snap it, the news is bad with $2.2 billion in losses. But the company is making inroads with advertisers, with a self-service ad tool and more metrics and tracking. Need another skinny bundle? Hulu unveiled its Live TV offering with 50 channels for $40 a month along with its on-demand and original shows. Our Metric of the Week is LinkedIn Metrics and we speak with Jim Giles, CEO of Timeline, a media startup that’s seeing big demand for its archival videos of black history and female empowerment.

"The media environment is really, really hard and all of us... are going to rely, to some extent, on direct contribution from our audience to survive." -Jim Giles

Jim Giles is CEO of Timeline. In 2015, the company was named one of the apps of the year by Apple, and lauded by the New York Times, Fast Company and others. Before taking over at Timeline, he co-founded Matter in 2013. Previous to Matter, he reported on science and technology for outlets like the New York Times, The Atlantic, Nature and The Guardian.

The new maxim in the digital era is that subscriptions are going to drive more revenue than ever, while advertising is hurting (and heading to tech platforms). That maxim has been true for national newspapers like the New York Times and Wall Street Journal, but it’s also been a curse for ESPN, which has lost cable subscribers to cord-cutters and people who spend more time on streaming services. Let’s start with the Times, which reported its biggest jump in digital subscribers in its history: 308,000 added in the first quarter of 2017, helping it hit 2.2 million total subscribers. The Times has nearly flipped its ad vs. subscription revenue streams, with subscriptions now making up 61 percent of revenues, while advertising used to account for 63 percent of revenues 20 years ago. It wasn’t all good news for the Times, however, as print revenue was down by 18 percent in the quarter. Meanwhile, the Wall Street Journal reported a similar bump in digital subscriptions — 305,000 — but that was for the entire year, while the Times made a similar gain in just one quarter!

But while many large news organizations and non-profits are seeing huge subscription bumps in the wake of Donald Trump’s presidency, the sports leader ESPN is caught in digital headwinds, losing cable subscription fees at the same time as sports rights are going through the roof. That led to 100 high-profile layoffs at the network, including on-air talent. And when parent company Disney had its recent earnings report, CEO Robert Iger spent most of the call defending the company’s strategy with ESPN. While ESPN has lost about 12 million subscribers over the past 6 years, Iger noted that the station is being included on many new streaming services including the new one from Hulu. He did admit that those wouldn’t make up for the cable losses right away, but figured they would in the long run. There’s also the long missing and long rumored stand-alone ESPN streaming offering, which is incredibly late to the game. Iger knows that sports highlights are everywhere on mobile, and tech companies are moving in on sports rights, so the writing is on the wall for a new business model to support streaming sports that breaks up bundles and offers up more a la carte, on-demand programming.

Snapchat has been in a running battle with Facebook, and specifically Instagram, when it comes to video stories by users. Last year, when Instagram launched Stories that were very similar to Snapchat’s offering, Snapchat started to see user growth slow. Now, that growth has continued to slow as the company announced its first quarterly earnings report as a public company on Wednesday. “Earnings” is probably a bad way to describe the report, as the company lost $2.2 billion in the quarter, mainly due to massive stock compensation related to the IPO, including an $800 million bonus to CEO Evan Spiegel. Daily users were up to 166 million in the quarter, up 36 percent from the year-ago quarter, but that growth is less than the 53 percent growth a year ago. Revenues were also up, but didn’t hit Wall Street expectations, leading the stock to drop more than 20 percent the next day. As to its rivalry with Facebook, which had copied its features, Snapchat honcho Spiegel had this sterling quote on the earnings call: “Just because Yahoo has a search box, it doesn’t mean they’re Google.”

Beyond the earnings report, Snapchat had been making numerous moves to shore up its advertising growth, metrics and tracking. And most importantly, the company launched a self-service tool for small and large marketers to place targeted ads on the app. This is a big play to compete with self-service ads on Facebook, Twitter and other social platforms, but it might be a steep learning curve for smaller businesses. As TechCrunch’s Josh Constine pointed out, “The question will be whether smaller businesses can create compelling video ads for Snapchat’s unique vertical video format and fickle teen audience.” Along with that ad manager, Snapchat will be adding unlimited viewing time and looping videos options to Snaps, making it a little less ephemeral. For advertisers, another big win has been Snapchat’s additional metrics they’ve added for tracking campaigns, including ad viewability, conversions and even app-install performance data. But Adweek’s Lauren Johnson said it was still doubtful that Snapchat would eat into big TV ad budgets anytime soon.

If you think this podcast is becoming a broken record when it comes to live-streaming bundles, you’re right. And that’s because so many players are getting into the skinny bundle game, offering up dozens of live TV channels and lots of on-demand content for a lower price than expanded cable. The latest is from Hulu, with a new offering at $40 a month, which is the most expensive of the offerings like YouTube TV at $35 a month and Sling TV at just $20 a month. But Hulu with Live TV includes 50 channels of live TV and a cloud DVR. The bundle is still missing channels from Viacom, AMC and Discovery. And the list goes on and on as far as its ups and downs. On the upside, the service includes live TV alongside all the on-demand shows on Hulu. On the downside, you’ll have to watch commercials when you use the DVR, which holds 50 hours of shows. Hulu’s service includes tons of extra features like less commercials and more DVR space — for added fees.

But at some point, when you get up to $70-plus per month, it starts to feel like you’re getting back up to the cost of cable or satellite. TechCrunch’s Jordan Crook notes that one difference-maker for Hulu could be its original series, “The Handmaid’s Tale,” which is based on a 1985 book by Margaret Atwood that tells of a dystopian future that’s not too far off from our own present. Crook believes that the show is Hulu’s first “must have” show like HBO’s “Game of Thrones” or Netflix’s “House of Cards.” The Live TV service is still in beta, but it’s already been given rave reviews for its new interface, which tries to recommend shows you’ll like and mixes on-demand shows with live shows — dispensing with any kind of channel guide. That hasn’t sit well with some reviewers who think it’s too difficult to find the channels you want. But in the end, if you want to win the Darwinian battle of skinny bundles, you’ll have to offer the best content and price, and Hulu has a big head-start in content so far.