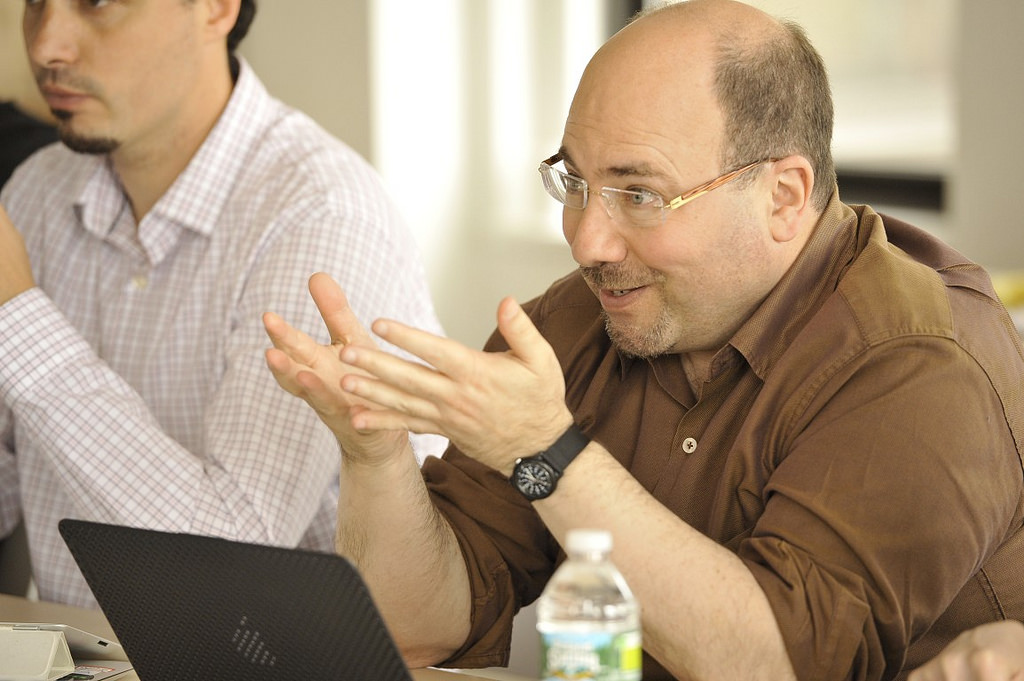 In the news this week, Facebook goes head-first into augmented reality and virtual reality at its F8 conference, but a videotaped murder puts a damper on the party. Former Microsoft CEO Steve Ballmer releases USAFacts, with beautiful visualizations about government data — but will anyone care an age of alternative facts? And the new school goes old school, as video startup Cheddar gives away TV antennas with Dunkin Donuts to entice more millennials to watch. Our Metric of the Week is Facebook Post Reach, and Craigslist founder Craig Newmark talks about his charitable giving and his mission to promote trustworthy journalism.

"A trustworthy press is the immune system of democracy." - Craig Newmark on his efforts to fund quality journalism

Craig Newmark is the founder of craigslist. He serves on the board of directors of the Poynter Foundation, Center for Public Integrity, Sunlight Foundation, and Consumers Union/Consumer Reports. Craig also serves on the Board of Overseers of the Columbia Journalism Review and as an advisor to nearly 20 other renowned non-profit organizations.

Social giant Facebook would love to sell you its future of immersive virtual reality, fun augmented reality, skin that can hear and a brain-machine interface. But before it could describe its vision of the future at the F8 developer conference, Facebook had to deal with its very messy present, including a video of a murder in Cleveland. There’ve been many examples of users uploading heinous videos onto platforms like YouTube and Livestream. But as Facebook has pushed into video and live-streaming there have been multiple suicides, a rape and an attack on a disabled teen on Facebook Live. The suspect in last week’s murder did not live-stream it, contrary to initial reports, though he did confess to the killing afterward on a Facebook live-stream. At F8, CEO Mark Zuckerberg only mentioned the crime briefly saying “We’ll do all we can to prevent tragedies like this from happening.”

Washington Post’s media columnist Margaret Sullivan was one of many critics who lambasted Facebook for continuing to ignore its important role in online discourse and speech. Sullivan wrote that: “At this crucial moment, Facebook’s language often sounds clueless, with its combination of stilted corporate euphemism and childlike wonder about ‘community’ and ‘sharing.’” Just the same, Zuckerberg plowed right into the glitzy keynote speech, focused intensely on augmented reality, where you can see animated objects through your camera lens. The social giant is taking on “lenses” at Snapchat head-on, and trying to build on the popularity of games like Pokemon Go. More interesting for news publishers was Facebook’s attempt to revive chatbots, which was the big hype at last year’s conference. Bots have languished and are hard to find on Messenger, but now they’ll be available in group chats, and let you listen to music as a group, order food, or follow sports scores. And Messenger now has a “Discover” tab to help you find bots. As for the ugliness of the real world, hate speech and fake news, Facebook might not be dealing with a boycott like YouTube is because of ads next to hate speech, but that could happen it doesn’t figure out better ways to filter content with artificial intelligence and humans.

Steve Ballmer Releases a Massive USAFacts Database on the Government

What do you do if you have too much time and money on your hands? If you’re former Microsoft CEO Steve Ballmer you buy the Los Angeles Clippers for $2 billion and start digging into where your tax dollars are being spent. Last Tuesday, the last day to file your taxes, Ballmer released a database and report looking at revenue and spending across federal, state and local government called USAFacts. Ballmer’s team of academics, economists, developers, and designers have been working on the project for the past three years. The $10 million database is live now at USAfacts.org and presents its data in a series of eye-catching visualizations to give lay people a clearer understanding of their findings. Why was Ballmer so obsessed with government data? He was wondering how all his taxes were being spent, and couldn’t find that information in one dependable spot.

While Ballmer won’t take a stand on what the data means and how politicians and media folks will use it, there’s no doubt that politicos of the future will be annotating their work with USAFacts infographics. But the question is whether facts are of much use in our post-truth, fake news-saturated world. The Atlantic’s Derek Thompson called the effort honorable but wrote that “facts alone are feeble things. Given more information, most people don’t change their minds, even when the new data seems to support the opposite argument.” Fun facts he pointed out from the database: fires have declined by 50% since 1980, class sizes have shrunk to 16.1 students, and hospital stays cost 30% more since 2000. So what? While that might not matter to Thompson, there are reporters everywhere who are probably chomping at the bit to use the data for new stories. And just as important, if the database is accepted by folks across the political divide it might end up changing the debates in Washington. But don’t hold your breath.

What do old technology like TV antennas and UHF channels have to do with glitzy video startups? Usually not much, but in the case of Cheddar, a millennial-focused business news service, they’ve gone old school to reach more users by giving away TV antennas so people can watch them on UHF channels in five markets. Cheddar’s the brainchild of former BuzzFeed president Jon Steinberg, who launched the channel last year and has raised $13 million in funding from investors like Comcast. Bloomberg’s Gerry Smith reports that Cheddar reaches 1 million people each day with its live feeds on Facebook and Twitter. It also has a paid version showing 8 hours of programming each day for $2.99 a month, available on Sling TV, Amazon Prime, and its own app. The company is teaming up with Dunkin’ Donuts to give away small TV antennas in the markets where people can find Cheddar on a UHF channel.

Why the big push into old technologies? Steinberg told Bloomberg that they believe broadcast TV homes are rising in the U.S. while pay TV homes are on the down-trend. He said that Cheddar is focused on being “anywhere we can provide a stream,” in other words, trying to be where his audience lives. It’s an important goal for any media company but it’s not so easy to pull off, with channels splintering into skinny bundles and new packages cropping up on YouTube with one from Hulu in the works. As Bloomberg’s Smith points out, digital natives like BuzzFeed have been making moves into traditional TV, so this fits with that trend, especially with a former BuzzFeed exec in charge. But the larger question is whether Cheddar content is really something that will break through with a large audience. Millennials definitely need help learning about business and personal finance, but the shows on Cheddar don’t seem all that different than those at entrenched competitors like CNBC and Bloomberg. We’ll see if the antennas can garner more than just a blip of hype for the startup.