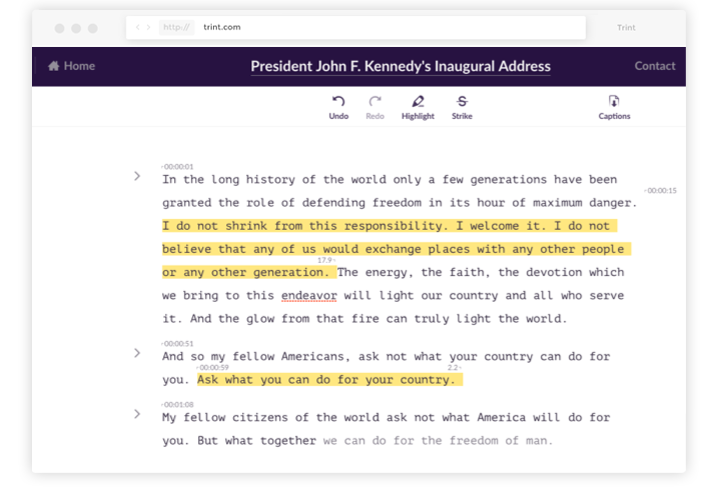 Broadcast journalism veteran Jeff Kofman never envisioned that he would become an entrepreneur. During his extensive career, he covered war in Iraq, revolution in Haiti, drug cartels in Colombia and a coup in Honduras – and won an Emmy for his coverage of the fall of Muamar Gaddafi. But after 30-plus years, he was ready for a new challenge.

Trint co-founder Jeff Kofman covered some of the biggest stories around the world, including the Gulf Oil Spill. Photo courtesy of Trint.

In 2013, while attending Mozfest, a conference modeled around open internet advocacy, Kofman met Laurian Gridinoc and Mark Boas, two developers who were debuting technology that tethered text to audio and allowed the audio to be searchable.

Impressed, Kofman asked if it were possible to add automatic speech recognition – and that’s how Trint was born. Together they founded a startup, which is headquartered in London. (For more on the back-story on Trint, check out this post on Medium.)

Content is usually not just used in one article or broadcast, but will be repackaged for many different platforms – Facebook, Twitter, podcasts, and more – Kofman said. Digital recorders, he said, act as a bottleneck. In a breaking news situation, for example, journalists may be unable to post something quickly to the web because they would need to go back and listen to the recording. Trint, which can transcribe a an audio or video file in minutes, can help address that issue.

It’s designed to be an easy-to-use workflow tool that not only generates transcriptions, but works as a text editor too. Kofman believes it can transform the way journalists work and how quickly they’ll be able to publish stories.

“I’ve spent thousands of hours of my life transcribing interviews, speeches, news conferences,” he said. “In the arc of my 30-plus-year career I’ve watched all of these innovations that would have been unimaginable when I was in my 20s.”

Trint offers a suite of features, including the ability to realign the transcription of a piece of audio or video with the original recording. Screenshot provided by Trint.

Accuracy is crucial in journalism – and audio transcription is notoriously inaccurate. One of Trint’s key features is its built-in editor that it allows the user to easily correct a transcription for complete accuracy.

“This is about having trustworthy transcripts that aren’t going to burn you,” Kofman said.

Trint can also automatically measure the length of any audio excerpt. It can process any standard compressed video or audio format. It’s currently available in English, as well as 12 other languages, and three different English accents. More languages are coming in the future.

Additionally, users can highlight excerpts and play or export just those highlights, a useful tool for an editor.

“Funding Trint in the first round of awards, announced in February 2016, was a natural fit for the spirit of the Fund – a prototype project led by seasoned media professionals with big ambitions to solve an issue the industry is facing,” Ludo Blecher, the director of the Fund, said. “We’re looking forward to watching their impact.”

Trint has also received funding from the Knight Foundation, is sponsored by Cisco’s innocaton lab and has a place in the BBC Worldwide Labs incubator.

And it won the 2016 Startups for News competition hosted by the Global Editors Network.

Currently journalists from major news organizations are using Trint, as well as academics, social scientists and marketing professionals, as well as “anyone who deals with the spoke word because 80 percent of the content on the internet is now audio or video, and it’s not searchable,” Kofman said.

Within the next few months, Trint will offer a media player that can be published onto websites and will allow readers to search through audio and video content. It will also make it easy for consumers to send excerpts of the content to social media, allowing Trint to act as an end-to-end publishing platform.

“We call ourselves ‘transcription reinvented’ because we want to make sure people understand we’re not simply a transcription service,” Kofman said. “We start by transforming the way you access your content.”