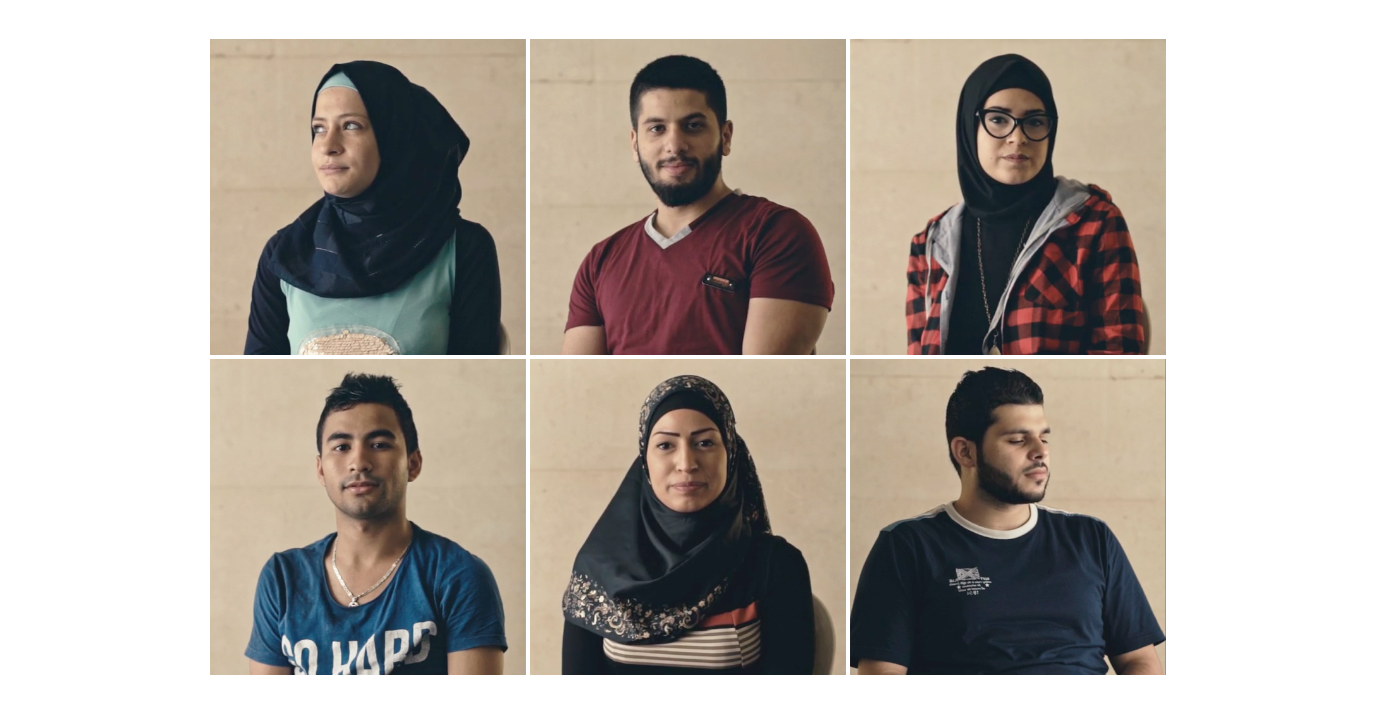 A series of images from the Syria Street project, by Brandon Tauszik.

A little girl, dressed in pink, sits in her bedroom, surrounded by her stuffed animals, and stares unblinkingly at the viewer. Her long brown hair moves subtly in the slight breeze; otherwise, she’s still.

Next to the image of the child is a quote:

“My bedroom is pink, but bullets have come through my wall so now I’m afraid to sleep in it. I don’t even know why people here are fighting here.”

The image of the child – her name is Zaynab – is one of a series of portraits that make up Syria Street, a web experience that uses GIFs as a medium to tell the story of violent conflict taking place in the Lebanese city of Tripoli.

The project was directed by Brandon Tauszik, an Oakland, Calif.-based documentary film artist, and was commissioned by the International Committee of the Red Cross.

Syria Street is the main road that runs through Tripoli, the second largest city in Lebanon, and divides the neighborhoods of Bab el-Tebbaneh, home to Sunni Muslims, and Jabal Mohsen, home to Alawite Muslims.

The two neighborhoods are divided by political tensions and their support or opposition to the government of Syria. Over the last decade, more than 200 people have been killed in violent clashes along Syria Street.

Tauszik sees GIFs as a hybrid between a photograph and film – a concept that turns the image format, usually reserved for humorous video clips or expressions of emotion, on its head.

A GIF can depict the meditative qualities of a photo as well as the passage of time through film, he said.

“I’m able to capture subtle motions that have a particular way of translating a person’s physical presence in space and time,” he said. “I hope that this allows for a deeper connection between the viewer and subject via the added nuance.”

The Syria Street GIFs depict ordinary people – such as a shopkeeper and a widowed mother of four young girls – and the ways in which poverty and violence impact their lives everyday.

In 2015 Tauszik released Tapered Throne, a GIF-based portrait series of black barbers in Oakland that was widely circulated online.

Ariel Rubin, the Head of Digital Content of the ICRC, found the GIFs evocative.

“You felt like you were there in such an immediate way,” he said about the 2015 project.

Inspired by Tauszik’s work, the ICRC wanted to create a similar project with Syria Street as the subject, as a way to bring an audience to Syria Street in an intimate and compelling way, Rubin said.

Tauszik said the story of the community there, which was both divided and united by Syria Street, resonated with him.

“I saw Syria Street as both a microcosm of certain regional tensions as well as an exemplification of urban violence anywhere in the world and its impact on citizen’s lives,” he said. “I set out with a loose framework for what I wanted to make, but ultimately the participants had the largest role in shaping the outcome of the project.”

Rubin said the ICRC has been operating in Lebanon since 1967. They saw the project as an opportunity to examine the story of one small street and share with a wider audience what a violent conflict can really look like.

“We felt like this was an important story for right now – these conflicts are not monolithic,” he said.

Tauszik said he had a Western audience in mind while producing the project. He wanted to tell the complex and sometimes violent story of Syria Street, but also humanize its residents.

The project allowed the subjects to tell their stories in their own words, and provided an opportunity to counter the at-times limited way in which they Middle East is portrayed in the media.

“Human conflict is never easily distilled, but on Syria Street, and in many cases, it’s the poor that usually pay the highest price,” Tauszik said.

The project was produced in English, French and Arabic, which Rubin says is key to the experience. The producers wanted the languages of Lebanon to live side-by-side online, the way they do in the country.

Tauszik recounted what one ICRC staff member told him after returning to Syria Street and showing residents the finished project:

“She said people were huddling around cell phones in the street to see it and that they finally feel heard. One teenager told her that it’s the first time he’s the name Syria Street followed by something beautiful and authentic, not a story that paints them as ‘monsters.’”