Remix: How to Live-Blog a National Event 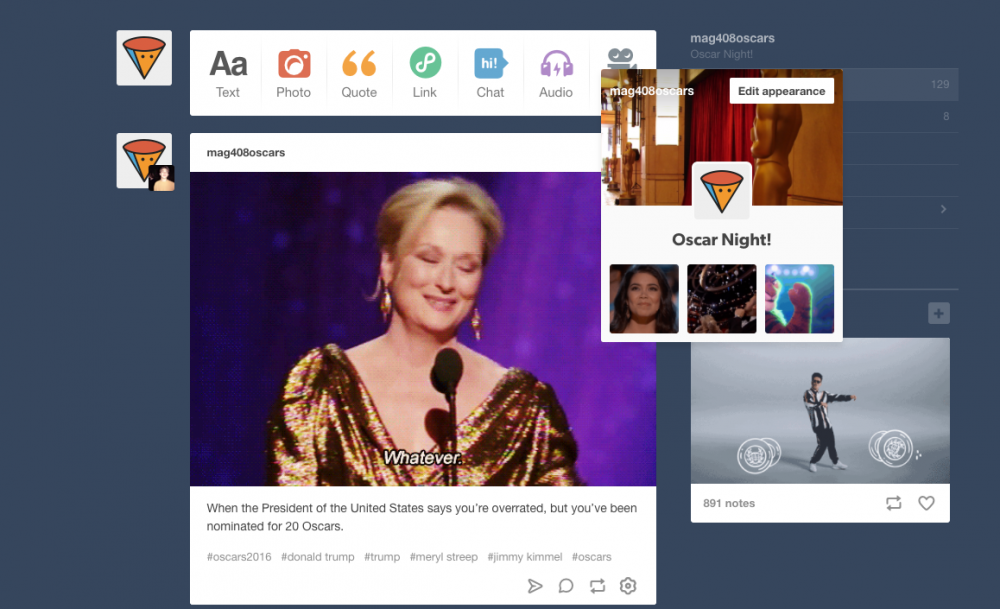 On Oscar night, 18 students in a magazine editing class at Syracuse University created nearly 40 posts for a live-blog.

Nearly every digital publication covers the live events they know their audience is watching. News organizations update their content in real time for elections, inaugurations and speeches, while magazines and other niche publications give similar treatment to the Oscars, the Super Bowl, and other events that capture the nation’s attention for a few hours.

The audience also creates a running dialog about these events, as viewers “second screen” on social media. Often these conversations generate their own content, as audiences react to their first screen by creating GIFs, memes and hashtags on their phones.

When I worked in industry, these big nights were memorable, exhilarating and more than a little exhausting.

When I worked in industry, these big nights were memorable, exhilarating and more than a little exhausting. Free technology enabled me to simulate the experience for Oscar Night with my magazine editing class. In one assignment, they planned coverage, found angles, pitched content, wrote, edited, used a CMS and integrated social media. Here’s how we did it.

I included the date of the Oscars telecast in my syllabus and let students know at the beginning of the semester that they would have an assignment that night. (Students who had to work got an alternative, but related assignment.)

As a group, we discussed the potential news angles or narratives to look for at this year’s Oscar ceremony, including politics or activism, Jimmy Kimmel v. Matt Damon, fashion trends and diversity.

Do the Right Thing

Students regularly discuss readings and industry news in our class Slack, so it was easy to add an Oscars channel. Slack became our virtual newsroom for the night.

I opted to use Tumblr for this assignment for several reasons, namely accessibility and ease of use. Tumblr’s interface is so intuitive that I didn’t have to use class time for training. It’s easy to add users to the class Tumblr, and the platform itself is flexible enough to support text, images, video and other embedded content.

Tumblr’s privacy settings can keep the blog out of search engines and make it nearly inaccessible to those without the direct link. This grants students the confidence to experiment…with a safety net.

Finally, we discussed copyright and professional use of images. For images, students could our school’s subscription image service or Creative Commons photos with the appropriate licenses. This part of the assignment, as usual, was challenging to enforce. (Another reason to make the site invisible.)

Our Slack channel erupts as the award for best picture goes to the wrong film.

Students were required to pitch ideas throughout the night on Slack and post two items to the class blog. Students refined their ideas by interacting with me, and each other, in Slack. Some students had to pitch several ideas before I, acting as editor, would greenlight one.

In order to encourage creativity and engage students with varied interests, I deliberately kept the assignment broad. Students had to create content suitable for the audience of our imaginary culture magazine aimed at Millennials. In addition to writing, they could incorporate tweets, gifs, and memes in their content. They could aggregate but had to add some kind of context or value. They could not write opinion pieces, but could use opinions from others on social media to make arguments.

Students posted nearly 40 pieces of content during the Oscars broadcast. One students used Timeline.js to track the history of host Jimmy Kimmel’s feud with Matt Damon. Another tracked Twitter reactions to Kimmel’s jokes. A student interested in fashion combed the web for “Red Carpet Looks for Less,” while another used box office data to rank Oscar-nominated films by ticket sales.

The next time our class met, we debriefed the experience. I led a critique of the Tumblr posts (biggest problems: posting without a headline, missing introductory text) and students explained their challenges and successes. Students showed enthusiasm about the assignment and their own work.

In addition to the in-class critique, students received individual written feedback on their posts from me. (To make it easier, I asked students to email me their links as “proof of publication.”)

This is a favorite assignment for students every time I teach this course. It creates a nice change of pace for the instructor, too.

Aileen Gallagher is an associate professor of magazine journalism at Syracuse University’s Newhouse School and the education editor for MediaShift.