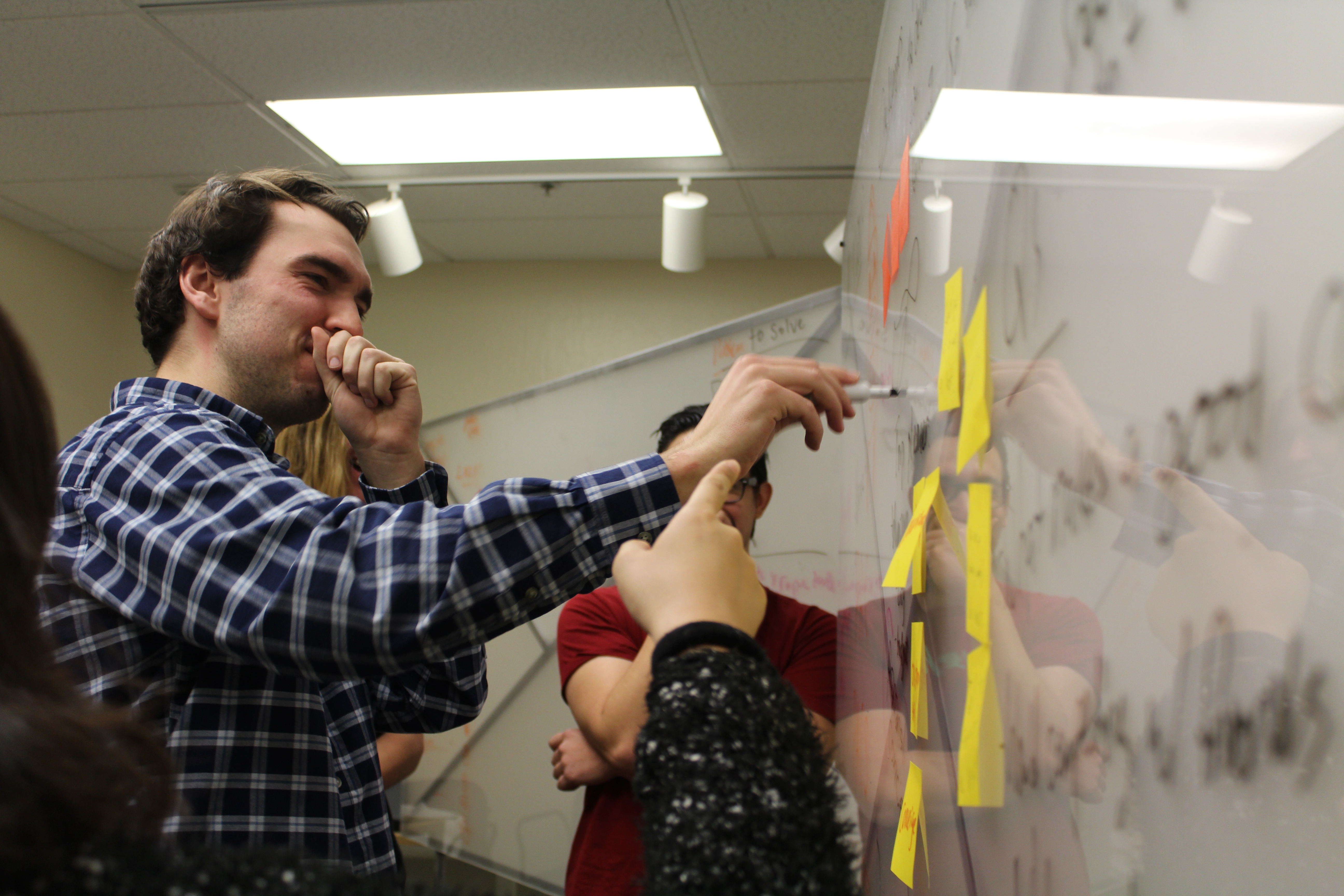 The author, Jackson Wagner, working at the J-School Hackathon in Reno. Photo by Adrianna Owens.

If you would have asked me two weeks ago how a chatbot operated (or even just what it was), what it is like pitching a startup company in front of a group of entrepreneurs or how you can properly monetize an idea within a business model, I would have responded with a blank stare.

I am a journalism major. I worry about words, not dollar signs or startup companies. I took Business 101 my freshman year, but coasted to a B while admittedly spending more time surfing the web than focusing in class.

I’ve never doubted my decision to pursue journalism, but this weekend showed me just how capable J-school students are when you present them with a deadline.

But when the opportunity to attend the J-School Hackathon hosted by the University of Nevada-Reno and MediaShift, I jumped on it. In the ever-changing world of journalism, it is always important to show that you’re willing to embrace change.

So I flew out to Reno and a weekend of the unknown. I was excited and anxious at the same time. After 36 hours of hard work and not much sleep, I left Reno exhausted but educated. Here are some things I learned at the 4th Annual J-School Hackathon.

1. A diversity of opinions and ideas is important

University of Montana student Kayla Robertson talks to a mentor at the 4th Annual J-School Hackathon. Photo by Adrianna Owens.

MediaShift assigned us to teams before we showed up, and after breakfast and an opening speech, we broke into these small groups and began working. My team consisted of four people, Raul Lara from UC Santa Clara, Yifei Liu from UC Berkeley, Alec Ramos from Galena High School and myself.

Raul was an energetic physics major and quickly became our team leader. He had been to hackathons before and knew what to expect, getting us on track from the beginning and pushing us until the very end. He created a prototype of our bot on his own, which earned us points with the judges.

Yifei was getting a master’s in journalism at UC Berkeley, although she said she doesn’t know if she will pursue a job in the field. She went out reporting, talking to people and getting real-life scenarios we could use in our pitch.

Alec was just 15 years old and had to get picked up from the hackathon by his dad, but could work Photoshop like a pro and designed the logo that we used to go along with our prototype.

The four of us came from different backgrounds and places, but by the end of the weekend were thinking as one. There were some disagreements early on when we worked at deciding our first pitch, but it was this influx of different opinions that helped us nail down our final idea.

2. The future of Chatbots is bright

I went to Reno not knowing what a chatbot was and left with four downloaded into my Messenger app on Facebook. These little apps are exactly what the name implies, robots that you can chat with.

They can perform a number of different functions. The bots I downloaded can help manage your bank account, send you trivia questions, inspire you with motivating quotes in the morning and everything in between.

The bot my team designed was named PACS, the Personal Automatic Concierge Service. The idea was to have a chatbot that we could sell to hotels that they could provide to guests. When you check in to the hotel, you get a QR code to download the bot, which you can ask any questions you would of a real life concierge.

If you asked PACS to find a good place to eat, it could draw data from Google and provide you with results. If you wanted room service, you could tell PACS and it would be delivered to your room.

The idea behind chatbots is that they provide a personal, back-and-forth interaction. Instead of searching Google, you just message your bot. It provides useful information in a basic messaging format that most people now are used to.

The winning team created a bot that could help millennials manage their money, and the judges, some of whom had created their own small businesses, said they would invest real money in the idea if they kept working on it.

You may not have heard of chatbots yet, but in a year or two everyone will be using them.

The Hackathon was presented to us almost in story form. We opened with a speech on chatbots to get us familiar with the topic, then were sent to figure out what kind of a chatbot we wanted to create.

When we reached the stage of our process that required us to think about the business side, Celeste LeCompte talked in front of the group about just that. We went back to work and then started thinking about how we would pitch our idea, which is when we heard Dusty Wunderlich speak about how to sell your product.

We went through the weekend in stages, like chapters of a story. By solving our problems one-by-one as they were presented, my team and I were able to finish with a surprisingly polished product.

Students listen to a talk at the 4th Annual J-School Hackathon. Photo by Adrianna Owens.

When I tell people I’m a journalism major, they often respond with a concerned look. Everyone knows that newspapers are struggling and, in association, most assume the entire field of journalism is too.

But journalists will always have a place, and technology is only going to help that. While there were other students at the hackathon, many came from journalism programs around the country.

It was amazing watching fellow journalists solve problems and figure out complex issues together. I’ve never doubted my decision to pursue journalism, but this weekend showed me just how capable J-school students are when you present them with a deadline.

Jackson Wagner is a junior at the University of Montana majoring in journalism. A proud native of Anaconda, Mont., Jackson is a senior editor at the Montana Kaimin.