7 Tips For Using Virtual Reality in the New Year 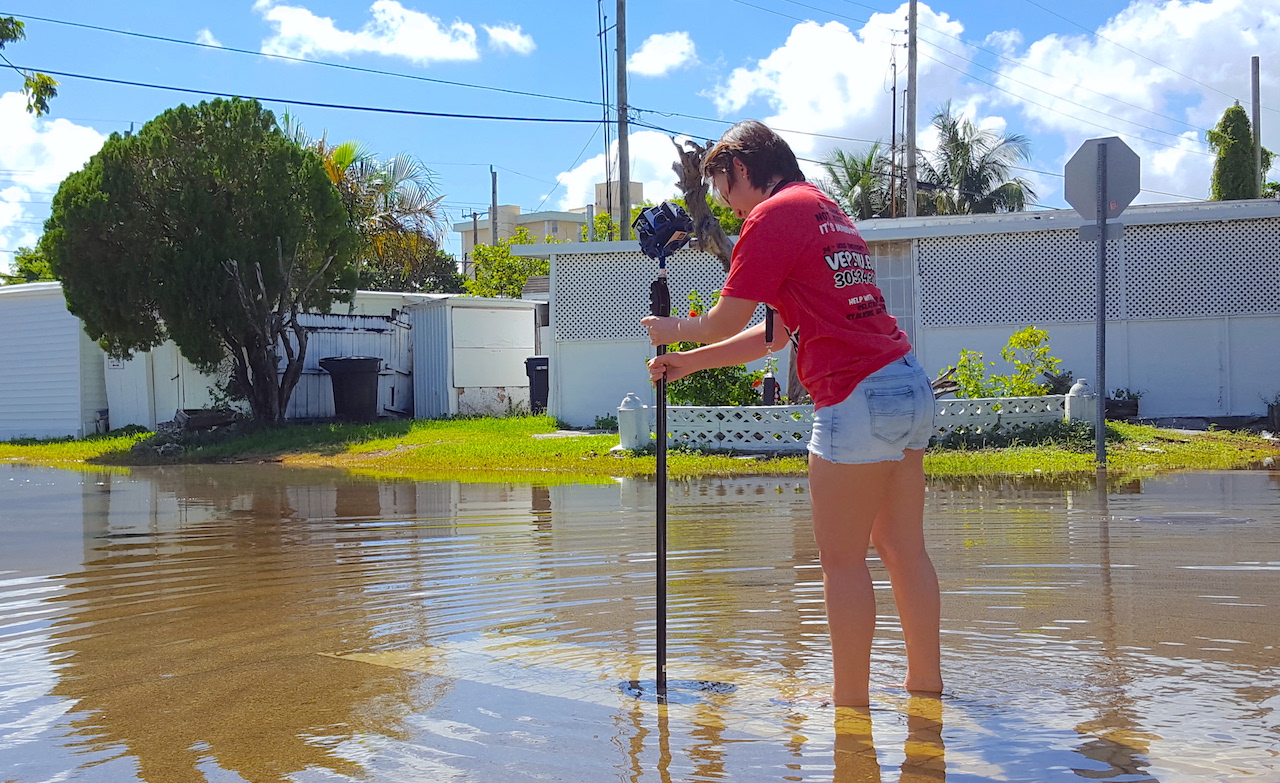 Nomi Hernandez-Leiva, a student at Florida International University, uses a 360- by 180-degree mount in flooded waters of North Miami Beach, Florida, as part of the Mobile Virtual Reality Lab. Photo by Ted Gutsche.

There are three ways to view the videos in this post. 1) View in Google Chrome and use your cursor to travel through the video; 2) With a VR headset, use the YouTube App, click the Google Cardboard logo on the bottom-right corner, and insert your mobile device into VR glasses; 3) Using a smartphone, open the video on the YouTube app and move around the video by sliding your finger on the touch screen and moving your body.

The above 360- by 180-degree video is a test done by students at Florida International University’s Mobile Virtual Reality Lab for a story that explores sea level rise in Miami.

The Whats And Whys Of VR

The term virtual reality and what it really means continues to be debated. Certainly, there are differences between VR, augmented reality, and simulated reality. Wikipedia does a nice job outlining this debate and the differences. At its core, VR represents an immersive, digital experience with environments and experiences that rely on new technologies.

VR can include simulations, animation, 360-degree video and 360- by 180-degree video in which the user is immersed in storytelling that surrounds them.

The project we have embarked on — and that we hope can serve as a test site for any VR work you wish to do — is an extension of the 2014-2015 Challenge Fund for Innovation in Journalism Education award from the Online News Association, which led to the eyesontherise.org project. Our new project is called VirtualEYES and uses VR to increase eco-journalism in Miami.

Scientists estimate that swaths of Miami-Dade County could be under water by 2100 and that some neighborhoods might be uninhabitable due to sea level rise by 2050. Yet, in South Florida, sea level rise is already occurring out of sight, rising through porous limestone, infiltrating freshwater supplies, and corroding or overwhelming aging infrastructure.

Still, audiences struggle to visualize this process due in large part to the fact that most of the environmental changes are underground and unseen. Virtual reality, then, provides an immersive experience that provides audiences with understanding, knowledge, and potential acts of civic engagement.

Work currently underway at the MVR Lab employs a 360-degree GoPro mount that allows 10 GoPro 4s to shoot video in a sphere, capturing video that allows users to view environments all around them. We are also expanding into new tools, including Kodaks’ PixPro.

Animation software such as Autopano, Autopano Giga, Adobe After Effects and several software plug-ins are used to stitch the 10 video streams together and to augment the video with interactive data visualizations related to the underlying story.

The MVR Lab examines the architecture and infrastructure of South Florida related to rising seas to promote public, digital communication about future challenges to our built environment. These stories, when polished, will appear on our website, but also at public events that use HTC’s Vive and Oculus Rift to show work to larger audiences.

Moreover, this virtual reality initiative fills a gap in critical, environmental journalism about rising seas. Already, much of South Florida experiences “sunny day flooding,” during which high tides or rain result in long-standing pools of water.

But the question now is, “How can others get started in virtual reality in 2017?” Consider the following.

Space Is important – Even For VR

Don’t think just because VR tools are mobile that you won’t need some place to edit video, record sound and build storyboards. We started our project in a 120-square foot editing bay and quickly outgrew our space.

More importantly, these spaces become secure storage for easy access and inventory, as well as a “sticky space” for students to gather and create teams.

What Tech Is Best?: The Chicken And The Egg Syndrome

The above 360- by 180-degree video tests the technology — and respective software — to capture and stitch underwater video as part of FIU’s Mobile Virtual Reality Lab.

There continues to be debate about what tech one should get. Indeed, we started with the 10 GoPro mount, but soon found that while it is an amazing tool for large and outdoor spaces, it’s a bit tricky when dealing with movement and doesn’t do as well as smaller cameras, such the PixPro for smaller or interior spots.

We’ve been able to make additional purchases to try new things — such as building a gaming PC rather than working on our MacBook Pros — to be faster, more stable in editing, and provide room for future growth.

In the end, get what you can afford and just get started.

Things Can Get Out Of Hand Quickly

Innovation happens fast. And tech continues to evolve. We expected that. What we didn’t prepare for was the massive interest and involvement of students in the Lab. Within a matter of weeks, we went from five core students interested in the project to a team of 20 regular producers and editors.

That meant finding more space and spending more time in the lab and in the field. It’s a good problem to have, but who would expect that students not even enrolled in one of our programs would come and work — for free — to learn and create?

Be prepared for that.

There’s A Plug-in For That

Despite all the tech, students still must enter into the unknown — a mangrove forest in North Miami, Florida. Photo courtesy of VirtualEYES.

Even the best research starting out to build our lab — a task of my summer capstone course — didn’t prepare us for the last-minute, necessary purchases, such as Mettle’s Skybox plug-ins to help with animation.

Thankfully, we received an initial $20,000 from the School of Communication + Journalism that allowed for initial purchases and an additional $6,000 from our College and a private donor. It’s important to remember — and to remind others — that the initial budget should save room for learning, additions and new items.

We are still working on interviewing sources in VR. CBC News did an interesting piece on their Highway of Tears, which focused on the story of a mother of a slain women, who spoke on VR from her living room. It’s a bit strange to see someone sit in a room alone and speaking to nobody.

It’s even stranger to ask someone to do that.

Our students are finding that producers need to explain and share VR with sources — many who have never tried on a visor — just as much as they need to explain the role of a journalistic interview.

Moreover, this is a good experience through which to remember most people have rarely spoken with a journalist, let alone talked on camera with someone or by themselves.

Get Out Of The Way: Let Students Rule

This tip is simple. Give students free reign. I shouldn’t write this, but I am likely more lenient with access to the MVR Lab and to its tools than my university would prefer. But honestly, students don’t need me there all of the time. They likely do better without me lurking.

Secondly, students need to have the right to fail. That might mean breaking something. I hope that doesn’t happen, but innovation doesn’t happen without risk.

We need to trust students and treat them as colleagues we trust. Set boundaries, put trustworthy students in charge, and leave them alone.

Who’s This For & What’s It Matter?

The above 360- by 180-degree video provides — without flash and flare — a moment inside a mangrove forest at Florida International University.

In the end, as with most emerging technologies, we must ask ourselves how our new forms of storytelling matter for the public at large and if they can even interact with the stories. Finding ways to engage with our audiences is critical to overcoming the digital divide and making our work meaningful.

Robert E. Gutsche, Jr. is Faculty Lead of the Mobile Virtual Reality Lab and its project VirtualEYES at Florida International University’s School of Communication + Journalism. He is also co-author of the new book, News, Neoliberalism, and Miami’s Fragmented Urban Space and co-editor of Visual Culture for a Global Audience.