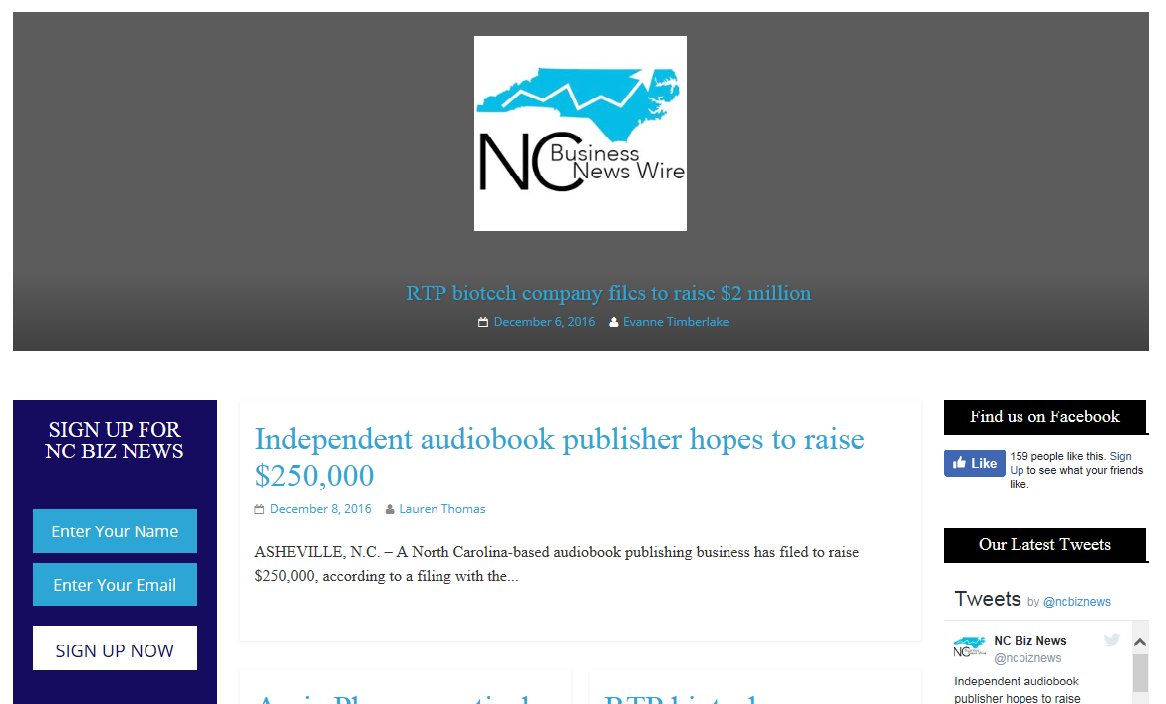 A group of 10 University of North Carolina-Chapel Hill business journalism students spent the last four months reporting and writing hundreds of stories about North Carolina companies and distributing them to media across the state.

The stories from the North Carolina Business News Wire have been picked up by media such as the Charlotte Observer, The (Durham) Herald-Sun, the Charlotte Business Journal and WRAL Techwire.

The North Carolina Business News Wire has shown news organizations that there’s a desire for stories about companies that routinely fall below the radar of traditional media.

The relationship worked well for everyone involved. The students received bylines in professional media while the news organizations received stories that they would not have covered otherwise because of their reduced newsroom staffs. And the journalism school received exposure across the state.

“Traditional newsrooms in North Carolina can’t keep up, and that’s where we come in,” said Hailey Waller, a senior business journalism major from Manhattan Beach, California. “We fill the niche of providing timely, top quality, data-driven stories out of the sheer desire to get our names out there as aspiring business reporters.”

Before the semester, Waller had not written anything published by a news organization. But she wrote more than 40 stories for the Business News Wire and parlayed that experience into an internship for Bloomberg News next summer and several freelance assignments for Business North Carolina magazine.

The goal at the beginning of the semester for the News Wire was to write stories about small public companies and private companies that often fell below the radar of many state media. Our theory was that exposing North Carolina residents to these companies would improve their understanding of the state’s economy.

Some issues with production

To be sure, there were issues. The students struggled at the beginning in understanding what was newsworthy in the Securities and Exchange Commission filings that they were reading every day. Others failed to meet the minimum number of stories — two — required each week although some aggressive students regularly wrote three and four stories per week.

The News Wire incorrectly identified a Bojangles’ investor in one story, and it used the incorrect logo for a bank in illustrating another story.

Some media in the state ignored our stories when we sent them copy about companies in their circulation area. And the students learned a hard lesson about journalism: Some newsrooms use newswire content to alert them to stories that they needed to write themselves without giving credit to the journalist who originally broke the story.

Speed was also an issue. When news breaks, it doesn’t usually wait around until 10 p.m. — after a student is done with classes and completing homework — to be written. The student reporters learned that the earlier they could get their stories on the wire, the more likely they’d be carried by a professional media organization.

But the positives far outweighed the negatives. In all, the students published more than 330 stories across 15 weeks, and approximately a third of those stories were picked up by one media organization or another.

The students learned what our media “clients” wanted in terms of content and what they ignored. Stories about layoffs, gleaned from WARN Act filings with a state government agency, were fought over by the student reporters after it became obvious that these would always be picked up. But stories about economic data and patent and trademark applications or grants were dropped after fall break because no one was publishing them.

Justina Vasquez, a student who worked with the North Carolina News Wire will intern with the Wall Street Journal next summer. Photo by Chris Roush.

“Although the wire covers local news and all its content probably isn’t newsworthy to every publication I’ll ever write for, I’m relieved that I have a better grasp of and more respect for important events in a company’s life that should be covered,” said Justina Vasquez, a student from Fayetteville, North Carolina, who will intern for The Wall Street Journal next summer.

The students also experimented. For example, after Donald Trump was elected president, Vasquez was assigned to produce a story about how the election was affecting North Carolina stocks and put together a chart showing the biggest gainers and losers.

By the end of the semester, the students were also posting Facebook Live segments where they discussed the major business news stories in the state that day. They also created a Twitter account for the News Wire and a daily email that by Dec. 8 had 90 subscribers.

The day after the end of classes, the News Wire students presented their experience to a group of faculty, professional journalists, fellow students and the head of investor relations and public relations for one of the companies they’d written about.

“I’m impressed that I’ve written so much,” Vasquez said. “I’ve been keeping a Google Drive folder of all my stories, and I easily have about three times the clips I’ve written anywhere else combined. The stories are short and the nature of the wire requires lots of content with a quick turnaround, but I’m still impressed with myself and my ability to write well about companies in such wide-ranging industries.”

There were suggestions on what they could do better — the IR professional would have liked to have met the student reporter who covered his company’s IPO — but the feedback was overwhelmingly positive. Mark Sutter, the editor of the Triad Business Journal in Greensboro, told the students he used their content to supplement the reporting from his newsroom. Almost everyone suggested that the News Wire expand its content next semester with longer, in-depth stories about the companies we’d covered.

As for next semester, the News Wire is expanding. Some of the students will be returning for a second semester of work, while eight new students have signed up for the wire. As a result of the larger staff, the News Wire will expand by covering Maryland companies for citybizlist’s site in Baltimore.

We’re also considering the News Wire’s future. The Daily Tar Heel, the student newspaper, is interested in creating a subscription business news site reporting on the Research Triangle Park companies that are the News Wire’s bread and butter, and I’ve held some informal talks about how we can collaborate.

More importantly, the North Carolina Business News Wire has shown news organizations that there’s a desire for stories about companies that routinely fall below the radar of traditional media.

And it’s shown other journalism schools that there is at least one new and unique way of providing students with professional work that gets them experience, as well as an understanding of how a media organization works.

Chris Roush is the Walter E. Hussman Sr. Distinguished Professor in business journalism at UNC-Chapel Hill. He is also the author of “Show me the Money: Writing Business and Economics Stories for Mass Communication.”