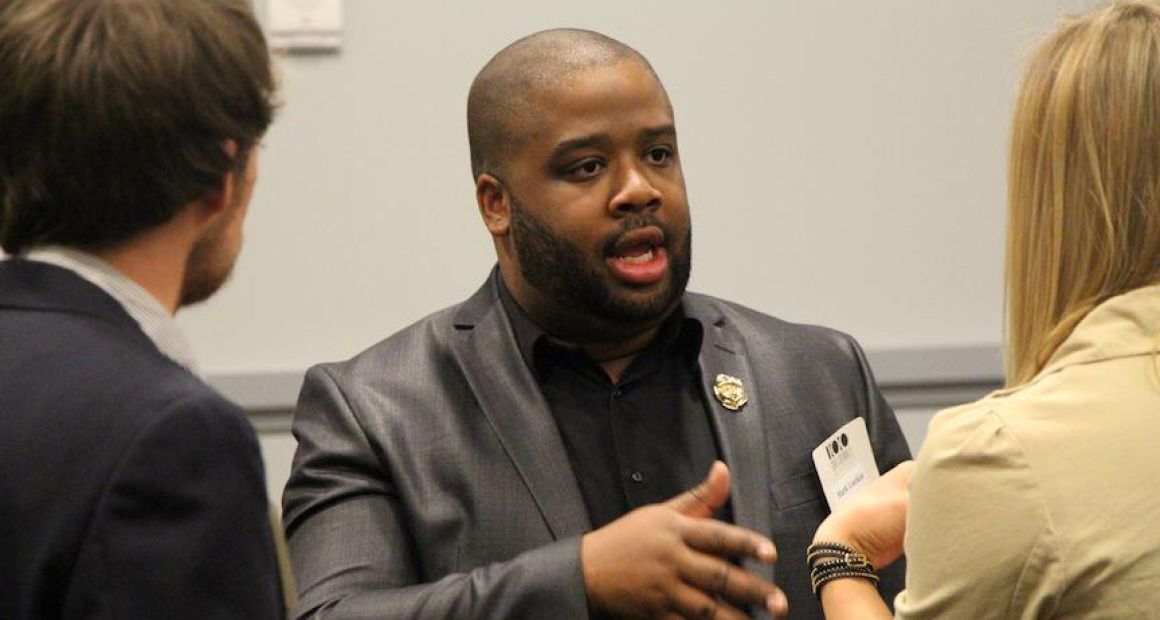 "The problem that some of these social networks run into is they will only do the banning or help someone in an abusive relationship with trolls once it becomes a big thing in the press." -Mark S. Luckie on harassment on social media

In the news this week, could president-elect Trump be banned from Twitter or Facebook for hate speech? And should the media report on every tweet from Trump? Time Inc. rejects a takeover bid from Edgar Bronfman Jr. but now Meredith might be interested again. Politico co-founder Jim VandeHei reveals more about his new startup, Axios, and its $10,000 subscription rate. Politico’s Joe Pompeo joins us to chat about Breitbart’s boycott of Kellogg’s. Our Metric of the Week is Publication Quality Score, and we speak with digital strategist Mark Luckie to talk about his experience working at Twitter and Reddit.

Mark Luckie is a digital strategist, career journalist and author of “The Digital Journalist’s Handbook” and the novel “DO U.” He is the former Manager of Journalism and News at Twitter and the Head of Journalism and Media at Reddit. Mark has led digital initiatives for the Washington Post, the Center for Investigative Reporting, The L.A. Times and Entertainment Weekly.

Could Trump Be Banned from Social Media?

President-elect Donald Trump will be the first president in history who has used his Twitter account as a bullying platform, a way to whip up followers, and a late-night trolling venue. He might also be the first to be banned from Twitter. According to Slate’s Will Oremus, Twitter would not make any exceptions if Trump were to break the site’s updated harassment guidelines with hate speech or personal attacks. Facebook, on the other hand, told Oremus they would not apply typical community standards to his posts because of “their newsworthiness and widespread popular support for his views.” As Oremus points out, this is a real turn-about for the platforms, with Twitter being known as absolutist about free speech, until recently changing course to curb harassment. But still, the odds that Twitter would actually remove tweets or ban Trump seems remote, as Oremus points out, even though half the country would probably breathe a sigh of relief if he were banned.

And as he does continue to tweet, journalists are in another quandary: Should they treat every single tweet as a big breaking news story? Especially as he makes false allegations of massive voter fraud, and says that flag-burners should get their citizenship taken away. Most editors told the New York Times that they would have to consider each tweet to decide if it was newsworthy, but in general, anything the president says, whether on Twitter or on a street corner, is worth noting. But Politico’s Jack Shafer takes a different attitude toward Trump’s Twitter storms, saying that “you starve the troll by just pointing out that the troll is lying and the troll is trolling.” Will journalists really take a unified stand on Trump’s Twitter pronouncements? That’s doubtful, according to Daniel Drezner, writing for the Washington Post, as the public wouldn’t buy into the media’s response and let’s face it, journalists are a cantankerous lot. Whether we like it or not, Trump will continue to successfully troll Twitter and those who pay the most attention will likely get trolled the most.

Like all legacy media companies, the big magazine publisher Time Inc. has been struggling with digital disruption. It recently changed CEOs and has tried to push harder into online video, with mixed results. Now comes word from the New York Post’s Keith Kelly that a group of billionaire investors led by Edgar Bronfman Jr. offered a $1.4 billion buyout bid for Time Inc., a 30% premium on its current valuation. The bid was reportedly rejected by the company’s board. Nonetheless, Time Inc’s stock quickly rose 20% on Wednesday in the wake of the news. Time Inc., which includes titles such as People, InStyle and Sports Illustrated, spun off from Time Warner in 2014, and has been saddled with $1.5 billion in debt. While this was the year it was supposed to turn around declining ad revenues, instead the company expects to have flat or slightly down revenues for the coming year.

So what happens next? After the unsolicited bid, Time Inc. would likely have to field other offers, including from former suitor Meredith Corp. which had tried to buy the company before it was spun off. Women’s Wear Daily’s Alexandra Steigrad reported that Meredith was considering making another bid, and one analyst was bullish on the idea that a merger could bring cost savings. Meredith had tried to buy Media General earlier this year but that fell through. While so far Edgar Bronfman Jr. has been rebuffed by Time Inc., his group is a curious one to take on print magazines, as they have no experience in publishing. Instead, Bronfman is known as the Seagram liquor company heir who squandered billions on a move into entertainment with Vivendi, and later took over Warner Music. But even though their offer was rejected, Time Inc. might be thankful for the bid if it leads to a better deal from another party.

We finally know what Jim VandeHei’s new media venture is going to be called: Axios, which means “worthy” in Greek. The name makes a little more sense if you read the site’s manifesto which proclaims “Media is broke — and too often a scam.” As VandeHei told Vanity Fair’s Sarah Ellison, media companies fall into two camps — either you’re the New York Times and “reliant on a type of advertising that you know is going to die” or you’re a Business Insider that says “just give me a lot of traffic, I swear to God I will find a business model.” Strong words.  So how is Axios going to fix those problems? Well, that’s still a little murky. As we’ve reported before the new outlet will be focused on business, tech, politics and media. In their company manifesto, they downplay massive page views, say they will focus on people who want “serious news and information” and will reach people directly on social media.

As for the money, it seems Axios is going to be pursuing a native advertising strategy that will live on its website and embedded in social content. While the site will start out free, they expect to make 50% of revenues from subscriptions, some of which could cost up to $10,000, according to VandeHei, in an interview with Recode’s Kara Swisher. The biggest question is just how much different Axios is going to be from Politico, where many of the Axios staff come from, including executive editor Mike Allen. As Ben Mullin points out on Poynter, “any of Axios’ big ideas — dominating subject areas with newsletters, focusing on digital subscription revenue and twining old-school reporting with digital acumen — are tenets that Politico has pioneered since its launch.” Or as Vanity Fair’s Ellison points out: why launch an expensive new digital media startup right when the field is starting to consolidate? VandeHei responds that this is why they are planning “innovative twists on content, platform audience and monetization.” Even though Vanity Fair touted its story about Axios as revealing its plan for media domination, the plan still seems a little vague.