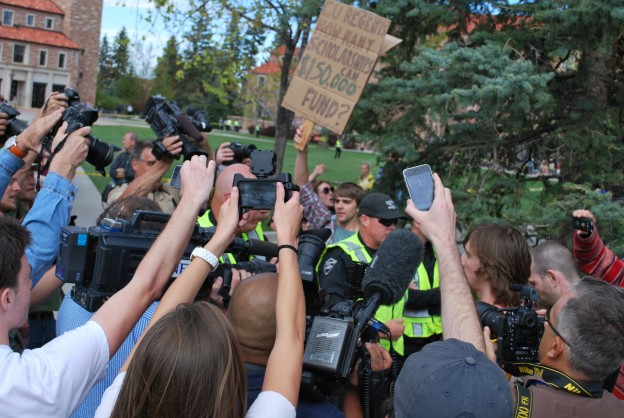 Across the world, mobile journalists are telling riveting stories with little more than a smartphone in hand. This piece, originally published on IJNET is a part of a series that will examine how we define mobile journalism, how traditional newsrooms are adapting, citizen contributions, how mobile is improving journalism and disruption in mobile journalism.

One mobile phone. That’s all you need to be a mobile journalist, or a mojo, as practitioners call themselves.

If they have been attracting attention for several years, starting wasn’t particularly easy. As mobile phones’ cameras and audio recorders got better, the internet saw a gradual increase in the number of amateur videos uploaded to platforms like YouTube. But in some newsrooms, a few tech-savvy journalists saw the opportunity to use their mobiles as a reporting tool.

“I was taken by the technology when at first, I realized it was possible to stream live videos with a mobile phone,” said Stephen Quinn, an experienced mojo trainer.

John D. McHugh, a photojournalist who founded a startup that gathers and verifies eyewitness media, remembers when British soldiers recorded “extremely disturbing” combat footage in Afghanistan with their Nokia cellphones and handed it to several media outlets when they went back home, creating a major scandal in the United Kingdom.

“That’s really when I saw how mojo was going to change journalism,” he said. “It was the most amazing insight into a war that the UK public simply hadn’t seen up to that point.”

Mobiles could be used to capture a moment anytime and anywhere even during crowded events, as Björn Staschen, mojo trainer and head of NextNewsLab at German broadcaster NDR, found.

Every May 1, a left-wing protest unfolds in Hamburg, Germany. Every five years or so, the protest gets violent, attracting media attention; the rest of the time, it doesn’t make national headlines. Staschen didn’t feel the need to get a camera crew, especially as it was more expensive on the weekend. Instead, he took his cellphone, thinking he could provide some video footage to the online team. After the event, the quality of his footage surprised him, he said.

The advent of the iPhone allowed for better image and sound quality, increasing the possibilities for mobiles to be used as professional journalistic tools.

Neal Augenstein, a radio journalist with WTOP, a radio station in Washington, D.C, started experimenting with his iPhone in 2010. He felt he was spending a lot of time using a traditional recorder and laptop. When he found a multitrack audio recording app, he found he could do everything on a single device.

“Since 2010, I’ve been doing all of my field reporting just with my iPhone and iPad,” he said.

Six years later, Augenstein is far from the only one using his mobile as his primary reporting tool on the ground. There is so much interest in mobile journalism that Glen Mulcahy, dubbed the “king of mojo” by his peers, started Mojocon, a yearly conference in Dublin. It puts forward the best practices and experiments in mobile journalism, mobile content creation, mobile photography and new technologies like drone filming. A mix of practitioners and newbies, mostly from Europe, gather to learn and share their experiences.

Although Mulcahy said he had trouble getting speakers with interesting stories in the first year, the conference is progressively evolving. Mojocon’s development reflects the evolving practice of mobile journalism. While it started as a very technical tool trying to emulate the traditional camera, mojos have been trying to create a new storytelling language.

“There was a very strong feeling actually at the second conference that [mobile journalism] had matured somewhat,” said Mulcahy.

On the Facebook group created after Mojocon, journalists sometimes debate on how to define mobile journalism. Is it when a story is shot on a mobile device? Does it have to have been edited on a mobile too? What if someone other than a journalist shot it?

Quinn wrote a book with Ivo Burum, another mojo trainer, to try to standardize and clarify the meaning of mobile journalism.

“One of the things we did early on was to define mojo: mojo is editing on mobile phones as well as the shooting,” Quinn said. “It’s also captioning, putting headlines and credits. Real mojo, true mojo is doing everything with a mobile phone.”

However, many journalists continue to rely on non-mobile equipment in their daily work. For example, some still edit on their computers. Mobile journalism is also seen as a broader style of journalism.

“[It] has very little to do with mobile phones,” wrote Nick Garnett, a BBC journalist. “It’s about the reporter being mobile, not the equipment. Mobile journalism involves people realizing that they and the gear they carry are like a Swiss army knife, with lots of attachments. You choose the one you need.”

Mojos around the world see their mobile devices as powerful tools to produce quality journalism. Although there is no real consensus on the definition of mobile journalism, a growing community of mojos is experimenting with different applications, testing limits and listening to how their audiences are engaging with this new form of journalism.

Clothilde Goujard works as a freelance journalist, covering issues related to digital news and the future of media. She studied at McGill University (Canada) and City University London. She has experience in video journalism and social media. She loves storytelling and is an avid reader, as well as a fan of VR. Follow her @clogouj.