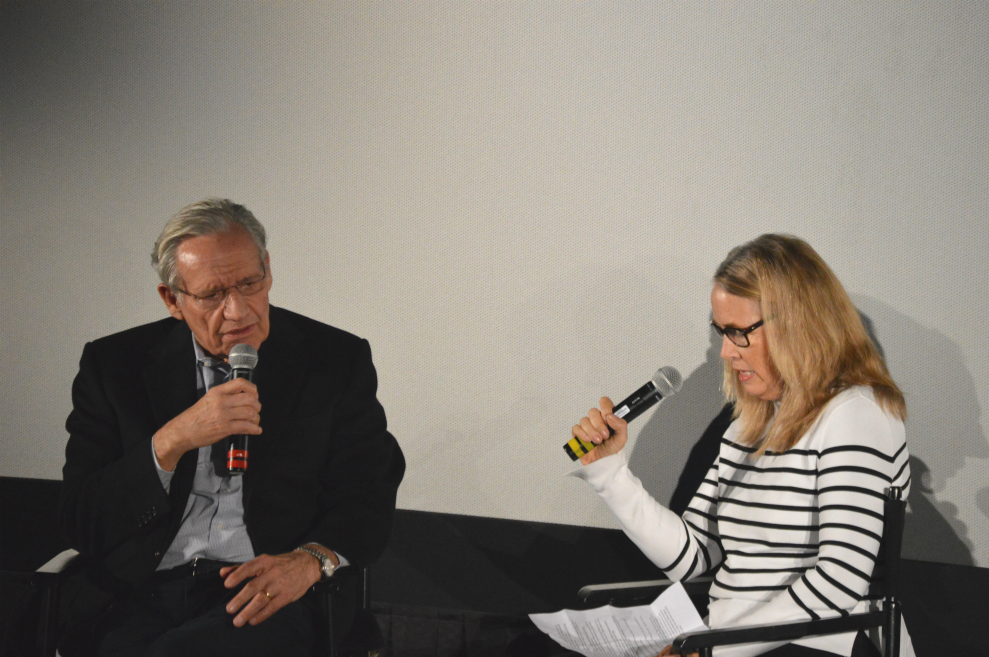 Now that the prospect of President Trump has become a reality, how did the media get it wrong, with so many polls and predictions off the mark? Plus, we’ll look at the media winners and losers, with Breitbart planning a European expansion, while AT&T and Time Warner might not get the merger they want. And what about the role of social media? Was Facebook’s lack of editors to blame? Politico’s Hadas Gold will join us to talk about potential safety problems, and First Amendment issues, for reporters under a Trump administration. Our Metric of the Week is, of course, election metrics, and we talk with Alicia Shepard about election failings and the state of online discourse.

Alicia Shepard is a veteran media writer and former NPR ombudsman. She is the author of “Woodward and Bernstein: Life in the Shadow of Watergate” and co-author of “Running Toward Danger: Stories Behind the Breaking News of 9/11.”  She has been teaching media ethics at Georgetown and other universities for the past decade. In March, she returned from two years in Afghanistan working with Afghan journalists and the U.S. Agency for International Development.

Hadas Gold is a reporter at POLITICO, covering media and politics. Hadas joined POLITICO after a wide range of experience from following trash pickers in Argentina with the Pulitzer Center and work with Spanish-language network NTN24, to internships with “60 Minutes”, PolitiFact and Cox Newspapers.

The Failure of Digital Media in the Election

The long campaign is over and the results have left many pundits and pollsters with a post-election hangover. It will be up to history to make sense of this result but what is clear now is that the media miscast this election so badly some are comparing it to the infamous “Dewey beats Truman” headline of 1948. The big question many people are asking now is “How did this happen?” How could the media consistently underestimate Donald Trump’s chances to win the presidency? And media watchers have not been kind in their answers. “To put it bluntly, the media missed the story,” writes Margaret Sullivan of the Washington Post. While the New York Times’s Jim Rutenberg wrote “The misfire on Tuesday night was about a lot more than a failure in polling. It was a failure to capture the boiling anger of a large portion of the American electorate.”

For Fortune’s Mathew Ingram, the fragmentation of the media “allows us to find sources that cater to our beliefs instead of challenging them, and it allows us to see what we want to see, not what is actually there.” Nieman Lab’s Josh Benton put the blame squarely on Facebook and the spread of misinformation and fake news there. As he wrote, “There were just too many people voting in this election because they were infuriated by made-up things they read online.” But Politico’s Jack Shafer didn’t buy into the narrative about the media being to blame, saying they did their job, but the public wasn’t interested in reading that. As Shafer wrote, “Trump won not because the press failed but because he was selling something more valuable to voters than integrity, honesty and humanity.” This wasn’t just the media missing the story, but also about the public skipping the story, not believing the truth. And it was also about our obsession with data journalism, with polling, with numbers, at the cost of the human story.

Though we may have experienced a seismic shift in our political system, “the sun will rise in the morning” as President Obama put it. And so we turn to the media business and how the landscape is re-orienting itself to the new president-elect. First, and this is no surprise, prospects for AT&T’s acquisition of Time Warner will likely find an opponent in Trump, who, like his rival Hillary Clinton, has spoken out against the deal. Trump vowed to block the deal on the day it was announced, and said he would also break up Comcast and NBC Universal. The markets reacted by pushing down Time Warner’s stock price on Wednesday after the election. But analysts aren’t so sure that Trump’s actions will back up his words. Gene Kimmelman of Public Knowledge, and a former antitrust official, told Bloomberg that Trump will be a “wildcard for antitrust enforcement…we don’t know what kind of enforcers he’ll select.”

Breitbart News Network, on the other hand, is clearly a winner coming out of Tuesday’s election and not only because Stephen Bannon, a former Breitbart chairman, was chairman of Trump’s campaign. The far right news network revealed to Reuters it would be expanding its U.S. operations and opening offices in both Germany and France to help in the rise of far-right parties there. Additionally, the company is exploring the idea of developing a new television show with Milo Yiannopoulos, a rising star at Breitbart and controversial figure who was banned from Twitter for harassment. According to CNN Money’s Dylan Byers, Breitbart is largely funded by hedge fund billionaire Robert Mercer, who has attacked the Republican establishment. So while many media outlets are in self-flagellation mode for their mistakes in the run-up to the election, Breitbart is in full celebration and expansion mode.

The Role of Social Media in the Election

Once again, social media is under the microscope for its role in political news and discussion leading up to the election. As we noted earlier, some have put Facebook on notice for letting fake news spread on its network without a check. And we all know the experience of seeing either complete mourning and shock or complete jubilation on feeds of different ideologies. And what they see on those personalized news feeds does change minds. Pew Research reported that 20 percent of users have changed their mind on an issue because of something they saw on social media. Digging deeper, 17 percent of users said news on social media affected their views on a specific candidate. Of course, the majority of people on social media haven’t been changed by what they see, with  82% saying they never moderated views on a particular candidate and 79% saying they never changed their views on a social or political issue.

As for election night itself, Twitter was again the big winner. Despite the company’s recent failed auction to sell itself, it showed to be a popular place during big events. Twitter had a record-breaking 75 million tweets about the election, and its partnership with BuzzFeed for a live-feed helped lend some legitimacy to it as a news source. As John Herrman writes for the New York Times, social media sites like Twitter and Facebook “explicitly place the individual at the center of his or her media universe, recording, amplifying and perpetuating their preferences into complete, customized media experiences that no traditional news provider can rival.” Facebook, too, had a huge influx of usage on Election Night with 115 million people generating 716 million likes, posts, comments and shares related to the election, and 643 million video views. The bottom line is that social media is becoming more ingrained as a media habit, so we’ll have to continue to consider what works well there, and what needs improvement.