The Election and the Media: Lessons Learned From the New York Times 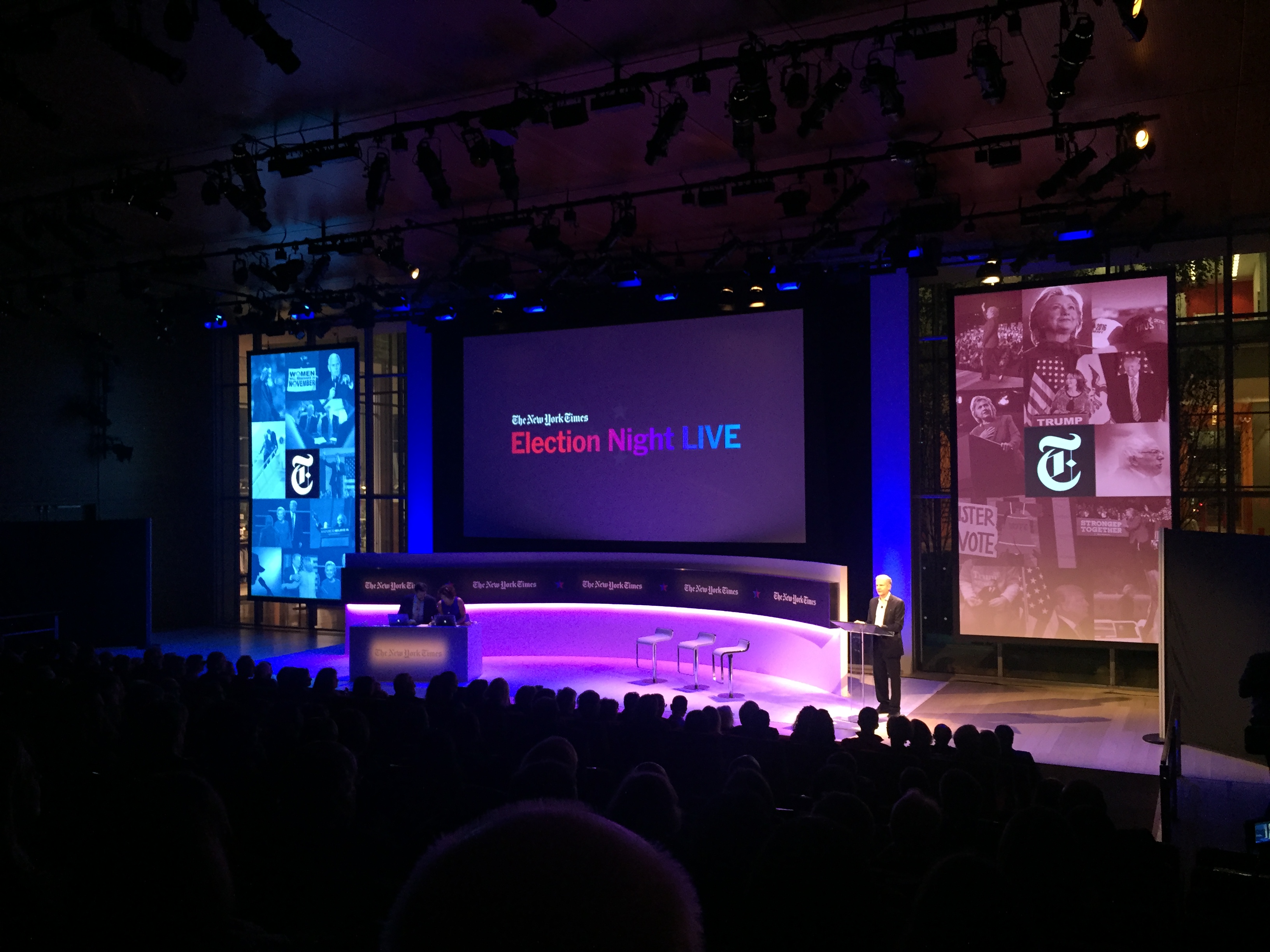 Covering the 2016 presidential election has been unlike any other, according to New York Times reporters and editors.

The news organization’s normal standards for figuring out how to cover a divisive political race, primarily relying on expert voices to help navigate complexities, “started to feel not quite right,” said Managing Editor Joseph Kahn.

Kahn made the comments during the New York Times’ Election Night Live event, hosted Tuesday night at The Times Center in New York City, during which journalists and other guests gave commentary in real-time while election results were coming in.

Kahn explained that the election encouraged the Times to experiment with new ways of storytelling.

For example, putting a camera in the middle of a Donald Trump rally and letting supporters speak for themselves brought to light some issues, particularly the anger swelling among voters, that needed to be confronted during this cycle.

The Role of Media in the Election

The election defied the news media that relies on quick opinion and required a certain amount of digging that only a small handful of news organizations are set up to do, he said.

“In that sense, this election was a revelation,” Baquet said.

Times staffers later debated among themselves whether the media had overplayed the story of Clinton storing emails on a private server in her home and deleting some of them.

“I don’t know,” Frank Bruni, an op-ed columnist, said. “It becomes very difficult to make that judgement because at a certain point, the volume that has been said about a story makes it a story in a continuous way.”

Reporter Michael Barbaro acknowledged that the press does sometimes pay more attention to issues that involve its own access to information – in this case, government officials storing public information privately and thereby limiting access to it.

Bruni expressed some sympathy for Clinton: she’s someone who’s been in public life for a long time and was trying to carve out some zone of privacy, he said.

“One thing to wrestle with after the election is, how do we grant our public figures some human and humane measure of privacy?” Bruni continued. “We’re here on Election Day with most Americans not liking either choice that they have. We’re not going to have a plentitude of choices going forward if we send the message that to run for public office is to say goodbye to all of your privacy forevermore. So I think we in the press need to talk about how we become more sensitive to that and don’t repel people from running for public office.”

“And social media, as you guys know, is not pretty,” she said.

She reiterated comments from a former New York Times editor that “running for president is the new selfie” – and that the press was used as a selfie stick.

“It might have been inevitable in the era of Kardashian that we’d have a Kardashian candidate like Trump,” she said.

The Decision to Call Donald Trump a Liar

The New York Times received some backlash for its decision to call Donald Trump a liar in two stories and in a headline. Staffers explained that decision on Tuesday night.

The paper faced some backlash after it called Trump a liar in two stories and in a front-page headline. Trump, who was well-known for being a proponent of the “birther” movement, which sought to delegitimize the presidency of Barack Obama by questioning his citizenship, had in September claimed to “finish” the issue and then blamed Hillary Clinton for starting the movement in the first place.

Baquet, who said he could feel that the paper’s conventions were being challenged – it had never before called a  candidate a liar – said it was the “perfect” moment to call Trump out.

“I’ve never experienced a political candidate who so very openly and brazenly lies … It was so beyond the normal political obfuscation,” he said. “I didn’t think there was another word you could use. Any other word, I think, would have been cowardly.”

International Audiences Were Engaged, Too

At the beginning of the election, there was an expectation that the Times might alienate the paper’s overseas audiences because the news would be so saturated with election coverage.

Ultimately, the international audience consumed election coverage at the same rate that they consume other coverage, Kahn said.

During a New York Times Election Night Live event, reporters and editors discussed the role of the media during the 2016 presidential and shared was it was like to cover the candidates. Photo by Gage Skidmore on Flickr and used with Creative Commons license.

Staffers discussed their own experiences with covering the candidates during the 2016 election as well as in years past. Political reporter Yamiche Alcindor, who spent time at Trump rallies while on the campaign trail, said she has tried to stay objective even when confronted with comments that were insulting.

“As a journalist, you’re supposed to be divorced from the topic, and most of the time I can do that,” she said.

However, once a Trump supporter assumed that, because she is an African-American woman, her parents likely hadn’t gone to college.

“I had to stop him and say, ‘no, both my parents have PhDs, actually.’” To me that was uncomfortable because – oh god, you’re not supposed to do that,” she said. “But I also was, like, ‘You’re not gonna talk about my mother.’”