Could Civic Journalism Have Helped Journalists Get Election Coverage Right? 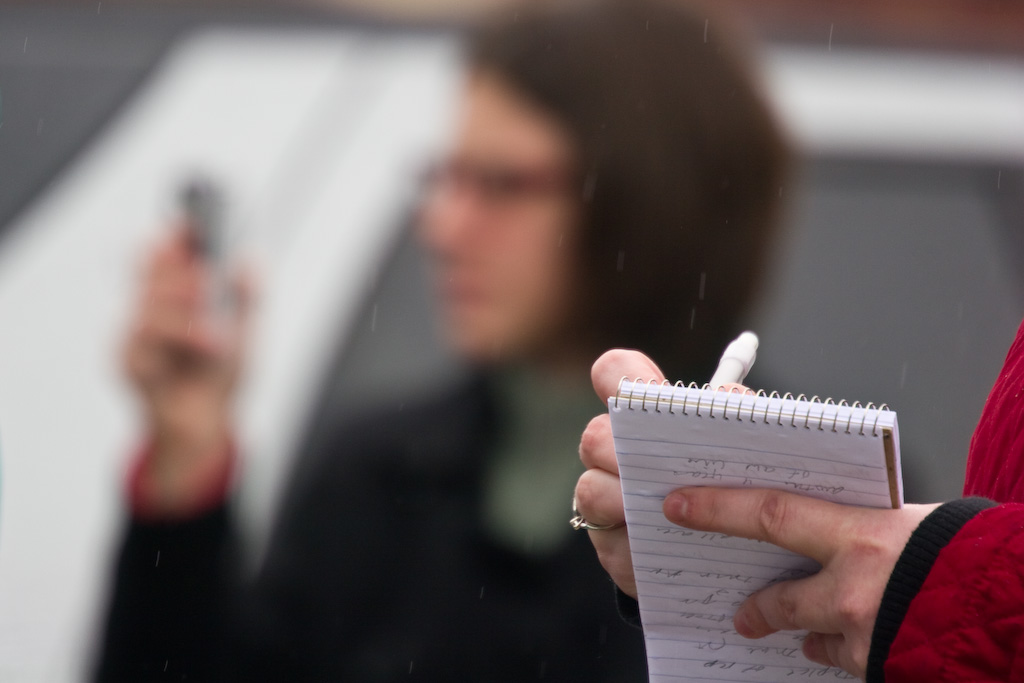 It is ironic how strikingly similar the issues in today’s media landscape are to what motivated journalists to embark on civic journalism experiments in the 1990’s.

So striking, that many civic journalists say that journalists would not have miscalled the presidential election if they had done basic civic listening.

Examples from the heydays of civic journalism from the Pew Center for Civic Journalism.

Consider that we have been awash in ineffective campaign coverage that has journalists rethinking their practices. The public’s trust in media has plummeted. Newsrooms are increasingly willing to experiment and innovate. There is new emphasis on involving citizens (now under the rubric of “engaged journalism”). And, most significantly, we hear lamentable concerns that our democracy is endangered. These were the exact conversations civic journalists were having in the early ‘90’s.

What’s different? Now, there is heightened anxiety about how to financially support news gathering. And that has made editors more willing to engage with news consumers and less arrogant in asserting that there is only one way to do journalism.

As the former director of the Pew Center for Civic Journalism, I’ve been asked by the Democracy Fund to pen a response to its new white paper “How Best to Serve Communities. Reflections on Civic Journalism.”

The chief question it poses: How is the emerging engaged journalism different from what was called civic journalism in the 1990s?

So I asked some of the CJ movement’s leaders for their thoughts. To be sure, they said, civic journalism was the pre-digital precursor to today’s engaged journalism. But now, it’s so much easier and more immediate to connect with audiences digitally than setting up town halls or tables in shopping malls, the engagement onramps of the ’90s, to listen to citizens.

“But some things are missing that were key to the efforts of civic journalism,” said Martha Steffens, who led the robust “Facing our Future” CJ effort in 1997 as editor of the Binghamton (NY) Press & Sun Bulletin.

“Now ‘trolls,’ loud, fringe voices or even a generation more adept at technology are the ones that reach the media,” said Steffens, now Chair of Business and Financial Journalism at the University of Missouri’s School of Journalism. News organizations are not hearing as much from others because they not actively seeking out people’s concerns. “We’re waiting for them to tell us.”

“Digital is so user-centered and civic journalism is really about orienting our mindset to readers and users,” said Wendy Warren, now director of Integrated Media at NBC Washington and former VP and editor of Philly.com. As a top editor at the Philadelphia Daily News, she sought to gather public input on important issues leading up to the 2007 Mayoral race in The Next Mayor initiative. “It was hard-core civic journalism,” she said.

Indeed, the election coverage of the 1988 Bush v. Dukakis presidential campaign race left many journalists longing for something better. By the early “90s journalists — in Wichita, Kan.; Charlotte, NC,; Portland, Me.; Madison, Wis, at NPR and elsewhere — worked to reimagine campaign coverage. They emphasized listening to voters and focusing on people’s concerns instead of on horse-race polls. In Madison, efforts to help voters understand a U.S Senate race led to a measured increase in knowledge, said Frank Denton, now VP of Journalism at Morris Publishing Group and editor of The Florida Times-Union and Jacksonville.com. It also led to more positive views of the media partners.

“If we had [civic journalism] in place today, we wouldn’t be in the position we are in with the election,” said Jeannine Guttman, former editor of the Portland Press Herald, where she spearheaded the “Maine Citizens Campaign.” Indeed, she said, more reporters might have picked up earlier on the “white rage” simmering in rural America.

When the Pew Charitable Trusts launched the Pew Center for Civic Journalism in 1993, it wasn’t much concerned about journalism. It was worried about democracy and civic life.

Conditions now might be worse. “People are realizing that civil society is falling apart, to be honest,” said Lewis Friedland, a journalism professor at UW-Madison and one of the nation’s experts on civil society and public life. “A lot of people, especially after this election, see that the civil society that ties this country together is in the process of disintegration. Those bonds are fraying in fundamental and deep ways.”

“Back in the ’90s a lot of people saw that disintegration was beginning to occur,” he said, and they tried to come up with a form of journalism that would address it at its roots.

What emerged was a journalism that sought to tap into civic life so as to connect the journalism to actual concerns of community members and engage people in thinking about how they might address their issues.

Some editors, such as the Washington Post’s Len Downie and the New York Times’s Howell Raines, denounced civic journalism, saying its outreach to citizens threatened journalistic independence and objectivity. Other top editors, such as Pew Center Advisory Board Chairs Tom WInship, editor of Boston Globe, and Jack Nelson, Washington Bureau Chief of the Los Angeles Times, supported it

“So much of the criticism argued that we were ceding to the public our agenda-setting responsibility and/or losing our independence. But that was an either/or frame,” said Steve Smith, a former Knight-Ridder executive who led newsrooms in Colorado Springs, Spokane, Wash., and Salem, Ore. “I always believed that what we were trying to do was partner with the public on agenda-setting that produced journalism that mattered to people, that was an authentic reflection of civic life but still embodied the best of traditional journalism and especially its values.”

The philosophical underpinnings of civic journalism are as valid today as they ever were, he said. “We were derailed by opposition from head-in-the-sand traditionalists whose refusal to see beyond their ‘traditional’ practices was paired with an inability to see and anticipate the other factors that have brought mainstream journalism to today’s sorry pass.”

“And we were derailed by economics. I know I spent less time thinking about journalism as I systematically downsized three newsrooms,” said Smith, now a journalism professor at the University of Idaho.

Techniques involved listening to how the communities framed their problems and convening conversations about how they might be addressed. Yet major differences emerged between civic journalism and traditional investigative journalism.

On the investigative front, projects such as “The Deadliest Drug: Maine’s Addiction to Alcohol” or the Charlotte Observer’s seminal “Taking Back our Neighborhoods” (TBON) that explored the root causes of crime leveraged the best of data journalism paired with community input on framing issues and solutions.

Civic journalism’s enterprise projects, however, “didn’t have bad guys attached to them,” Friedland said. Rather they mined the muddy swamps of tough issues enveloping communities. These projects focused less on measuring the nature of the engagement and instead focused on outcomes.

When the Wisconsin State Journal tackled a minority-student achievement gap in its 1995 “Schools of Hope” project with reporting and public involvement, “the racial achievement gap in elementary [schools] was virtually eliminated,” said Denton, who led the project.

While the three-year-old TBON project led to measurable community recognition, the journalism more importantly led to structural changes involving absentee landlords and reforms in community policing that were partly responsible for a drop in crime, according to Friedland’s research.

The most systematic and deepest research into civic journalism was undertaken in 2002 by Friedland and PhD student Sandy Nichols. The Pew Center opened its files on 651 civic journalism projects that had applied for funding or for recognition in the Knight-Batten Awards for Excellence in Civic Journalism between 1994 and 2001. For months, Nichols read every project and coded them by engagement strategies, outcomes and story frames.

You can read the final report or the executive summary. Among its highlights:

Did civic journalism fail or did the name just go underground? I plead guilty to putting civic journalism in a time capsule in 2002 when I transitioned the Pew Center’s work to new funders and a new nonprofit, J-Lab: The Institute for Interactive Journalism. I wanted to continue nurturing civic innovations, mostly in the digital arena. I also wanted to be freed of the many journalistic distortions around the name “civic journalism.”

But it may be time to dig out the time capsule and come up with Civic Journalism 3.0. CUNY’s Social Journalism program, for one, has embraced many of its tools and techniques. Journalism educators still use their dog-eared copies of “Tapping Civic Life,” a joint Pew Center/Harwood Institute project on how to listen in communities. Moreover, there seems to be revived interest from editors.

Said Friedland, “How to allow multiple and diverse voices to see themselves in our news reports? Those questions were bedrock in the ’90s and they are bedrock now.”

Steve Smith recalled how he spoke about civic journalism recently to the Washington Newspapers Publishers Association, which represents small daily and weekly papers in the state. “Those folks absolutely got it,” he said. “No push back on ceding our agenda-setting responsibilities. No push back on giving up our independence or objectivity. Just lots of questions about how to do what they do more effectively. It was a blast.”

Jan Schaffer is the former executive director of the Pew Center for Civic Journalism, which she spun off to direct J-Lab: The Institute for Interactive Journalism.