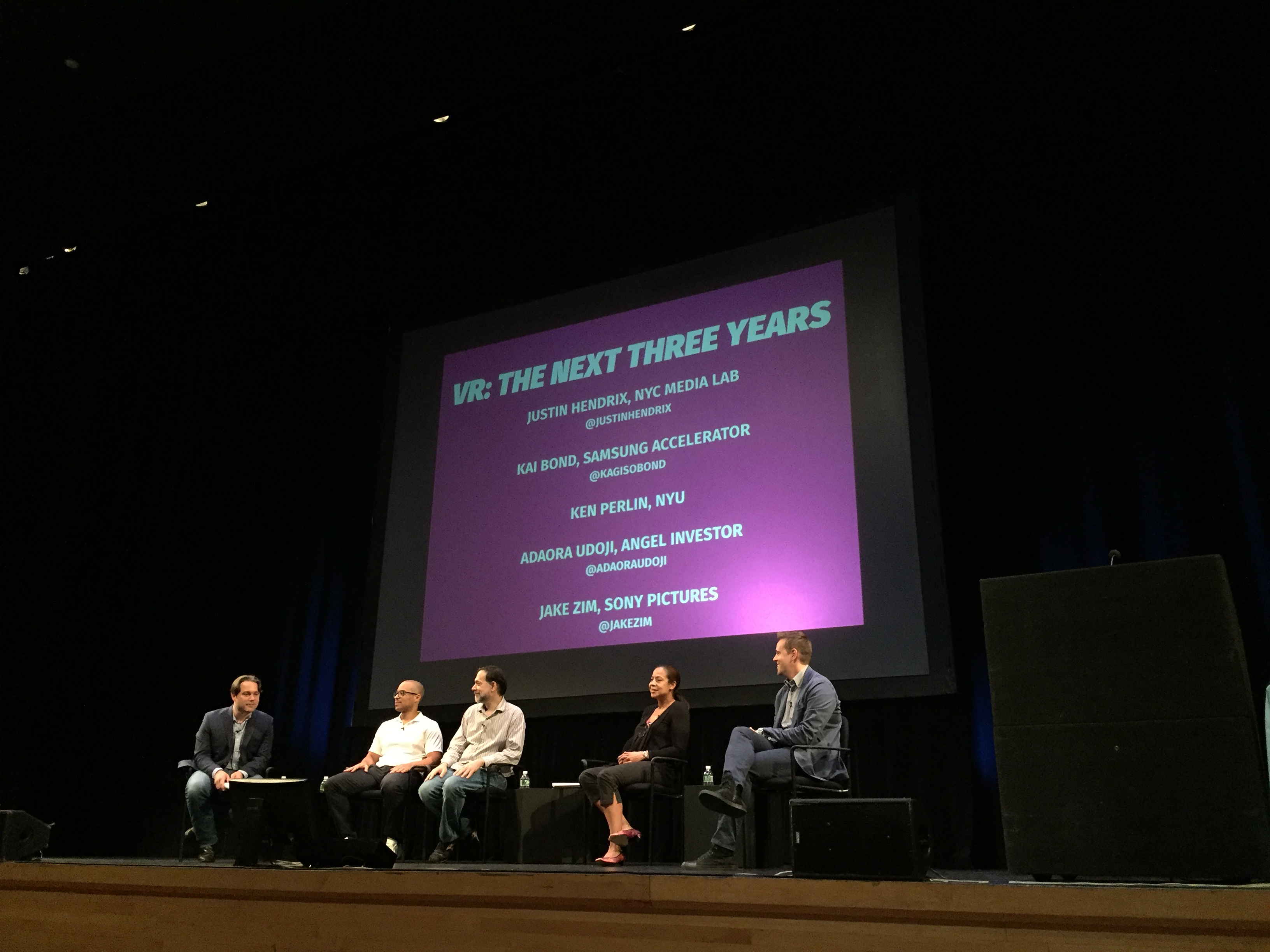 In the future, virtual reality experiences won’t need to be so “high-end” – and they will have applications far beyond entertainment.

“This is a fundamental medium,” NYU Professor of Computer Science Ken Perlin said as part of a panel at the NYC Media Lab Summit. “This is like book printing. This is like the web. It’s not about a particular use, it’s about all uses.”

During the “Virtual Reality: The Next Three Years” panel discussion at last week’s summit, speakers were asked to share their predictions for the immediate future of virtual and augmented reality.

Panelist Jake Zim, the senior vice president of virtual reality for Sony Pictures Entertainment, oversaw the development of the Ghostbusters virtual reality game currently open at Madame Tussaud’s wax museum in New York City, a VR highly praised experience. He said within the next few years, there will likely still be opinion pieces about how virtual reality isn’t taking off, but “it’s all noise.”

There is a commercial place for VR, he said.

Perlin lauded the success of experiences such as Ghostbusters and the Pokemon Go augmented reality game, but also said high-end experiences are “the only thing you can do in 2016.”

“It’s like where the web was in 1995 and you had to go to an internet cafe,” he said. “Eventually there were no internet cafes because you had it at home and then you had it on your phone.”

From real estate to medicine, VR will likely be found in every industry, NYU adjunct professor and angel investor Adaora Udoji said.

“Any sector or category that you can imagine, there is somebody who’s taking a look at how this new technology may make a machine more efficient, may provide something new or different, some component that that industry hasn’t had access to before,” she said.

Kai Bond, the general manager for Samsung Accelerator NY, noted that there are already “real practical VR solutions impacting individuals’ lives” in the fields of autism and post-traumatic stress disorder.

For example, psychologists are using VR experiences as a form of simulated exposure therapy to help military veterans heal from PTSD. And the National Autistic Society developed a VR experience that allows the user to feel what it’s like to be an autistic person who is overwhelmed by too much stimuli in the surrounding environment.

VR Applications for the News Industry

The Nordic Aurora photographed with a Ricoh Theta, by Ken Usami. Used with permission from Ricoh.

Panelists touched on the applications of virtual reality in the news industry, as well. Udoji, a former broadcaster, said she wished she’d been able to use a Ricoh Theta when she covered the devastation left by Hurricane Katrina. The Theta is a small, handheld camera that allows the user to photograph an entire 360-degree space with one press of the shutter button.

Udoji also hailed the work that the Associated Press has done with virtual reality. In a little more than a year the news agency has produced 20 virtual reality and 360 videos, all of which live on a dedicated webpage. Topics are varied: they include an explainer about Alzheimer’s Disease, the New York Philharmonic’s summer performances, the premiere of Star Wars and a migrant camp in northern France.

“It’s one thing to hear a reporter talk to at you or to read something online or the paper,” Udoji said. “But it’s another thing to experience it in three dimensions.”

When asked what drives interest in virtual and augmented reality as a medium, Perlin’s answer was direct: the desire to communicate with others.

VR And AR Featured During the Demo Showcase

During the Research & Prototyping Showcase, some of Viacom NEXT’s VR Fellows presented their projects. Six fellows from four NYC universities were chosen to work on their individual storytelling projects for eight weeks over the summer; they were provided access to VR equipment and professional mentors.

From a live Shakespearean production staged in virtual reality to an interactive program that allows the user to be a DJ, there were almost two dozen virtual and augmented reality projects featured in the Demo Expo, where hundreds of students had the opportunity to showcase their work.