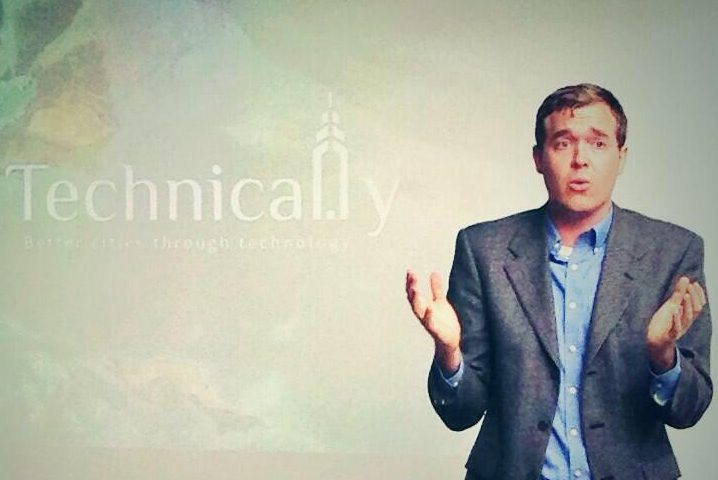 In the news this week, AT&T is making an ambitious push to buy Time Warner for $85 billion — will regulators approve the deal? And can a new cheap streaming service called DirecTV Now prove that AT&T won’t raise prices? The New York Times buys The Wirecutter, getting deeper into affiliate links. Twitter announces decent earnings, another round of layoffs, and the coming shutdown of its Vine video app. Politico’s Alex Weprin joins us to talk about the fierce competition in streaming video services. Our Metric of the Week is fact-checking metrics, and Technical.ly’s Christopher Wink tells us how tech news can go local.

"It was hard and stressful and scary. We were very unsure it was real." - Christopher Wink on what it was like in year one of his media startup

Christopher Wink is the co-founder and Editorial Director of Technically Media, a company that publishes local tech news and events in the Technical.ly network and, as of fall 2015, social impact site Generocity.org.

Alex Weprin is deputy editor for POLITICO Media. He also writes about TV. He has served as the editor of Mediabistro’s TVNewser blog, and his writing has appeared in Broadcasting & Cable Magazine and Variety.

AT&T Goes for Time Warner in a Mega-Deal

AT&T and Time Warner are two companies that have had a horrible past when it comes to mergers, with AOL Time Warner being one of the worst in history. So can AT&T, the giant telecom and broadband company, really match up well with content giant Time Warner — and get regulatory approval? One media analyst told the New York Times that he thought the $85 billion deal had a 50/50 chance of approval. First, let’s look at what AT&T would get from Time Warner: content, like CNN, HBO and Warner Bros. studios. And after AT&T acquired DirecTV last year to create the largest pay-TV company, adding content to those pipes makes all the sense in the world. Especially after Comcast acquired NBC Universal to create its own vertically integrated juggernaut.

And that’s where the problems come in. Regulators were not thrilled with the Comcast NBCU deal, and attached 150 conditions to it, which have not all been kept. As CNET’s Marguerite Reardon noted, Bloomberg sued Comcast for puttings its cable channel in the hinterlands, far away from competing Comcast channel CNBC. When it comes to mega-mergers, politics means everything, and both Donald Trump and Hillary Clinton have spoken out against the deal so far. But all that hasn’t fazed AT&T CEO Randall Stephenson, who announced that they would be releasing a new streaming service called DirecTV Now, with 100 channels for just $35. That jaw-dropping price would undercut Playstation’s service, and offer a lot more channels than rival Sling TV. But the real value of the new service is letting AT&T crow about how it’s lowering prices for consumers. We’ll see if that argument holds water or the deal gets scuttled in the long run.

The New York Times Buys The Wirecutter for E-Commerce

There was a time when affiliate links were a real bugaboo for news publishers. The thinking was that if you put “buy” buttons at the bottom of a book or movie review, then the publication would tend to write positive reviews to drive more purchases, as publications get a cut from those revenues. But The Wirecutter took a different tack with affiliate fees. The startup from ex-Gizmodo editor Brian Lam focused on well-written, deep reviews of tech gadgets that they liked, and used affiliate fees to bring in money instead of annoying online ads. That strategy has paid off big for Lam, as his company, which includes The Wirecutter and a newer site for home appliances, The Sweethome, was bought for $30 million from the New York Times.

The Wirecutter had already collaborated with the Times on some reviews, and Times CEO Mark Thompson said that “their service-focused guides align with the Times’ commitment to creating products that are an indispensable part of our readers’ lives.” It’s interesting that the site that Lam left, Gizmodo, also went down the path of e-commerce and affiliate links, and that’s what made it so attractive to Univision in its recent sale. Lam really went all in on “slow news,” trying to do the deepest, most evergreen reviews rather than chasing clicks with 30 stories posted per day. Now, the question is what will happen to his sites as part of the New York Times. Will they fall behind a paywall? Will they lead to more affiliate links on other Times’ stories? We’ll see, but it does show that the Times is going to try to win by addition and not just by subtraction and layoffs.

Twitter has had a real roller coaster ride the past few weeks. It put itself up for sale, and had all the main suitors, including Disney, Google and Salesforce, drop out. Now on its own, Twitter reported earnings that beat analysts’ expectations, with adjusted revenues of $616 million, and adjusted earnings of 13 cents per share. Even more importantly, the company saw user growth in the quarter, with daily active users up 7%. A lot of that growth came from live-streaming of presidential debates and NFL games, which were popular. Twitter also announced it was cutting 9% of its workforce, or about 350 people in sales and marketing, to help rein in costs. One of Twitter’s major issues with expenses is stock-based compensation to employees. In the second quarter, it paid out $168 million in those costs, which comes to a whopping 28% of revenues.

All this news cheered Wall Street, which sent the stock up on Thursday by 5% in early trading. But not everyone will be happy. Twitter also announced it was shutting down its pioneering Vine app, which let people post 6-second videos. When it was launched in 2013, Vine was a phenomenon, with Vine creators coming up with a new art form. Unfortunately, that art form didn’t bring in much money for Twitter, which has moved on to live-streaming with Periscope and timely sports and political content. The swift rise and fall of Vine is a cautionary tale for anyone creating a buzzy app that gets a lot of users without working out a business model. As Snapchat and other video services have taken the spotlight, they should be laser-focused on making sure to sustain themselves, and make sure that users don’t jump off for the next big thing.