The Cautionary Tale of Billy Bush and Journalism Ethics 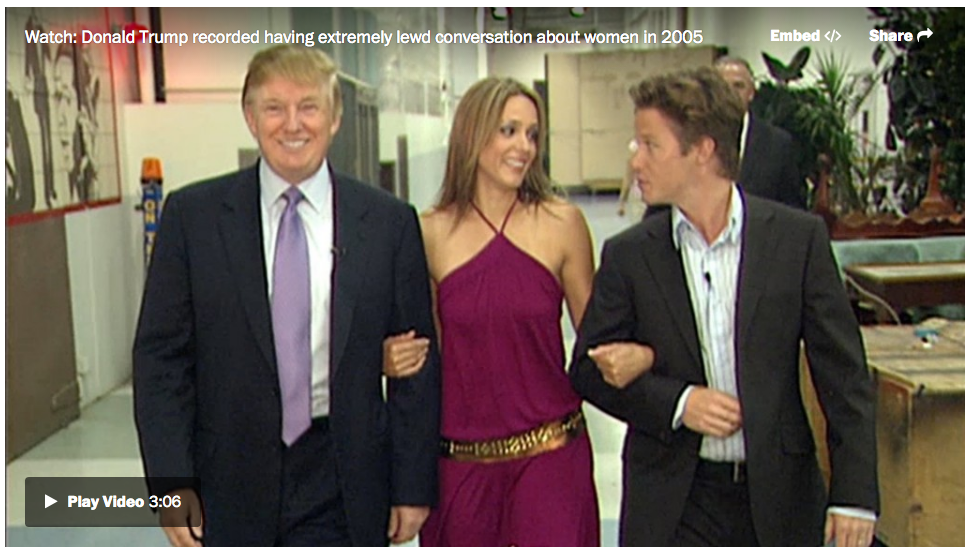 The Washington Post first released the tape of Billy Bush and Donald Trump on Oct. 7.

In a few days Billy Bush went from C-list celebrity to household name, for all the wrong reasons.

Before last Friday, for millions of Americans outside the realm of entertainment talk shows, Bush was an unknown. By Saturday, however, a Change.org petition for Bush’s ouster was already nearing the required five thousand signatures to send to “Today” show executive producer, Don Nash. By Sunday night, NBC had announced Bush was suspended indefinitely from the program.

But beyond the rubber-necking fascination and politics, Bush’s story should serve as a cautionary tale for our modern age of journalism, where social media and reality television have obliterated the line between reporting the news and becoming a part of it.

How did he go from up-and-coming news host to public pariah so quickly?

For starters, Bush violated one of the oldest and most taboo tropes of professional journalism: don’t make yourself part of the news. In two short months, Bush did so twice. In August, his on-air defense of Ryan Lochte’s behavior during the Rio Olympics called his judgment to question. That was in his first few weeks as part of Today’s team.

Then, in the now-viral Access Hollywood video with Donald Trump, he can be seen and heard giggling and egging Trump on, an active participant in a lewd discourse around infidelity, sexual assault, and objectifying women. It was this last bit that was the most damning, for many reasons.

Still from the Washington Post’s release of the now-infamous tape of Billy Bush and Donald Trump.

First, despite a publicized quasi-apology — that he was “younger, less mature, and acted foolishly in playing along” — Bush’s actions were perceived by many to go much further. From the moment that Trump and Bush step off the bus, Bush escalates the situation from lewd locker room banter to action. He facilitates the now infamous hug of Arianne Zucker. Essentially, he moves the dynamic from talk to touching. Thousands took to Twitter expressing their outrage.

That sense of objectification was not lost on Today’s predominantly female viewers, nor should it be on its staff. For a show long-plagued with rumors of misogyny and infighting between hosts, this is an already festering wound. The scandal around Matt Lauer’s alleged role in Ann Curry’s sudden departure in 2012 left many viewers feeling slighted on her behalf and questioning the management’s values. Today viewers don’t want to be sipping their morning coffee and wondering whether Bush’s Access Hollywood indiscretion was the first and only incident, or whether female coworkers and guests might regularly suffer the same type of mistreatment. The fact that he has three daughters made the offense even more distasteful.

The questions of journalistic integrity

For others, a different question nags: one of journalistic integrity. Behind the scenes, there is the issue of Bush’s political allegiances. Over the years, some viewers have asked if his career advanced so quickly because of his relation to the Bush family (Billy is Jeb and George W. Bush’s cousin and George H.W. Bush’s nephew). That relationship alone could strain his ability to be non-partisan in a news setting. It might have been enough for Bush to have recused himself from any election coverage over the past year.

Still the bigger question begs, did Bush actively cover up information he knew would embarrass a presidential candidate? If Bush was aware of the tape’s existence and did not disclose it, that violates standards of journalism; it’s a cut and dry fireable offense.

The official narrative is that the tape came to light early last week, when an Access Hollywood producer discovered it. The network apparently spent the next few days “legally vetting the contents,” and during that time, it was leaked to the Washington Post who released it.

An NBC spokesperson claims that as soon as they saw the tape, they “made the assessment it was undoubtedly newsworthy, we moved quickly and deliberately to get it published and to do so in the most responsible way.”

Yet during that period, Bush remained on the air. At whatever point NBC learned of the tape — whether it was a few days ago or long before — the network at least should have taken steps to preemptively barr Bush from covering Trump in the presidential race.

The line between entertainment and reality

But that brings us back to journalistic ethics and the increasingly murky tension between truth and reality. Former coworkers, Janet Elliott and Sammy Simpson, counter that Bush was simply doing his job: sucking up to celebrities and making their appearances that much more entertaining for the audience. They are quick to point out that he isn’t an old-school, investigative journalist; he was more like an entertainer.

It’s no coincidence that this very same line of defense was used by Trump over the past 12 months. The businessman and former reality TV star has perhaps more than anyone else, eviscerated that line between reality and entertainment. The difference is, where it has so far worked for Trump, the tactic failed for Bush.

While voters may have the final say in determining how much reality they want in their politics, the news industry is fueled by the bottom line of investor and advertising dollars. Public perception and ratings still function as the most powerful metric for any network.

That’s where Billy Bush committed the cardinal sin: he sullied his network’s brand reputation. Ironically, he has become only the latest member of the Bush dynasty to be dethroned by Trump, or in this case, thrown under the not-so-proverbial bus.