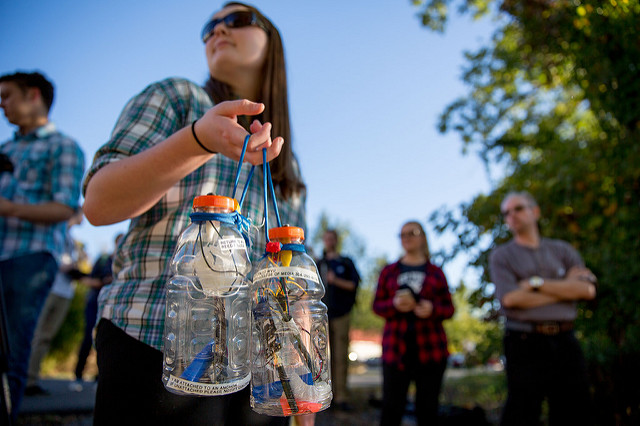 West Virginia University Reed College of Media student Jillian Clemente was in the “Experimental Journalism” class and helped design and assemble the housing (a Gatorade bottle) for the DIY sensors used in the WVU Stream Lab project. Photo by David Smith.

It’s our moment of truth.

My student, Jillian Clemente, and I returned to the Taylor County, West Virginia, stream where just a week ago we submerged a water quality sensor in a Gatorade bottle.

"Sensor journalism should be used as a framework to move scientific discovery, understanding, implementation, and relevance forward in a synergistic way." -Dr. Nicolas Zegre

Now we are retrieving the device to see what data – if any – it collected.

I’m holding the Zoom audio recorder to collect ambient sounds – the leaves crunching under our feet, the roar of the water and Clemente’s reaction when at last she pulls the Gatorade bottle out of the water.

Mud is caked in the bottle top, which was the portion that managed to stay underwater (which means the cinderblock and rope used to hold it down did its job). But we quickly notice a problem: corrosion on the screws that go through the cap of the bottle to allow the device inside to measure conductivity and temperature.

“Maybe you can only put it in once or twice and then it loses its grip,” Clemente said. “Maybe we needed a new Gatorade bottle.”

This was one of several lessons learned in our “Experimental Journalism” class that used DIY sensors to test and report on water quality in West Virginia.

On the heels of a chemical leak into the Elk River in Charleston, West Virginia, in 2014, the West Virginia University Reed College of Media was specifically interested in finding a way to empower regional journalists and the public to be better informed about water quality issues in their own backyard. We also wanted to expose our students to experimenting with emerging technology.

Students brainstormed ways to keep the sensors submerged in the river. They used cinderblocks and marine rope to anchor the sensors while still allowing some of the six sensors to bob at the water’s surface. Photo by David Smith.

Funded by an Online News Association Hack the Curriculum Challenge Grant, our project used the RIFFLE, or Remote Independent Friendly Field Logger Electronic, to gather data on a waterway’s conductivity and temperature. Don Blair, a fellow at Public Lab and a research affiliate at MIT Media Lab, helped prepare the sensors for our students and was there when students deployed the sensors into the Monongahela River. John Keefe was with the students, too, on “deployment day.”

“I wanted to see if a bunch of people who had really not played with this set up could do something as relatively sophisticated as collecting data about conductivity,” Keefe said.

“There was a lot of hand holding, but we managed to build six of these devices and put them in the water. That was pretty amazing.”

The class was co-taught by three Reed College of Media faculty — Associate Professor Dana Coester, Professor John Temple and me.

This class provided an opportunity to experiment with more than just sensor journalism. Everything was an “experiment” for the students and faculty, from how to grade an ongoing project in which the outcome was uncertain, to using Slack as the primary channel of communication and content-sharing.

Students were prepped in advance about what the experimental class would entail. For example, we emphasized that failure is always possible and often necessary toward achieving your final goal. In an education system that trains students to be averse to failure, this can be tough for them to accept – and to be honest, for teachers, too.

The class engaged scientists from the West Virginia University Davis College of Agriculture. These water research experts were invaluable throughout the project, teaching our students about experimentation and about water pollution in West Virginia.

Dr. Nicolas Zegre, associate professor of forest hydrology at WVU, was one these experts. He says sensor journalism can help fill a gap between scientists and the public.

We learned that collaboration with scientists is critical to conducting sensor journalism responsibly.

“They (scientists) were there from the beginning, letting us know what the issues were and what we could and couldn’t expect,” Keefe said. “I get the sense that in academe different departments don’t often comingle, but they did with this project.”

Ultimately, the water sensors placed in the Monongahela River worked: They recorded time-stamped conductivity levels and temperature. Some communicated this data in real time. The data showed similar changes in conductivity across six different sensors, including temperature spikes. However, students were unable to determine what caused these changes.

Had there been a significant spike in conductivity at the same time each night, for example, then this could have been a clue for students to investigate. Keefe admits this is a backwards approach to journalism – have a device to use, then find a story.

But this approach was OK for the purposes of this experiment, because the project did two other very important things: It demonstrated that these do-it-yourself sensors actually work, and it made journalism students more tech savvy with an emerging reporting tool.

“It showed that even journalists with little to no technology knowledge are capable of understanding and working with new, innovative tools to help us find and write our stories,” said student Jillian Clemente.

Experimentation continues out of the classroom

With a better understanding of how the sensors worked, the project continued in the spring with a tighter story focus. Students discovered that a nearby community group was concerned that a coal mining operation might be polluting a local stream. The small stream flows into a larger waterway where over a million dollars has been spent fixing water pollution from coal mining that took place in the watershed years ago.

The students conducted interviews with multiple sources, including scientists, community members, industry and government officials and deployed sensors in the stream twice. The first time, the sensors collected some data but not enough. And the second time, the corrosion from water seeping into the bottle cap made the data wonky and unreliable.

Without the sensor data, the students still produced a story for West Virginia Public Radio, using the traditional means of reporting – interviewing and reviewing data collected by other sources.

“I know failure is an option in all cases, but you hope for the best,” Clemente said.

“You just have to grind your teeth a little bit and do better next time,” she added.

Even though the sensors did not produce helpful data for their story, the process of using the sensors helped the students report.

In this instance, technology helped these students form a deeper relationship with their story.

The end is just the beginning

The project ended with a community workshop. Journalists, community group volunteers and scientists gathered to learn more about sensor journalism and our project in particular.

The workshop turned out to be a launch pad instead of a capping-off event. Productive discussions and thoughtful analysis helped us chart a new path for another sensor journalism project that will launch in the spring 2017, because there are certainly more stories worth reporting through sensor journalism.

“This type of reporting has the potential to provide an early warning system for communities,” Keefe said. “For a journalist interested in detecting issues that aren’t being tracked, suddenly they might have access to data that otherwise wouldn’t exist.”

WVU Stream Lab was administered by the Online News Association with support from Excellence and Ethics in Journalism Foundation, the Robert R. McCormick Foundation, Knight Foundation, the Democracy Fund, and the Rita Allen Foundation.

Emily Hughes Corio is a Teaching Assistant Professor at West Virginia University’s Reed College of Media. She teaches courses in audio and video news writing and production and sports and adventure media production. Corio helped plan and implement the Stream Lab project during the 2015-2016 academic year and co-taught the “Experimental Journalism” class. Corio worked in public media for a decade before joining the journalism faculty at WVU in 2011.