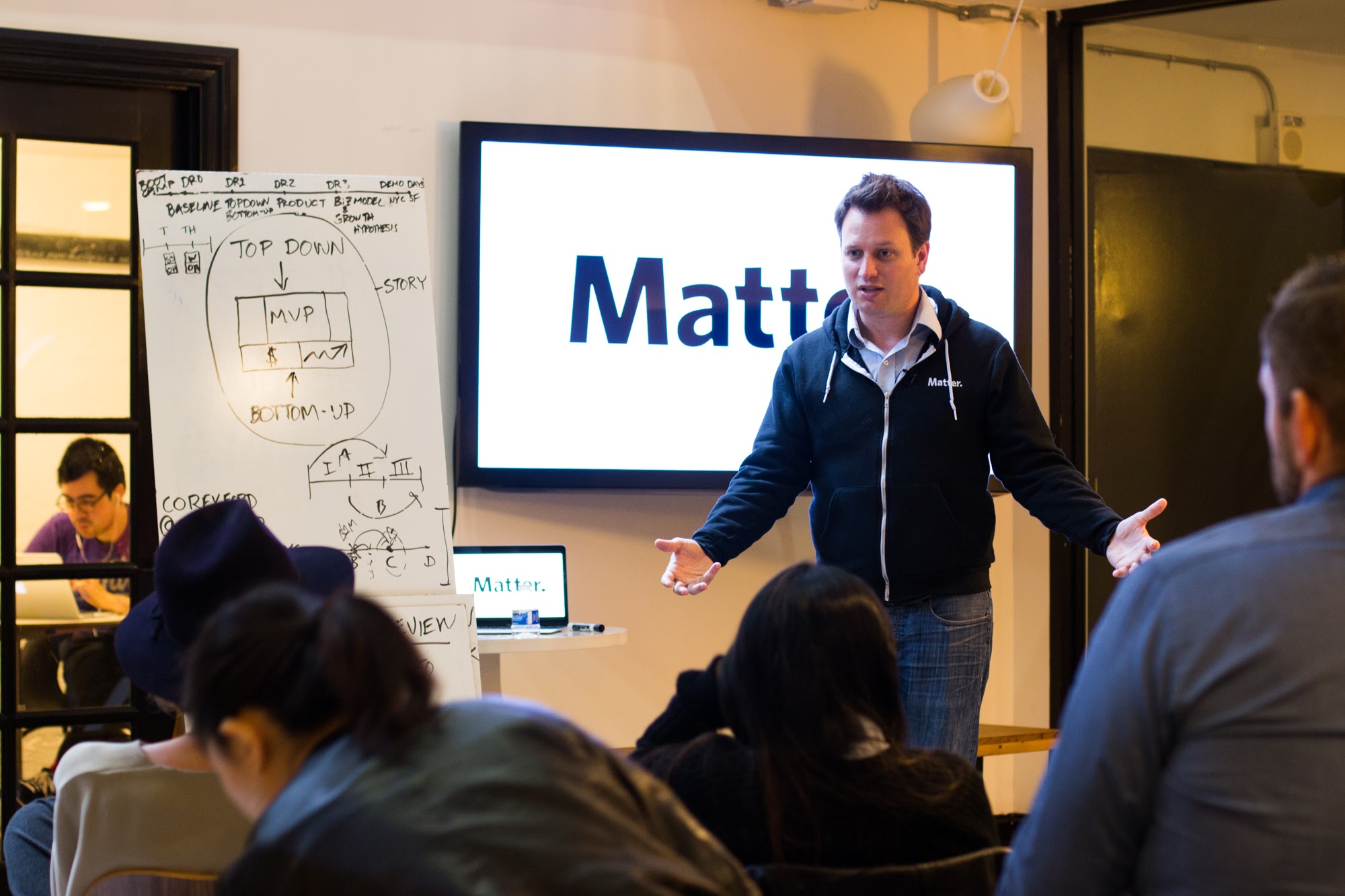 Corey Ford of Matter joins the podcast this week to discuss what it takes to thrive as an entrepreneur. Photo by Rachele Kanigel.

In the news this week, Facebook fires its news editors and puts the algorithm in charge. (You can guess how that turned out: not very well!) Vice Media might be hip and cool, but it’s very uncool in its treatment of freelancers. And social media is now the top news source for 18 to 24-year-olds, according to a new report from Reuters Institute. Politico’s Joe Pompeo joins us to talk about a potential new media outlet from Donald Trump. Our Metric of the Week is “scroll depth” — how low can you go? — and we go one-on-one with Matter’s Corey Ford.

"Headline for everybody out there: Your ideas kind of suck. They are good starting points to take action off of and to learn and iterate." - Matter's Corey Ford on start ups

Corey Ford co-founded Matter in 2012 with the mission of using the startup accelerator model to drive innovation in media. Corey began his career in public broadcasting as a producer on 17 films for the PBS/WGBH series FRONTLINE, winning an Emmy and a duPont-Columbia Gold Baton Award.

Do you think the Pope gave Mark Zuckerberg any advice on influencing billions of people when they met earlier this week? Maybe he told Zuck not to give up on humanity. Because Facebook took its problem with Trending Topics and made it worse by firing a team of New York contractors who were supposed to be filtering them. The social giant decided to put the algorithm largely in control, which led to Trending Topics featuring a false story about Megyn Kelly being fired from Fox News for supporting Hillary Clinton. Thousands of shares later, Facebook removed the post. Earlier this year, the editors behind Trending Topics were accused of having a liberal bias by one of its former editors, and this change was seen as a response to that. But that bias has been questioned by other former editors and even Facebook itself.

Slate’s Will Oremus got in touch with 3 of the editors who were fired, and not surprisingly, they didn’t think the algorithm was ready for primetime. One said that, “you click around, and it’s a garbage fire.” Even though tests of the algorithm didn’t work well, according to a former editor, they decided to just get rid of editors and turn on the algorithm full blast. Oremus says it was like “throwing out the babies and keeping the bathwater.” During his trip to Italy, Zuckerberg was asked by a student whether Facebook would become a news editor. His response was that Facebook is not a media company and remains a tech company only. “We do not produce any content,” he said firmly. That might be true, but any aggregated list of trending news or topics, whether edited by an algorithm or human, will always appear to be content. And if Facebook is going to be a dominant player in advertising and mobile advertising, then they are firmly in the media business, like it or not.

Vice Not So Cool for Freelancers and Fixers

Vice has built its reputation as being bold and brash. And that reputation has helped the company raise hundreds of millions of dollars in venture capital and investments from legacy media companies. But that money isn’t making its way into the hands of freelancers that write and produce for Vice Media, according to Yardena Schwartz, who wrote a scathing piece for Columbia Journalism Review. Schwartz herself had a bad freelancing experience with Vice when her story about the Palestinian uprising was killed because the editor had a family emergency. The company also has a problem with paying fixers. French journalists Maya Vidon and Karine Barzegar said they were contacted by a Vice producer to help with coverage surrounding the Charlie Hebdo shootings but when they asked for compensation the producer couldn’t give them a straight answer. Barzegar realized Vice was up to no good, but said that “if I was a 23-year-old, young, budding journalist who’s dying to work for Vice, I probably would have killed myself to get everything they wanted. And that’s a problem.”

This isn’t the first time Vice has been criticized for pay issues. Gawker’s Hamilton Nolan wrote in 2014 about the low pay of Vice employees, especially producers who were paid full-time salaries below $30,000. And Nolan also found Vice employees who questioned honcho Shane Smith’s promise about sponsored content — that no brands would have editorial control. Quite the opposite. Some brands such as Nike did exert control, and videos and stories were changed at the behest of sponsors, according to Vice employees. Vice responded to the Gawker story with invective, and by giving details on its benefits program and Stock Appreciation Rights program that started only in 2013. Let’s face it. Everyone wants to work at the hip upstart media company that could get bought or go public at a massive valuation. But if that comes at the cost of low salaries and mistreated freelancers, then what’s the point?

Whether or not Mark Zuckerberg considers Facebook a media company, more and more people are turning to social media for their news. A new report by the Reuters Institute for the Study of Journalism at Oxford University reveals 51 percent of people around the globe use social media once a week for news. And the headline stat is that 28 percent of 18 to 24 year olds use social media as their main source of news vs. 24 percent who rely on TV. And out of the social platforms where all users get news, Facebook was tops at 44 percent, with YouTube at 19 percent, and Twitter at 10 percent.

While a lot of journalists are crying bloody murder about algorithms picking the news on Facebook, the study found that “young people are more comfortable with algorithms vs. editors.” And for the survey as a whole, 36% liked news chosen by algorithms vs. 30% by human editors. While many publishers are racing to serve as much video as possible, the study found that more than three-quarters of respondents rely on text for news. Many people find video inconvenient, get their news while at work, and find pre-roll ads on video to be annoying. (Yep, annoying seems to work best for online ads yet again.) The study overall is a fascinating read. Sure, we figured young people and Americans in general were now getting more news than ever on social media and Facebook, but the findings about algorithms and video are a great way for us to realize the masses don’t live in our media bubble.