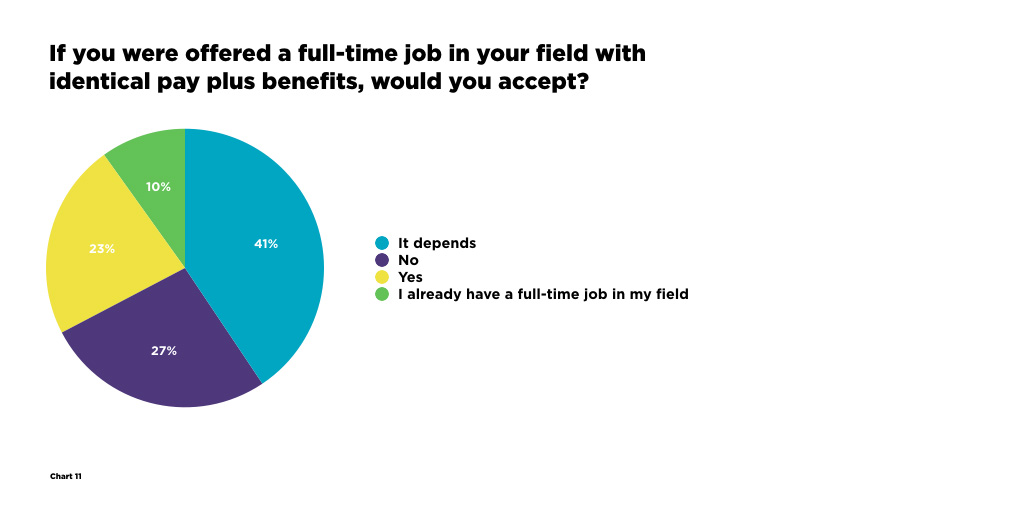 There are a lot of studies out there about freelancing—but not many about freelance creatives. Here at The Freelancer, that’s who we are: writers, editors, photographers, designers, and more, all pursuing our passions while trying to make a buck.

So we decided to create a recurring study about, and for, those freelance creatives. Last year’s inaugural edition covered a variety of topics, including workflow, unions, and the best and worst parts about freelancing.

This year, we ran many of the same questions in order to gauge any change in the community. But we also introduced a swath of new topics such as the pervasiveness of branded content, a more detailed demographic breakdown of income, and the importance of social media and technology. Here are the results.

We sent out a 42 question survey through Typeform this April to our email list and our social channels to gauge how our audience—and freelance creatives generally—are managing the freelance hustle. The results were taken from a month-long period. The questions ranged from the basic, about income and client type, to more complicated, dealing with issues like late payment and the importance of social platforms.

We received 1,119 responses in total. Of those 1,119, 88 percent are writers, 34 percent are editors, and 24 percent are content marketers or strategists. Other types of creative such as photographers, videographers, made up 19 percent of the total. As you can see by the overlapping percentages, respondents could give multiple answers. There were 2,167 total responses, which shows how many freelance creatives diversify their incomes with multiple skills.

Given our content, it’s not too surprising that the majority of our respondents partake in freelance writing—we tend to focus more on writing than anything else, though we hope to change that in the future. But for now, it’s important to remember that these results overwhelmingly represent writers more than any other type of freelance creative.

Geographically, the respondents are mostly from the United States. U.S. citizens accounted for 66 percent of the total respondents. Canada and the UK came in second and third, with 8 percent and 6 percent, respectively.

Ethnically, 78 percent of respondents are white. That’s 15 percent more than U.S. demographics, where non-Hispanic whites make up 63 percent of the total population. Asian ethnicity was second with 7 percent, and black third with 5 percent. 46 percent are married and 28 percent are single; in the U.S., 50.6 percent of the population 16 and above is single.

73 percent of respondents are female, which aligns with previous numbers that have suggested that females heavily outnumber males in the freelance creative community. Not surprisingly given the education numbers, 61 percent of the total are between 25 and 44 years old. Only 53 respondents are between 18 and 24, which further suggests that having college degree is key to making it as a freelancer.

Besides the demographic results, our questions teased out some noteworthy results on some of the biggest issues facing freelancers.

—76 percent of freelancers do it by choice. Despite the inherent complexities of freelancing—wage instability, lack of benefits, tax complications, and so on—creatives largely go freelance because they want to, not because they need to.

—Late payment may not be as huge of an issue as organizations like Freelancers Union make it out to be. 22 percent of freelancers said late payment hasn’t affected them at all, and on a 0–10 scale from “It hasn’t affected me at all” to “It’s affected me significantly,” 3.68 was the average response. In reality, the biggest issue may simply be securing enough work: 49 percent of respondents named that their biggest challenge.

Overall, 46 percent of freelancers make less than $10,000 a year. However, 41 percent of respondents only freelance part-time, which skewed the numbers significantly (see below). Our results suggest that freelance creatives have a relatively similar income distribution as the total U.S. labor force.

Via the U.S. census

Males make slightly more money than females, despite being outnumbered by more than two to one. The gap isn’t as large as some previous studies have suggested, but it is present.

We didn’t see much difference in income between freelancers who work mainly for brand clients and agencies compared to media companies or an even mix of both. A smaller percentage of those who who worked mainly for media companies make less than $10,000 a year, but a quadruple amount of those who work with a majority of brand clients make more than $100,000. This suggests that it can be difficult for the average freelancer to break a high income threshold without brand clients.

Why freelance, and how much?

The number one reason people decided to go freelance was for independence (60 percent), followed closely by flexibility (also 60 percent), greater opportunity (38 percent), and financial gain (32 percent). “Other” made up the remaining 8 percent.

As social media has become more and more important for media companies and brands, so, too, has it for freelancers. While 48 percent of respondents regularly use a professional website, 65 percent said they have social media profiles they regularly use for their work.

On a 0–10 scale, freelancers on average rated social media a 6.26 in terms of importance, though 10 was given the most of any number.

In terms of how freelancers receive the majority of their payment, online platforms like PayPal came in third behind direct deposit and mailed checks, though they still made up 30 percent of the total. Digital work platforms (such as Contently) faired fairly well, however, coming in second for how freelancers find work online. Of course, our association with Contently may have biased the results.

Freelance creatives have always done work for corporations and agencies, but with the rise of branded content like native advertising and content marketing in the past few years, the opportunities for freelancers have only grown.

But how many creatives are really creating content for brands, and why? According to our survey, 67 percent of freelancers have created content for brands in the past year. It’s important to take this result with a grain of salt: We are a blog run by a content marketing technology company, and many of our readers do work with Contently. Still, the results suggest that creatives—and writers in particular—don’t rely only on media companies for their income.

The majority of respondents either do an even mix of work between media companies and corporate clients or work more for media companies, as you can see in the chart below.

We concluded the study with one important question, and one silly one. For the former, we asked whether freelancers would take full-time job in their field with identical pay, plus benefits.

Compared to last year’s results, there was a downtick in freelancers who would stick it out over taking a full-time job. Excluding those who already had a full-time job in their field and freelanced on the side, 25 percent said “Yes,” compared with 30 percent last year.

It’s hard to explain the decline, besides simple variance, though the result aligns with the drop in freelancers who saw their pay increase and who are optimistic for the future.

On a more fun note, we also asked freelancers whether they would date a fellow freelancer. In the past we’ve written about the difficulties of living with another freelancer, but it didn’t seem to detract our respondents, as you can see below.

To those who said “No way,” we’re assuming you’re either already hitched or have had a bad experience. Either way, our condolences. Here’s to a brighter year.