Meet the Bots Reporting on the Republican and Democratic Conventions 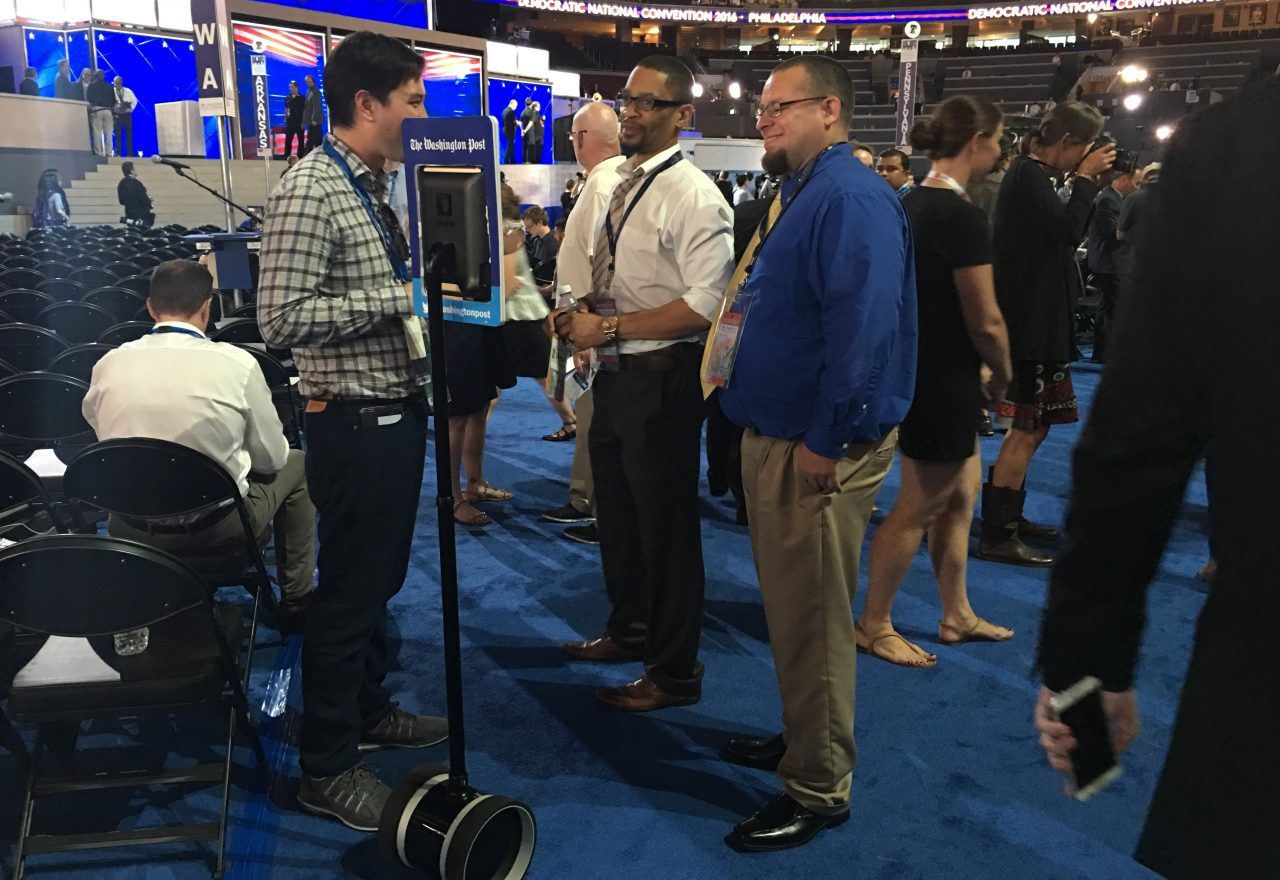 Ryan Kellett of the Post (left) with the Post's bot. Photo by Laura E. Davis.

This year at the Republican and Democratic national conventions, there are new reporters on the ground. Yes, surely, there are new human journalists (including the ones I’m leading from the University of Southern California), but there are also those that are not human and are not journalists. They’re the eyes and ears at the conventions powered by bots.

Click to the image to read the entire series.

The Washington Post and BuzzFeed News are both using bots to complement their reporting at the conventions. The Washington Post partnered with Twitter and Double Robotics to create a roaming tablet on wheels that automatically distributes Periscope streams and interactions with convention-goers in Cleveland and Philadelphia. BuzzFeed’s BuzzBot uses Facebook Messenger to tap into convention attendees for photos, reactions and opinions.

Both bots expand what the news organizations can deliver from the conventions and open new avenues for storytelling.

“It’s transformative in good and challenging ways,” Jeremy Gilbert, the Post’s director of strategic initiatives, said. He and Ryan Kellett, the director of audience growth, let me tag along as the Post’s bot (essentially an iPad on wheels) roamed the hall on the first day of the Democratic convention.

Following the bot is like being with a celebrity – people turn, take pictures and follow you around. When the bot comes up to them, they are typically delighted to interact.

“I think it’s fascinating how people are drawn to that robot,” Kellett said.

The novelty of the tool captures delegates’ unfiltered enthusiasm. At one point on the convention floor as I stood by, a delegate leaned in, pointed at the screen and declared his support for: “Hillary. Hillary! Hillary! Hillary!”

The Post also embraces use of the bot for a raw behind-the-scenes experience. The bot was streaming as Gilbert and Kellett figured out how to get to the DNC’s Studio 2016 in the Wells Fargo Center.

Without the bot, Kellett said, the Post’s audience “wouldn’t see … a very authentic part of what people here really get.”

Another thing you see less of in typical convention coverage: parties. That’s where the other Post robot comes in. It’s stationed at the paper’s event space at both conventions and uses Twitter’s Challenger app to interact with party- and panel-goers and tweet out photos, videos and gifs from @PostLive.

The Challenger app was created by Twitter for its media partners.
Niketa Patel, Twitter’s news partnerships manager, said that the combination of the roaming robot and Periscope “to deliver on-the-ground storytelling and engagement … is bound to be the start of this robot’s remarkable journey.”

And indeed Gilbert and Kellett have ideas for how they can expand on robot reporting.

“We’d love to get at all kind of ways autonomous vehicles can tell all kinds of stories,” Gilbert said. The robot could go places humans can’t, or allow reporters to conduct a new kind of remote interview.

Then there’s the way people react to the robot – their fascination and unfiltered reactions.

“How do we take that and really understand the psychology behind it?” Kellett asked.

BuzzBot is aimed at people attending the conventions and collects user-generated content (disclosure: I used to work for BuzzFeed News, but I had no knowledge of this project). After you add the bot on Facebook Messenger, it sends you questions to determine your location and your relation to the conventions.

Once it knows you’re at the conventions, as it did with me, it will ask you for reactions to speeches, for photos of things like merchandise or hats or for video of something that happened on the floor, or to confirm reports it’s getting elsewhere.

You’re helping the bot out, but it also helps you. Sometimes its solicitation of material is a tipoff to news, and it goes out of its way to try to make your convention-going experience more enjoyable. I got an invite to a BuzzFeed podcast live show, a heads up about a bar where people were gathering in Cleveland and travel tips. The day after the Republican convention ended, it warned travelers to get to the airport extra early. And on the first day in Philly, it let you know the subway was the best way to get to the Wells Fargo Center, which is a trek from downtown where other convention events are happening.

All of this is coming to you via push alerts, and while I, as a former mobile editor, admittedly have a high tolerance, I didn’t find them the least bit annoying. I was excited to help the bot out, and I truly appreciated the tips.

The key? Human intervention and human language. The push alerts are written in a conversational tone, to the point where I found myself wanting to send it niceties like the “Thanks!” you see above, even though I knew I wasn’t always talking to an actual person.

But sometimes I was. The bot is creating a “feedback loop” with BuzzFeed’s newsroom, Poynter reported in announcing the bot, and I can confirm someone is watching.

As bots continue to expand into reporting, there’s no need to fear a takeover. They’re merely there to help us. It’s still humans who know best.

Clarification: This post has been updated to better clarify which product Niketa Patel was referring to in the “Behind the Scenes” section.

Laura E. Davis is an assistant professor of professional practice and the digital news director of the Annenberg Media Center at the University of Southern California. Prior to joining USC, she was a mobile news editor at BuzzFeed News, the deputy mobile editor at the Los Angeles Times, an editor at Yahoo News and a reporter at The Associated Press.