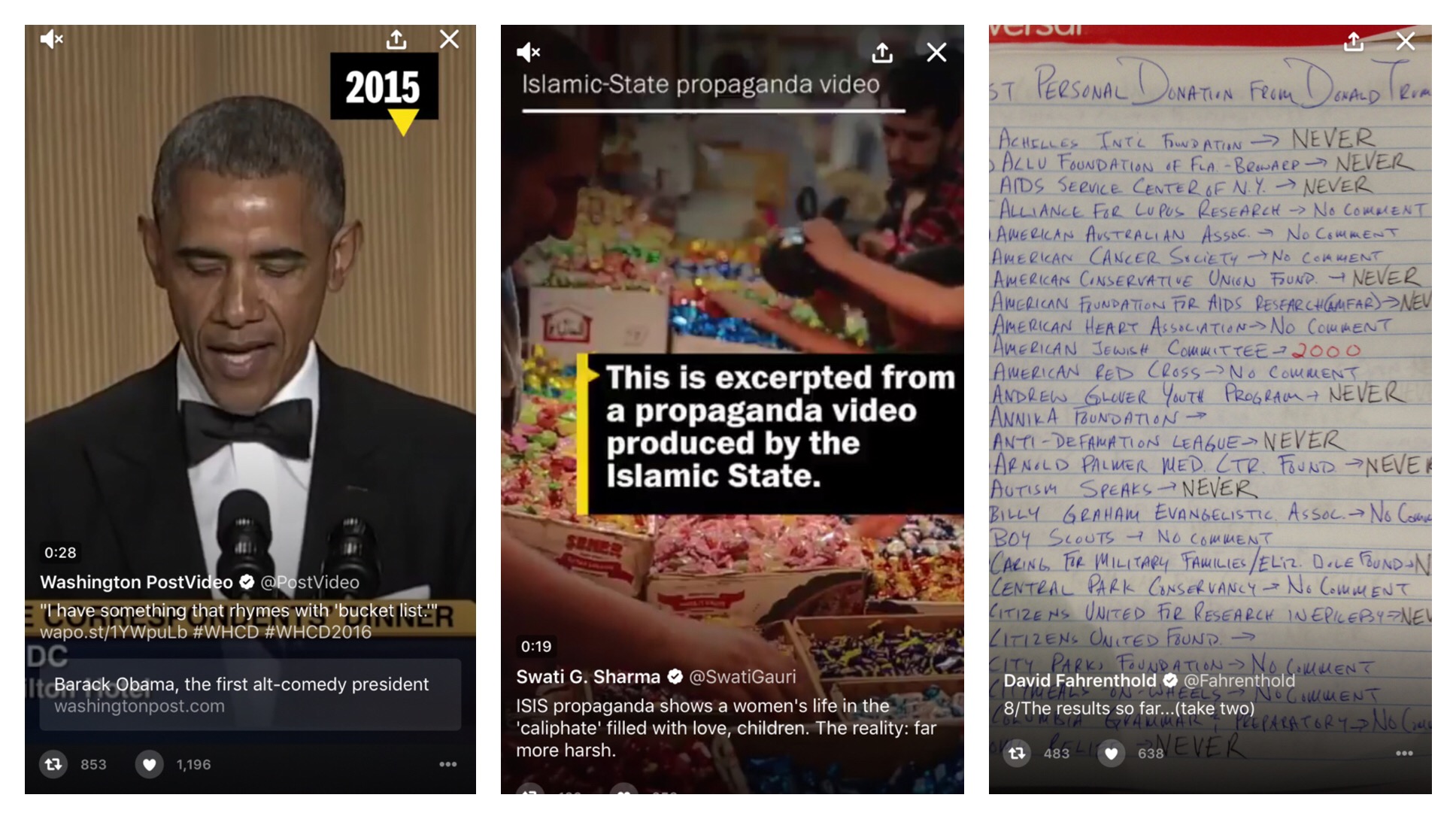 It’s not just a modern twist on an old idiom. It’s also good advice for journalists who use Twitter as one of their main platforms for engagement, and for anyone who wants to take advantage of the Moments tool.

It’s been less than a year since Twitter launched its Moments, one of the first in a flurry of updates for the platform that’s aiming to keep and grow its user base. Twitter dubbed it a tool to see “the best of Twitter in an instant.”

It’s also become the most clear argument that a series of tweets, or a tweetstorm, can be a storytelling device, complete with narrative, sourcing and multimedia.

So when a journalist “tweets for the Moment,” what that really means is, “Tweet like you’re telling a story.” That always leads to better, more thoughtful tweets with the purpose of serving the journalism.

Last fall, The Post published a stunning longform piece from reporter Kevin Sullivan on life under the Islamic State.

To highlight this huge reporting effort, The Post’s foreign editors seized on the Twitter Moment launch in October, pushing our staff to create a series of tweets that told a narrative while featuring photos and video from the series.

The tweets went beyond merely rehashing the story. They also offered a behind-the-scenes look at what it took to report the story, and the sensitivities they had to address.

We often had to conceal identities, like in this image, which made the process a little more challenging. pic.twitter.com/Yq7Ty5kRTW

The result was a comprehensive summary of the piece that met Twitter users where they were, reusing socially-optimized material like videos, images with quotes and a GIF of the front-page design, with several of the tweets being retweeted hundreds of users.

2. Making sense of a tweetstorm

Post reporter David Fahrenthold made it his mission to fact check the claims of presidential candidate Donald Trump’s charity work, and he wanted people to know he was working on it.

Fahrenthold decided to publicly report his findings through a series of tweets, tagging several nonprofits and charity organizations, all the while posting photos of his notes, scrawled on a legal pad.

Why handwritten notes on paper? Because no one would notice a photo of a spreadsheet. The pen-and-pad approach was chosen specifically to grab people’s attention, in addition to showcasing that his efforts were on-the-boots traditional journalism.

Rather than leaving his efforts in the ephemeral Twittersphere, The Post Politics team collected all of Fahrenthold’s tweets into a single Moment told in chronological order. The story, “Trump promised millions to charity. We found less than $10,000 over 7 years,” was later published. Because this was a Twitter-first effort, it made sense to memorialize it within the platform, which proved to be an easy-to-follow story that was retweeted by thousands, letting the world know Fahrenthold has owned this story.

In anticipation of President Obama attending his final White House Correspondents’ Dinner, The Post social team worked with the video team to create a Moment that was essentially a Twitter-first listicle of Obama’s best jokes throughout his term.

To optimize for the Moment, each video clip was edited for viewing on a vertical screen, something our video editors are readily trained to do since The Post debuted its vertical video player.

Publishing the Moment was timed just the day before the final dinner, for timeliness and to meet an audience expectation to reminisce on the last seven years of Obama as a comedian. Twitter’s Moments team also prominently featured it in their Moments tab that week, which gave it more visibility while there was high interest.

The tweets were sent out from the @PostVideo account, giving far more exposure to the account and resulting in thousands of retweets and really strong user engagement.

“I have something that rhymes with ‘bucket list.'” https://t.co/nh3DPHsKRo #WHCD #WHCD2016 pic.twitter.com/O2lxvT2L0o

4. The recurring feature, and highlighting a personality

Post cartoonist Ann Telnaes has made it part of her work to sketch news events as they happen, such as one of the millions of debates during this year’s primary elections. Her pencil also brings life to visually droll news stories like a congressional hearing on Benghazi.

She would sketch and tweet as the event unfolded, and I worked with her to compile the tweets into Moments which were published immediately to compliment  the conversations happening around them, like the GOP and Democratic debates. This was also replicated with last year’s Benghazi committee hearings.

Telnaes’ Twitter audience not only came to expect these Moments every debate night, but by diligently sketching, compiling and publishing them, she was able to expand her audience throughout the past year. When we began, she had about 5,000 Twitter followers. Today, her follower count has grown to more than 13,500.

5. It can be a traffic play too

Moments can also help to increase readership. When the tool launched, links were not supported to be displayed within Moments.

That changed in March, when Twitter announced support for links. If you noticed in the Obama joke Moment, The Post added a link to an analytical Style piece on Obama as the first alt-comedy president.

When a user finds a particular tweet in the Moment they like, there’s the possibility they would retweet that individual tweet, rather than the full Moment, so it’s important to be strategic about when and where links are placed with the tweet.

In a second follow-up Moment from Fahrenthold’s reporting on Trump’s charitable giving, a link to his complete, reported piece appeared in the second tweet in the sequence. This was intended to give readers the full context and impact of his reporting right away.

Twitter Moments can be a tool to  amplify stories, reporter profiles and past work by helping to elevate our journalism on Twitter.. Each Moment must have a strong lead, a narrative, multimedia elements and analysis.

As such, a Moment can be teachable for journalists since success relies on all the elements that make great, traditional journalism.

Gene Park (@GenePark) is a social media editor embedded with the Opinions and Outlook sections of The Washington Post, and vice president of the Asian American Journalists Association in Washington, D.C. He was most immediately the engagement editor for nonprofit investigative news site Civil Beat, and a former reporter and columnist for various publications in California and Hawaii.