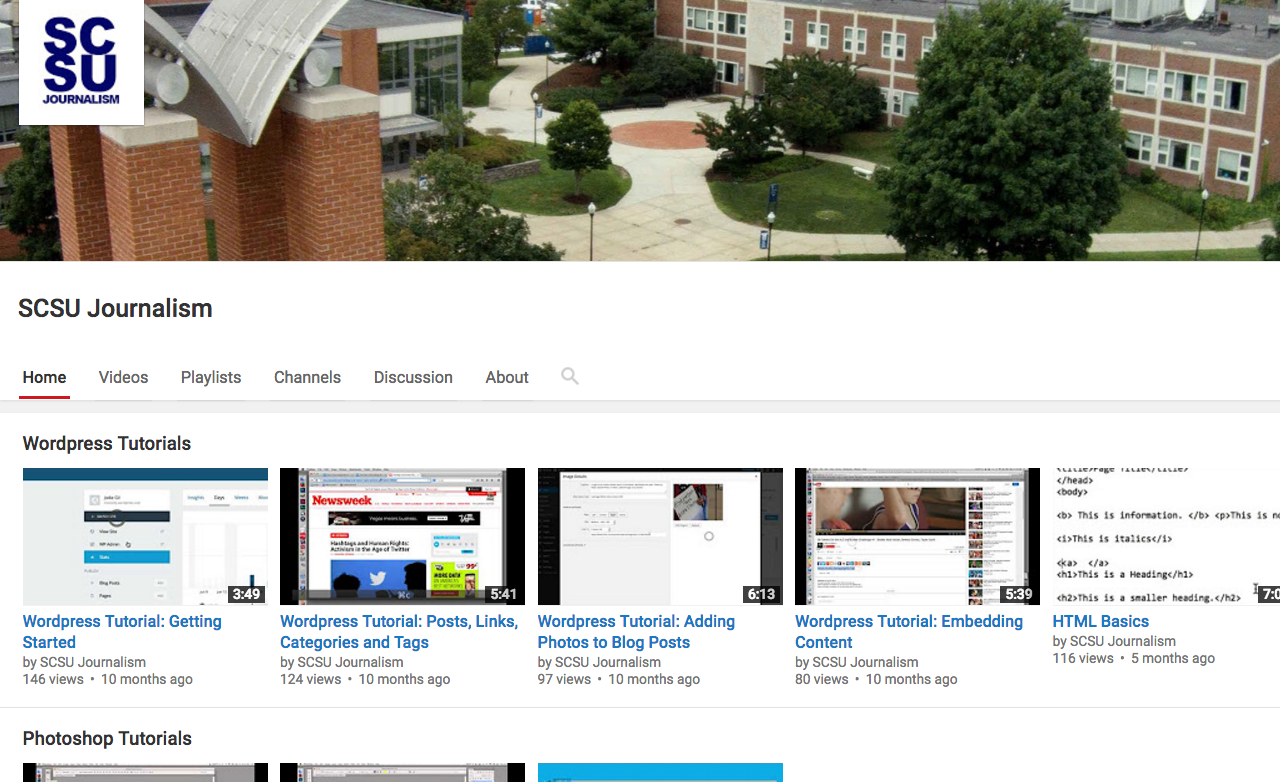 My colleague Vern Williams and I ended the 2014-15 academic year with an idea: We wanted to “flip” our Digital Media Skills class at Southern Connecticut State University.

A month later — propelled by our time spent at two professional development workshops — we turned that idea into a plan. By the time school started up again last August, we had published about a dozen short tutorial videos to help our students.

Williams and I wanted to spend less time talking about the mechanics of the software and more time focused on the application and ethics.

We came full circle this June, when we presented our work to a group of journalism instructors at Poynter’s Teachapalooza. That’s where I first got feedback to help us launch the project, and after the second round of professional development, we’re now planning ways to refine our stock of videos for next year.

Our department offers three to four sections of Digital Media Skills each semester for journalism students and others looking to fulfill a university technology requirement. We teach the basics of digital tools, such as Photoshop, InDesign, FinalCutPro, Adobe Audition, content management systems and Microsoft Excel.

Williams and I wanted to spend less time talking about the mechanics of the software and more time focused on the application and ethics. We figured tutorial videos to support our in-class instruction would help free up classroom time.

Last June, with these ideas fresh in our heads, we headed off to two separate workshops: I went to Poynter’s Teachapalooza; Williams to the Methodology Workshop hosted by MediaStorm in Brooklyn, New York.

We sat in sessions on topics ranging from editing large-scale video projects to incorporating math into journalism lessons.

More importantly, we connected with others like us, who were looking for ways to do better by their students. That combination of fresh ideas and professional feedback gave us the tools and the drive to complete the first round of our video tutorials. You can view them on our department YouTube page.

There’s something important about bouncing ideas off others, getting a fresh take on a project.

We felt it through our own experience. Recent research backs it up.

A 2012 study published in the American Journal of Education found that pairing content-based professional development with continued networking with colleagues can have positive impacts on the way teachers teach.

Perhaps that’s one reason why I got so much out of my time spent at Poynter’s Teachapalooza workshop. Participants spend two and half days in sessions targeted to journalism instruction, then continue the conversation through a Facebook group that grows each year.

At the end of Teachapalooza in 2015, Katy Culver, a Poynter faculty member and professor at the University of Wisconsin-Madison, advised us to focus on one or two goals we could achieve based on the deluge of information we had received.

I instantly connected our goal of flipping the Digital Media Skills class with sessions led by Mark Johnson, who teaches photojournalism at the University of Georgia’s Grady College.

Johnson talked about his own tutorial videos for a digital literacy course he teaches at Grady College. Johnson said he refined his approach to producing the videos after he noticed a student watching one on his cell phone’s small screen. Now he uses large text to help drive the audience through the content.

He showed us how to easily incorporate closed captioning through YouTube, an important way to keep the videos accessible for all students.

As Williams and I developed our own tutorials, we created large-text chapter markers to help students skim through the contents and find the relevant details easier. Our initial research into the video analytics shows that viewers do use the title markers to navigate through the videos.

After looking through MediaStorm tutorials Williams received at their workshop last summer, we also decided to add summary chapter markers at the end of each video to help solidify the contents of each video.

And we decided to add drone footage of our campus to the beginning of each video, to take advantage of Williams’ research and help add consistent branding throughout the series.

I would have felt satisfied if I walked away from Teachapalooza with just Johnson’s advice. But I get to continue the conversation each week with the same journalism instructors through the Teachapalooza Facebook group. Discussion topics range from the big picture stuff to the nitty-gritty of teaching journalism.

One example: Before classes started in August, Rick Brunson, of the Nicholson School of Communications at University of Central Florida, posted a suggestion for an ice-breaker he used in his own journalism class.

Brunson had students pair up, and look through their phones for pictures that defined their summer vacation. They used those photographs as a starting point for their introductions of each other. He said the interaction set the tone for a class that would be filled with interaction.

“Lesson?” Brunson wrote. “Leverage the device they already sleep with.”

I’m sold on the idea of using professional development and collaboration to fuel big projects like ours, and to infuse daily interactions in the classroom.

This past year, Williams and I have continued that process at our university, sharing what we’ve learned in faculty development workshops. And we brought back highlights to a new round of journalism instructors at the 2016 Teachapalooza workshops.

Based on the Teachapalooza sessions we attended and early feedback from our students on the videos, we’re planning to make some changes this summer to shorten the videos and draw more viewers.

Jodie Mozdzer Gil is an assistant professor of Journalism at Southern Connecticut State University. Prior to teaching, she worked as a reporter in Connecticut for the Hartford Courant, the Valley Independent Sentinel and the Republican-American of Waterbury. She serves as the treasurer and contest coordinator for the Connecticut Pro Chapter of the Society of Professional Journalists. You can connect with her on Twitter @mozactly.